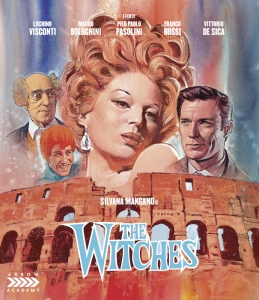 Not at all to be confused with the exact same titled Hammer Film Productions horror flick released in 1966, The Witches (aka Le streghe) is a very fine and very unusual surprise from Arrow Academy that’s worth a look if you like oddball Italian film anthologies that just so happen to feature the lovely Silvana Mangano. Yeah, Clint Eastwood is on the cover as well. But trust me, he’s not why you’ll be watching this hidden gem at all.

Producer Dino De Laurentiis had the idea to bring together five top directors (Luchino Visconti, Mauro Bolognini, Pier Paolo Pasolini, Franco Rosso, Vittorio De Sica) and set them the task of crafting am anthology film themed around Mangano portraying a different type of witch in each chapter. The results range from bizarre to compelling, but title aside, this isn’t a horror film at all. It’s more a showpiece of Mangano’s acting talents as well as a not so subtle look at some of the actress’ struggles with fame and fortune (be it up or down)throughout her career.

Visconti kicks things off with the film’s longest chapter, The Witch Burned Alive, which features Mangano as Gloria, famous fashion model and actress who runs away from her husband to attend a friend’s party at a ski resort. We find out she’s disliked with intent by some of the women there while all the men desire her. This turns to a night of deception and deconstruction after Gloria faints and the women peel away her makeup as they attempt to make her comfortable. Gloria eventually flirts with two of the men, but has no intentions of sleeping with them. She’s got a secret that plays out in the final few minutes that also shows her reconstruction back to what’s basically a false persona as the chapter ends on a somewhat haunting note. 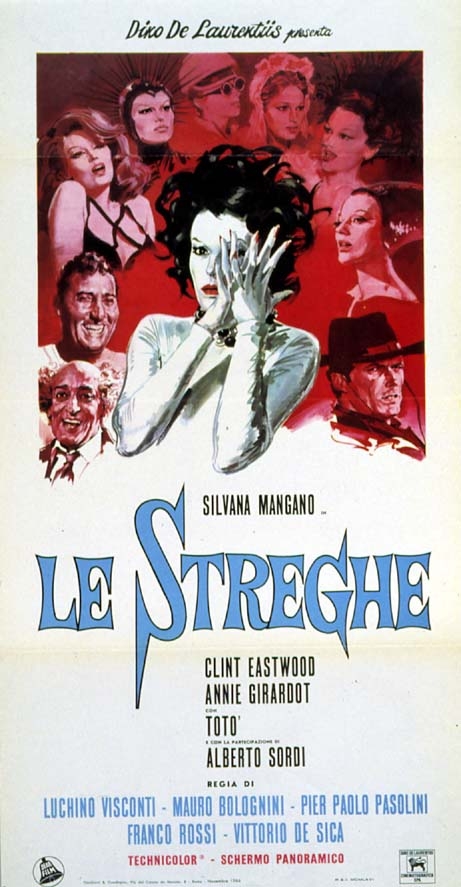 The second chapter, Mauro Bolognini’s Civic Sense, is a short, sharply comic bit where Mangano picks up a man (Alberto Sordi) who’s had a bad truck accident and offers to race him to the nearest hospital. Let’s just say she’s a witch here of the type that uses the disadvantage of others to her benefit. This one’s lean and mean in that way good satire tends to be.

Next up is Pasolini’s very weird The Earth As Seen From The Moon which was also written by the director. It’s a sort of sci-fi fable and homage to Italian comic books and Charlie Chaplin’s work about an old man (Totò) and his young son (Ninetto Davoli) looking for a new wife and mother after the previous one dies. After a year of no success, they find Mangano’s deaf/mute “witch” in silent prayer in front of a shrine and the old coot falls madly in love with her.

The pair quickly marry and the newly named Absurdity ends up changing the two men’s lives by cleaning up the hovel they live in and making it a colorful, more homey dwelling. However, the old husband covets a better and larger home and ends up getting poor Absurdity to mime out a suicide attempt in order to raise some fast cash. Let’s just say things don’t go as they should thanks to a rogue banana peel. But you get a somewhat amusing conclusion along with a moral that might get you scratching your head if you don’t get it.

Franco Rossi’s dark but intentionally hilarious The Sicilan Belle is next, another super brief bit with Mangano playing a somewhat witchy woman who thinks she’s been slighted by a man who’s made what she feels is a pass at her that should have been a marriage proposal. She eventually confesses to her father the man’s identity, and yep, he promptly shotguns every man in the village over what seems like a single day. The ending, with a screaming Mangano crashing the mass funeral (complete with bodies on ice!) will either make you bust out laughing or have you wanting to avoid accidentally looking sideways at a beautiful Sicilan gal with an easily ticked off father.

The final chapter will be of interest to Clint Eastwood fans and not because it’s the best work he’d done to that point (or afterward, for that matter). In fact, it could be said that Vittorio De Sica’s quite gorgeous to look at chapter, An Evening Like the Others is the weakest link here because of Clint’s performance. He plays Mangano’s harried husband, a hard working American in Italy married to a woman who thinks he’s grown dull and endlessly fantasizes about the days when he was more excited about coming home to her. While Clint and Silvana make for quite the handsome couple and have some nice chemistry, he’s a bit out of his element here because it’s all Mangano’s world and he’s just living in it. The reason he’s in the film was because he was the hottest thing in Italy at that time (thanks to his work with Sergio Leone) and De Laurentiis knew Eastwood’s name would fill seats.

As he and Mangano argue and banter a little, it’s revealed that he’s still madly in love with her, but she just doesn’t appreciate him, preferring to live in a fantasy world where she makes fun of his morning face while also dreaming of idealized versions of herself strolling down Fellini-esque streets packed with men who admire her as well as superheroes who pass her around like a jug at a frat party. She seems to realize he’s still crazy about her at the end after he falls asleep as she’s embracing him as he’s discussing some sexy vacation plans. You get the best lines in this segment here and the look on Mangano’s face as Clint is describing what he’d like to do with his wife is pretty hot stuff for a second.

The commentary track by Tim Lucas notes that the film was structured so Clint’s chapter was last because the idea was to get people to watch the entire film and not just one chapter if it were placed at the beginning. He also notes that Visconti’s chapter would have probably work better as the climax (and I’d agree), but as it stands, the film is well worth a watch if you’ve never seen it before.  In terms of the 2K transfer, it’s okay overall, but some portions seem a bit grainy or there seems to be a filter of some sort that was used to shoot certain scenes. My review disc had no other special features save for a shorter English cut of the film and that aforementioned Tim Lucas commentary, so I’m gathering I’ll eventually commit to picking up the retail version for the booklet featuring new articles on the film by Pasquale Iannone and Kat Ellinger.

As a pure curiosity piece, The Witches works extremely well and makes me want to take a look at other Italian anthology films at some point. So, yes indeed you can call this a buy as well as another cinematic appreciation lesson straight from Arrow Academy.

4 thoughts on “Blu-Ray Review: The Witches”