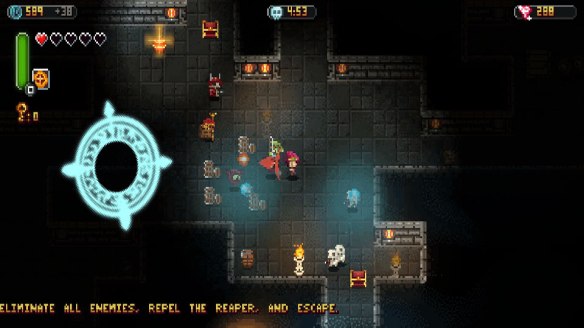 Instructions for real life, as well.

Nostalgic is the good word here.

The latest pairing from COWCAT and Diabolical Mind, Demon’s Tier+ ($9.99, buy it!) is an excellent example of a really good game that got much better with a slew of quality of life improvements. While the game follows a clear Gauntlet meets Diablo style of play, a strict time limit and intense difficulty combined with randomly generated levels make for quite the thrilling, replayable ride.

This isn’t a simple “one and done” trophy hunt at all. Rather, the game is an equal to Diabolical Minds’ other retro-inspired pixel-packed releases, Riddled Corpses EX and Xenon Valkyrie+, two other solo or  two player co-op team-ups worth a look. It almost feels like the developer has captured a trio of long lost late 80’s arcade machines in these three titles, all of which demand practice and patience to master, just like the old days.

Thosgar, a hated king attracted by demonic rituals, turned into a dark and diabolical being… destroying almost all of humanity and flooding the world with monsters. This story became a legend and peace returned to the land.

A thousand years later, a mysterious pit appears in a village after a huge earthquake where an evil aura emanates from…

Will you be the hero to save this world?

Don’t you hate it when that happens? Well, good. Grab your PS4 controller or Vita, and let’s send those demons back to where they came from, pronto.

It won’t be easy, though. Initially, your chosen character’s range, attack and speed are limited and the sole means of upgrading stats comes after surviving a level and spending currency gained in that level. You keep your new stats, but dying in a new stage has you needing to recover your corpse and not expiring a second time, a nice Demon’s Souls/Dark Souls series touch. New characters also have to be purchased as you gain enough funds, so there’s a risk/reward thing going in surviving the stages. While levels can be blazed through quickly in some instances, sticking around to gather more funds or clear out as many or all the enemies in not only a good idea, some maps require this as a main goal. Mission goals and levels are randomly generated, so the game will aways have you on your toes in each five-minute (or less if you get too lucky) stage.

There’s a reaper who appears after time expires and it will sap you health as it slowly floats along and gets too close to your character. Finding the exit, having extra health to survive a reaper attack until you escape the level or using a level exit rope in an emergency will help, but that latter method will have you restarting on a new random map with no upgrades. Keep moving and dispatching enemies, then tackle the intense bullet hell of the bosses every three stages, make it as far as you can, but feel free to mess with the customization elements as upgraded skills will be a huge benefit and you can upgrade your character in many configurations. Using the blacksmith get you new gear from recipes you discover, and you can buy relics from a seller that come in might handy, such as keys to rescue prisoners or unlock certain items.

“Oh, this old thing?” Relics can make you survive the dungeons a bit longer.

Like the other COWCAT-ported games, you get the aforementioned improvements on consoles (fear not, the PC versions have also been updated), the retro chiptune music is pure bliss, and the replay value is endless because even when beating the game, there still a great deal to do if it hooks you in. Trying each character class is a great thing, as they all play differently and discovering the strengths and weaknesses of each is quite fun (and even more challenging). My only wish would have been a option to shut off the timer and play more freely as a option from the outset, but that would sort of defeat the tense nature of the gameplay’s rogue-like nature and maybe make things a tad to simplistic. But as a fan of most all things dungeon crawly, I’d still play this to death. Scanlines off, though, as my aging eyeballs need a rest and thankfully, the game lets you tailor its looks.

One more thing: This also working on the Vita as a Cross-Buy title is a HUGE plus, especially as I see more people seem to be finally discovering Sony’s small but mighty handheld through assorted yard or other sales and wanting to play games made for it when they can get them. Kudos for COWCAT for keeping that flame going, even if they’re catering to a small segment of the marketplace. Anyway, pick a platform: PC, Switch, or Xbox One, and go get this game as it’s a winner that brings plenty of challenge and a lot of nostalgia where it counts and that’s alright by me. Oh, and there a very limited edition physical version if that’s the way you fly. Go get it here.

A tiny town with a big hole in the ground means DEMONS. Remember this.