“Snakes… Why’d it have to be snakes?” 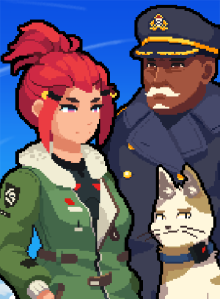 A pilot, a Captain and an engineer walk into a bar…

Today, ace pilot Ash Leguinn joins the ranks of the many other legendary arcade shooter ladies who fly and blast enemies out of the sky with the release of indie developer Code Wakers’ Jet Lancer on PC and Nintendo Switch ($14.99) published by Armor Games. Having put in some playtime with an earlier PC build and and after playing the Switch version for a spell, this writer can say it’s quite a challenging mix of acrobatic flight combat against waves of enemies and some pretty large and tough bosses.

Ash travels from mission to mission on a small aircraft carrier piloted by a Captain who doles out briefings as she accepts them. Others in need of aid from Ash’s skills will pop in with their own requests as the game progresses, and you’ll get a talking cat engineer named Lem early on to upgrade your ship, the LANCE, as well as that aircraft carrier it travels on. The boat is sea bound until you get an upgrade that allows it to move over land barriers and the map unlocks more missions and plot elements.

While it looks like a basic side-scrolling shooter from screenshots and snippets of game footage, levels take place in small areas where you’re limited to flying left to right plus any acrobatic movements Ash pulls off. In other words, fans of the simple-looking but stellar shmup from a few years back, Luftrausers, will be in for a treat. Barrel roll dodging, boosting, and precision shooting with an increasingly varied weapon selection Lem will install once they’re gathered and with 28 different guns, payloads, and flight components to collect, you can tailor the LANCE to whatever missions throw at you. The game has 30 missions, 11 bosses and there’s even a New Game+ that adds a nice set of even more tricky foes and some cool new LANCE upgrades. There are a couple of options that allow a few gameplay tweaks, but try not being tempted by a few until you play normally for a bit.

You can’t fly the friendly skies if they’re not too friendly.

While the flight action might be little tricky at first for new players, it’s manageable when you grasp the control scheme and maybe run a few early missions multiple times to get accustomed to things. Missions are generally short and while you can take your time here, the game encourages speeding through maps as fast as possible and with as many combos and different moves as you can pull off. Yes, you’re ranked and graded for stuff, so getting that “S” ranking for everything will take a lot of practice for non-experts. The experience is definitely loads of fun, although I’ll have to say that the overworld map the air carrier travels around is a bit too bland. The flight combat in the absolutely game soars. though. As noted above, that increasing loadout count makes for some nice variety when replaying maps.

Some missions end a bit too soon, but the game seems meant to get a “Let’s go for that high score!” thing going and on that front, it works excellently. As this one’s on PC and Switch only (so far), it’s coming recommended if you own either platform and want a game that feels a bit nostalgic, but fresh on a few fronts. Play in docked mode if you don’t like tiny Bangai-O sized planes and squinting if your eyeglass prescription need to be upgraded like mine does. The bosses are, thankfully very easy to spot in docked or handheld modes. They’re mostly frightfully huge and trying to ruin your day with lasers or other ordinance. Oh, and text in the game is quite readable no matter which mode you choose to play in. Recommended.

The last time I listened to a talking cat, I was cooking mice with rice om my stove… for the cat.