While it’s a tad barebones when stacked up (heh) against its other ports, the M2 version of SEGA’s classic Puyo Puyo is a pretty addictive gem. I had to put off my review thanks to a friend who wanted to school me being a bit ill, but man, I walked right into her trap because even though she was still a bit under the weather when I dropped by to see if she was up for a surprise gaming visit, I was a smoked duck almost as soon as she started playing, drawing a few hearty laughs out of her husband, who refused to play with a “Well, she’s pretty good, even though she’s sick” mantra he fell back on almost every time I lost a round. No, he’s not a big gamer, but he does know from about 20 years of wedded bliss she’s a total monster at games like this.

Yes, there are the much beefier Puyo Puyo Tetris and more recently, the online-centric (and less beefy) Puyo Puyo Champions to scream at (she has both). But this one’s special to her because it was an arcade staple of her growing up in Japan. Well, there was also the hefty bragging from her and a few humorous warnings not to play her by the hubby every so often.  Those alone were reason enough to get a review code. Well, I also was curious see to how good (or badly) I was going to get beaten. Let’s just say I wasn’t disappointed by the near total routing I received. Or, I was, but too bruised up to say much in my defense, heh. Ow.

Looks simple. is surely not…

While the game is cute as heck and colorful and all that, it’s pretty hardcore when you start playing a true master. Or someone who complains the game is too slow when you try and take it easy on her because you think she’s too ill. Heh, she wanted to speed right through things (boy, this game has a way of reviving the near-dead), but relented after waxing me in something like nine matches straight on a harder level. We took it down to the most basic level for a bit, but I was still losing more than winning (hey, two straight out if a dozen was my best effort, but I did win a few single matches here and there). It’s not that I was playing poorly all the time, mind you. It just that in the hands of a good player, a win at the game can be a hard thing to achieve.

M2’s port is superb, containing the translated English and original 1992 Japanese language versions of the game. Some new elements have been added like online network battles, rankings, and reverse rotate control, but the core gameplay is the same. US gamers might know the Genesis/Game Gear/Master System console port as Dr. Robotnik’s Mean Bean Machine, so this is a chance to see the differences (which are pretty major in a few ways outside the gameplay). It’s too bad that Robotnik’s game isn’t part of the package so some gamers could make the connection, but M2 is this case, preserving the arcade version for all to experience. That eight bucks (plus tax) is getting you the 1992 original plus a few tweaks and that’s that. 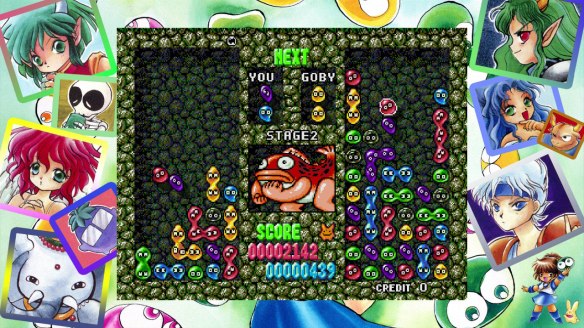 Hey, you’d be a praying fish too, even as a atheist versus a skilled player.

Still, it’s a solid recommend just because it’s not a game you’ll master on day one unless you’re some sort of king, queen, or whatever you like to call yourself of gaming. Even then, it’ll be off to see how well you do on those leaderboards, I bet. Then again, I challenged her to a few Gain Ground matches after I saw she had it installed on her Switch and yeah, I lost too (not by much, but still). Turns out the arcade version was another one she played a lot of growing up in Japan, oops. Ah, nostalgia…