La calma prima della tempesta: Ray Milland as Inspector Thompson does a bit of gardening (sans FROGS to interrupt him). 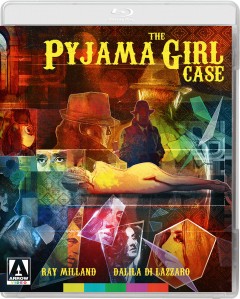 Loosely based on a true story (that’s still a tad unresolved), Flavio Mogherini’s 1977 film La Ragazza Dal Pigiama Giallo (aka 1978’s The Pyjama Girl Case) is a pretty depressing flick to sit through when all is said and done. It’s skillfully edited to spool out two tales: one of a retired police detective (Ray Milland) coming back to work on the trail of the person who murdered and mutilated a woman, and the second is the story of Glenda (Dalila Di Lazzaro), a Dutch immigrant who comes to Australia, gets a job as a waitress and later ends up a victim of a particularly horrifying crime.

Even more horrifying are the police coming up with the idea to preserve and display the unidentified remains to the public (yes, this actually happened in real life for a whopping ten years) and painfully getting information though beating up a few suspects (not sure if it’s 1977 addition, but man, is it so not an OK thing to do even if a guilty party is eventually found). Nevertheless, Milland is clearly having a blast in his role, and Di Lazzaro is a lovely, tragic victim you want to see not a bad thing happen to. The film even makes you feel sorry for a suspect in her murder, but you’ll have to watch this to see how the director plays that out.

In fact, save for Milland’s Detective Thompson who’s eager to take on the case, most of the detectives and investigators here seem to be all too happy (and incompetent) with finding the quickest means to end the case, even if it means one seemingly obvious suspect is discovered early on who’s a pure creep and not a killer. This adds an air of hopelessness to the narrative as the film plays out and you witness the results of haphazard work (save for the one man who should be home with his flowers). Granted, poor Glenda would still be deceased even through the shoddy police work, as Detective Thompson is only called after she’s been disposed of. 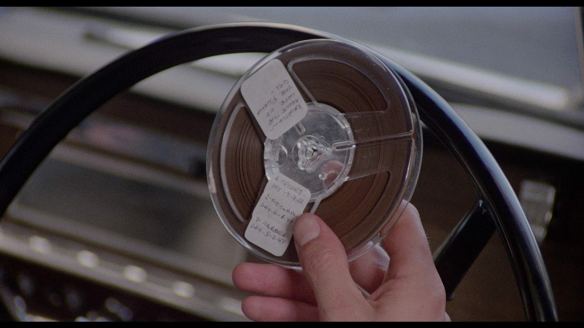 This tape will NOT destruct in five seconds, unfortunately for some people.

There are some great location shots here and Mogherini gets some really excellent performances from a varied cast overall. Added plus: Riz Ortalni’s disco-ish score, which should be distracting, but keeps the film’s beasts going where they lead. At the end if the day, this is more of a “true crime” story over a giallo, save for the violently mutilated corpse that pops up for a few scenes. It’s a disturbing sight because it pretty much seems to echo what happened to the corpse way back in 1934.

You also get some suspenseful seconds where a bit of surprise is in order (things come out of left field for one character), but some the more hardcore fans of the genre will probably want something a bit more flagrantly nasty at the end of the day. There’s some nudity and sexual deviance here as well, but as presented here, most of it’s perhaps not what you’re looking for (not surprising in a film so intently disturbing as this can be). While not the first film you’ll think of when it comes to terror-filled things, it’s a sure bet that this one lingers a bit if one has the slightest bit of empathy for a few characters here.

While it would have been nice to see more about the actual case this film is based on as a special feature, it’s some extra detective work some might not mind looking up for educational purposes. An excellent transfer awaits you as usual from Arrow and in terms of nice special features, here’s what else is on the superbly nice Blu-Ray version:

Overall, its another Arrow winner here,  but some may need a good comedy to wash away the muck afterwards. Or a giallo that’s more scary, if that’s your thing.

Dalila Di Lazarro as Glenda, about to make an odd decision.