Do you love challenging puzzle games with a mysterious vibe? Well, Iris.Fall ($14.99) is waiting for you with open arms to tickle your brain for a spell. Developer NEXT Studio had crafted a lovely and often deviously designed game where your brain will get quite the workout and playing at your own pace is welcome. This isn’t any sort of action or platforming game where you’ll need to worry about enemies and assorted hazards. Nope, what you have here is a well crafted gem that plays with some of those conventional elements by adding them to the game as puzzles that need to be solved in order to progress.

Not a place to lose a contact lens, that’s for sure…

After awakening from a dream, Iris follows a black cat into a dilapidated theater, traveling back and forth through a strange labyrinth of light and shadow. As the story unfolds, Iris begins to realize that everything in this theater seems to have some kind of hidden connection to herself.

The story is played out wordlessly and is a bit vague at the start, but things fall into place as you play and pay attention to each reveal as well as interact with certain objects. I won’t go into detail because the game’s more of a “play it and see where it goes” deal and it’s also a relatively brief experience that feels like a bedtime with a somewhat unsettling tone. Puzzles start out simple enough, but ramp up to be some pretty solid brain twisters that require a bit of deep thought. Most of them will have you scouring the lovely artwork looking at and for clues to progression, but some are variants on classics found in plenty of point & click adventures. Connecting wires in a circuit box or shifting parts of a puzzle inside a small box, for example, and there’s a multi-part sort of Rubik’s Cube-inspired sequence in one area that’s a cool diversion while it lasts.

Certain puzzles involve room and or spatial manipulation and range from great to intentionally frustrating because the game just puts you into new rooms and outside of showing you each new puzzle, lets you do all the work. Thankfully, the optional hint system is pretty helpful although you still need to put in the solving effort, but you’ll at least have an idea where to begin in most cases. The level of detail here screams out for Big Picture mode on Steam, although if your puzzle solving skills are good enough, you may not need that extra size because you won’t be in most of the rooms that long. Iris’ ability to shift between normal and shadow forms is used excellently (as noted in my preview, the game slightly echoes Hudson Soft’s/Konami’s Lost in Shadow minus the combat system). 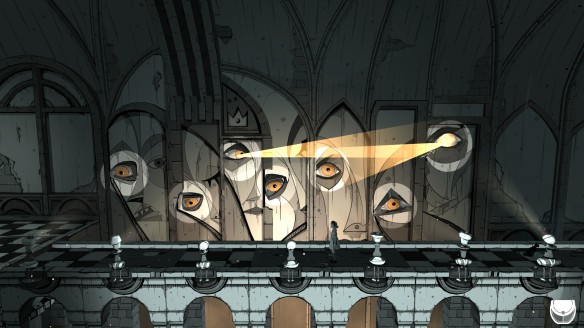 The eyes have it: or, the closest thing you get to a boss battle in this game (but nope, no fighting here).

As you can see, the game looks exceptionally gorgeous throughout, featuring a mostly monochrome palette and some pretty solid animation that while not quite Forgotton Anne level, is still commendable overall. The soundtrack is mostly atmospheric and adds a nice low-key tone that never overpowers the gameplay, but enhances it. If there’s a caveat here, it’s that the game will likely be a bit on the short side for puzzle experts and those who tend to play through their games in one sitting. Still, I’d love to see NEXT expand on what’s here if they plan a console version by adding more areas or even padding out the story in one way or another. I guess we’ll need to see how this does on PC first, but this one comes recommended if you love indie games with fantastic artwork and gameplay that’s going to work your grey matter and not your trigger finger.