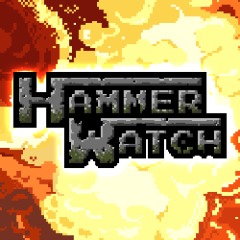 For the record, Hammerwatch isn’t a RPG at all. If anything, calling it one is akin to calling Gauntlet (the arcade classic it pays homage to) a sports game. Granted, you do indeed get the fantasy trappings of classic RPGs in the form of assorted deadly dungeons to navigate, ticked off hordes of enemies trying to do your character in and other familiar touches. But there’s not a shred of story here, no gear to buy, your little character is mute, and the only expository dialog you’ll read comes from a few NPCs in set locations who offer very brief tips or warnings that you’ll want to pay attention to. Oh, and your party kind of kicks you to the curb at the beginning after a bridge breaks and you’re stuck having to go the long way around to catch up to them. What, someone forgot to bring a good length of rope?

This is a actually a good, no, a great thing, as the game excels at letting you have at what it tosses your way you want as you try to survive. Enemy generators, traps galore, invisible walls, area warps and many hidden secrets await the brave ones with ten bucks to spare. Trust me, folks – this is probably going to be the best ten bucks you’ll spend on any game this (or next, if you’re reading this in 2018) year. The main campaign is lengthy, there’s an extra chapter expansion and while online play is coming in a patch (hopefully along with mods that the PC version has had for a while), you can still grab up to three friends and play a good old-fashioned couch co-op session for the time being.

Truth be told, solo mode through the campaign is the way to go if you’re new to the game or just want a challenge from the get-go. Each of the five classes has its strengths and weaknesses, but the Archer has the longest range and a later gained spin attack that allows him to take out enemy generators and nearby enemies en masse when you come across them. The new to the game Sorcerer is also quite cool with his ice-based spells and skills. I haven’t tried the other classes outside of messing around with them on the PC version a while back, but as my personal preference is playing keep-away in games like this, ranged is my jam for the time being. Update: Well, here’s the Wizard in action – I think his range is too short compared to the Archer, but he’s not bad at what he does:

Anyway, the flow of the game is dirt simple. Enter dungeon, kill many enemies, collect gold, extra lives, health and mana pickups and shop discount coins, find as many secrets as you can, unlock boss room, fight boss. Rinse and repeat, but on new floors with increasing difficulty. Two big things of note are dungeon traversal will have you going to multiple floors in order to unlock boss rooms and secrets, and collecting as many of those shop discount coins as you can before doing any heavy buying is key to surviving the later areas. There are a few save points on each map, so dying (which will happen with enough frequency in some areas) only sends you back to that last checkpoint minus a life.

Finding extra lives isn’t too difficult, but expect to do some heavy brain work in some areas where you can see those Ankhs but can’t reach them until you go through a few cleverly designed hoops. While you do get five extra lives from defeating a boss or via certain secret areas, you’ll want to try and stay healthy for as long as possible. Your armor and weapon don’t change at all, but you’ll need to upgrade basic and mana-using skills as much as possible so the later maps don’t crush you outright. They’ll crush you at some point, but being the best prepared future dead adventurer you can makes for a better fight when you do expire.

As you can see, the pixel visuals are perfectly done and yes, those Gauntlet-inspired bonus maps are genuinely grin-worthy. The nice thing about them (and the main game) is you don’t need to worry about shooting the food or anything else other than those pesky enemies. Also, other than some mages who have homing shots, archers that have better range and a few other enemies, you can set yourself out of range and pick off a wave of enemies rushing your way. That said, don’t expect to do this on every level. Teleporting enemies, off screen shots and a few very deadly spoke and fire traps can ruin your day in a hurry unless you pack and use an invincibility potion for temporary relief. This last bit of strategy comes in handy as the game only allows you to carry one potion at a time and using it at the right moment can make the game easier or much harder than it needs to be.

In addition to the main game and Temple of the Sun expansion content, there’s a very (VERY) brutal Survival mode you’ll die a great deal on and a Hero Defense mode that’s a bit less frustrating, but is made to kill your character off if you make too many mistakes. That said, probably the only real downside to the game is the crummy CRT mode that will get you killed because it emulates analog TV too well and it’s a case where scan lines may look good aesthetically, hut tiny arrows and deadly plant spikes are harder to make out when you’re trying to scoot through trouble. Eh, to each his or her own, I say. I tried it on the PC version and hated it and on the PS4, it’s more of the same. Your mileage may vary, of course.

Anyway, go get this game on anything it’s currently on. The upcoming update will add online play and hopefully modding or at least extra levels to download and play at your leisure, making that measly ten bucks you’ve spent even more of a wise decision. Now, if you’ll excuse me, I have a boss to kill and one more level to explore. And yep, I’m going back in as a new character at some point. Well, next year (which begins in what, about an hour and a half?). Hey, I’m staying in for this cold-ass New Year’s, so you know where to fine me if you need anything. Just don’t expect me to get up to answer the door.