Last year, the first chapter of Too Kind Games’ gorgeous, excellent and challenging platformer Pankapu made for a pretty captivating experience on PC and now it’s on PS4 as a complete game that’s equally beautiful and a must-play for genre fans. Bold, colorful visuals, blend with with solid, satisfying gameplay and an initially simple story that changes into more than the bedtime tale it starts out as.

Don’t let that stunning color palette and super-cute art here fool you one bit. This is a seriously tough game at times thanks to the dead-on jumping and combat skills you’ll need to succeed. Initially, you’ll play as a sword and shield-bearing warrior type, but Archer and Mage Aegis outfits eventually appear and add more combat variety as well as pros and cons. Swapping between all three Aegis types, often on the fly makes for some pretty fluid navigation when things go right. On the other hand, enemies and assorted traps can ruin a good run if you make too many mistakes. You will, trust me – Pankapu can be quite hard at times. I’m looking at you, Tokatanka (grrr!)

The bedtime story read by a father to his rattled child works on a few emotional levels. But at its core, the game is a familiar platformer/collection fest with varied levels, a ton of secrets (expect backtracking and scouring areas for goodies) and some fearsome boss battles. Keen-eyed gamers with long memories may see a mixture of Rayman and the Trine series, but there are other elements gently lifted with love from classic arcade and console games. Some very light RPG-like progression with 30+ skills to learn and copious lore entries to peruse as you uncover new areas keep things from getting dull.

Actually, you’ll want to be wide awake for this game because it’s impossible to play unless your skills are on point (as the kids say). While levels have checkpoints to restart at should Pankapu die, restarting some stages can be particularly frustrating if you’ve made it through by the skin of your teeth the first time or you get zapped by some environmental trap or baddie right as you’re about to hit a checkpoint. Thankfully, one type of collectible extends that initially to meager life bar each time four are located. Finding them ranges from “Right in the open!” simple to “Oh, that’s not gonna work!” leaps of faith where one slip means you’ll be face-palming yourself with that Dual Shock 4. 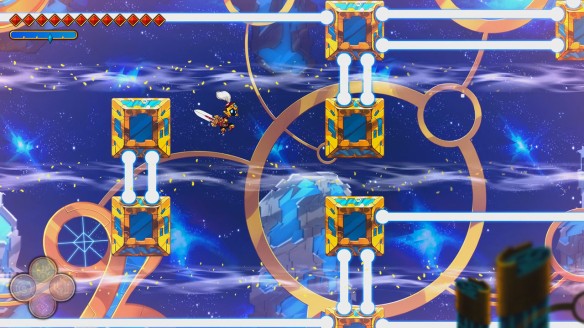 In addition to the marvelous visuals, sounds, voices and music are also great throughout. Too Kind definitely wanted the look and feel of a great animated movie or timeless storybook fantasy and the always looks fantastic. That $11.99 you’re about to spend on this is getting you an indie game that looks like a million bucks when all is said and done. I’d gather if this does well enough a sequel may get made, but I’d love to see what this developer can do with this art style and some out of work mascot character(s) looking for a revival.

Complaints are few and far between here. The difficulty in some spots might put off super-casual players or those with slower reflexes, particularly with some flying and back-shooting enemies along with the aforementioned bosses. But for everyone else, this is one of those great platformers in a year full of them. The big difference here is this is an original IP that has a nostalgic vibe, meaning it’s a game that needs an audience who appreciates what it brings to the table. In other words, go get this game, especially if you love your platformers with style to spare and a new character who deserves a fair shot at stardom.