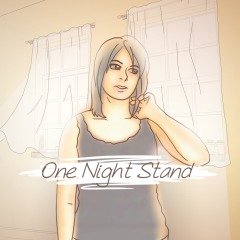 Short and simple on the surface, Kinmoku and ever busy port-house and publisher Ratalaika Games present a nifty little surprise in the form of One Night Stand, ($4.99) a game practically guaranteed to tee some prudish or easily triggered folks off (such as those expecting the usual trophy hunt from the publisher. Oh, they’re here, but it they come with a bit of baggage some can’t or won’t handle). This one’s a “slice of life” game, a visual novel where the person you’re playing wakes up in bed with a girl he met the night before and has (well, it’s an option here, but who doesn’t like a mystery?) to put the pieces together as he attempts to find out a few things about her.

Yeah, yeah. “Ooh, cooties” and all that dopey nonsense some will chime like broken bells as they whine about this game being the end of the world or bottom of the barrel or whatever. But it’s actually a pretty decent experience overall if you free yourself from any prejudices you may have Like it or not, some people in the real world sleep with each other and they’re not married and pumping out children. You can say this game is a sort of representational reality in a way of some (DEFINITELY not all) of the effects.

Granted, waking up next to a total stranger is quite a change of pace (and how!) from this publisher of budget games, but it’s a risk that pays off big in little ways. As noted, the game is short (about 10 to 15 minutes per outcome), but replaying the scenario you get will extend the story across a few branches and yes, get you those trophies you’re after. As I like to note in my reviews of these games, Trophies are the last thing I think about and games like this are excellent ways to shake thing up.

While it doesn’t overstay its welcome (you can choose a fast exit or stick it out for a bit of brief Q&A and some mystery-solving in regards to the girl and a few other things), this is the exactly the type of game where a singular focus is both sublime and cringe-worthy (in that way uncomfortable stuff is). The lovely simplicity of the art and colors chosen add a dreamlike (and kind of boozy) feeling (well, you DO wake up a bit hungover), the music in well-implemented. and the game does raise a few debate-worthy questions. 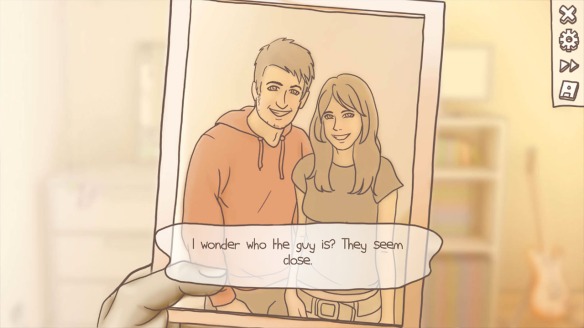 BF? Relative? Oh, the questions I have!

Some choices are of the “what would you do when…” variety, and the game offers up enough variants from hanging around and chatting, to leaving her alone, or yep, getting kicked out of her place for well, being a jerk. It’s up to you, but that’s where the replay value comes in. Yes, you can be a jerk, but you can’t choose outside the options the game gives you to be its kind of jerk (the options would be endless, I’d bet). A friend who was curious and played it liked the game and offered up a “this HAD to be created or written by a woman, because it adds more perspective to things”, which got a chuckle and an agreement from me (hey, I’m sensitive sometimes, too), but I didn’t care who made it outside of it’s an interesting experience at the end of the day that I think deserves a shot.

As noted, the subject matter may not appeal to some, but it’s not a kid’s game at all and hell, any game that’s worth talking about and has NO violence as a selling point is definitely worth a look. I say check it out because expanding one’s horizons is always a good thing.