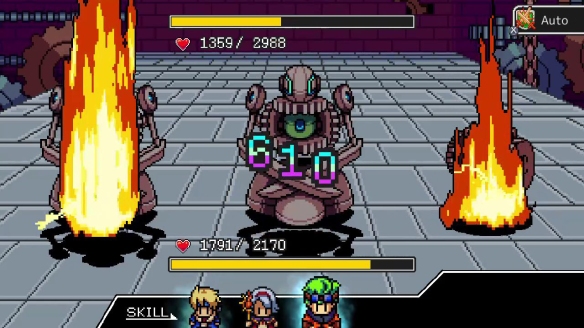 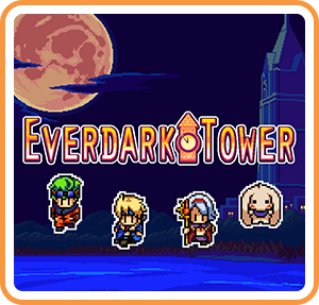 The second in Kemco’s quick play RPG series, Everdark Tower ($4.99) is a tougher game overall in terms of most battles and the inclusion of puzzle elements, yet still an easy time for veteran players. Granted the game is, like Archlion Saga before it, made to cater to novice players new to the genre. That said, expect to lose a few battles until you level up and unlock skills that make most fights in the final chapters somewhat of a cakewalk.

While the game is meant to (and can be) completed in about three hours, there’s one puzzle in Chapter Two that’s somewhat of a head-scratcher that pads out the running time a few minutes or more unless you look up how to solve it. Even then, it’s a weird bit of business because the helpful fairy that you can use to solve a puzzle earlier is nowhere to be found, leaving you high and dry unless you know the solution. I more or less stumbled on the solution after about half an hour of trying, but your time will vary (hey, I’m older and slower than most people!). 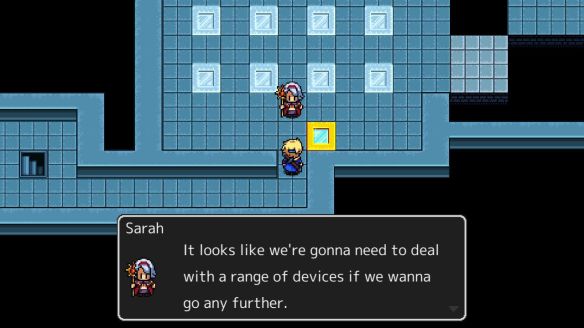 Well, most of the puzzles are easy-peasy stuff.

As with Archlion Saga, health is pooled and based on equipped gear, so the best gear you can get will help. The enemies starting in Chapter Three onward can be a hassle, but aren’t impossible to defeat with skills your team will acquire (or using stars to restart if you’re beaten). The game isn’t complicated at all save for that aforementioned puzzle, but search where you can when you can as there are a few items off the pathway you’re (optionally) meant to follow.

Par for the course, don’t expect a too-deep plot or a lot of characters to manage. You start out as a guy who’s been having an odd dream about a girl trapped in a tower where time has ceased and need to get to rescuing her before a certain incident occurs. On the way to the tower you’ll meet two others and a fourth member later on in the tower. Most of the puzzles can be figured out easily (a thrown switch here and there) but the block stepping can be pesky as noted. There are a few later puzzles that seem hard, but the random enemy fights are harder thanks to some enemies being pretty tough unless you’re rocking the proper skills.

Still, it’s an overall better game than Archlion was thanks to the ending where you get more of a positive outcome for the hero. Replaying the game from a saved slot is a bit amusing for the one-shot kills you’ll be making, but getting to Level 99 seems to be a thing to accomplish for completion freaks who want all the skills that can be acquired. That five bucks you’re spending delivers an okay albeit simple game for those with little time who want something to play that’s a decent way to pass the time on a dreary weekend. Sure. it’s not meant to compete with the greats in the genre. But it’s nice to see Kemco and developer Hit-Point make another fun game that’s easy to pick up and play in an age of overly complex mechanics. 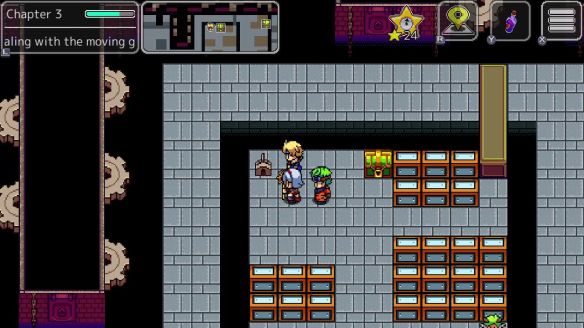 Hmmm… what happens if we flip that switch?