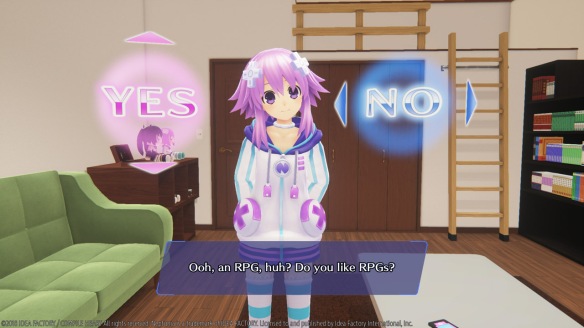 New features include partial PSVR support, tweaked gameplay, prettier updated visuals, and some new music. If you don’t own a PSVR setup, fear not. The game plays absolutely fine without the need for VR and the new VR dialog segments can indeed be enjoyed using the standard Dual Shock 4 to input basic look and zoom commands. The main game is as loaded with fun as ever and makes for a solid upgrade to the original.

If you’re coming into this from the old version of VII, nope, you can’t transfer that old save data or DLC content at all. I’d gather the number of changes being what they are plus a few other factors prevented this, but it ends up a great excuse to replay the game as this updated version just to see the new content and experience those cleaner visuals. If you’re coming into this as a new player, it’s a game packed to the gills with fan service galore with an oddball tribute to game companies, game consoles and game history that may go way over the heads of some. Part JRPG, part visual novel, and good for a few to plenty of laughs when you settle in and let the kooky humor do its thing.

This time out, two of the sister Gameinsdustri CPUs, Goddess Neptune and CPU Candidate Nepgear, get pulled into a new game world thanks to a damaged console Neptune finds. The pair meet up with a new CPU, Uzume Tennouboshi as she prepared for another battle against a massive mecha boss that’s clearly too much to tackle. The action and story move to a few other locations as the other Gameindustri Goddesses and CPU Candidates get pulled into the events, so you get to have Blanc, Noir, Vert, Uni, Rom, Ram and a few other gals as party members.  If you’re new to all this and your head is spinning, fear not. The information-packed Histoire is your key to getting a handle on things via her very helpful tutorials.

The turn-based combat has been altered to slow down the pace and add a bit more tactical depth to battles. Both skills and item use are now based on a character’s total Action Points (AP). At the start, you only have a measly 4 points per character to use, but this increases as the game goes on and tougher foes arrive on the scene. The only gripe about the combat I had was quite often trying to run up to or sneak towards enemies with intent to get in a surprise attack led to some of the faster moving baddies getting in that early strike first. This wouldn’t be so bad if you knew how many enemies appeared in a group, but expect a few “Holy Crap!” moments when you get jumped and it turns out to be a pack of cranky beasts that all get in attacks before you can even breathe.

The game auto saves after each battle and whenever you go to your in-game room for a VR sequence, so prepare for an RPG with a single save file and no opportunities to exploit replaying older saves. On the other hand, it’s really great to not get caught up in playing, forget to save and pay the price a few hours later if your party is wiped out and a few hours have passed. Both English and Japanese voice options are here, so feel free to choose between the two. Both are solid, as is the humor that ranges from Neptastic to slightly racy (but not overtly exploitative). That said, you kind of wonder if that T rating means “Tease” and not “Teen” because it seems the game hasn’t been altered at all in terms of its visual content. I guess you can say this game is Rated S for “Sassy!” (a little Working Designs humor, anyone?)

The less “Sassy!” VR sequences are tame talky fluff and feature the main Goddesses and CPU Candidates popping into the Player’s room to get chatty about your hobbies and their own interests. That room can be decorated with furniture and accessories you’ll acquire as the game progresses and yes, those Goddesses will react to your decorating skills. The girls’ personalities come through even more so than in the main game because of the one-to-one nature of their conversations. With the VR enabled, you can look around the room as the girls poke at your games and comment on assorted things. Without it, using the controller is a decent substitute, but you’ll need to be careful when choosing a Yes or No response, as it’s possible to accidentally select a response when trying to adjust the camera. The gals will also give you a little grief if you’re staring at them for too long or looking where you shouldn’t, but hey, whatever floats your boat, Popeye.

Par for the course, there’s a digital ton of content here to mess with both in and outside the main game story. Colosseum battles for fun and profit, Rank Challenges (online or offline), Disc Dev crafting and a whole lot more. I’m still playing though this (about 62 hours in, but close enough to the endgame that I stopped to knock out this review), but it’s definitely worth a buy or rent even if you’ve played the 2016 game.  Granted, some of you may not want to double dip because this year is so packed with new games. But this is a case where if you liked the original, it may be worth your while to experience this enhanced version. Actually, I need to wrap this one up soon and get started on Cyberdimension Neptunia: 4 Goddesses Online, which I nabbed on sale last week, spent about an hour with and sure looks as if it’ll be the best-looking Neptunia game to date.