Kemco and veteran developer Exe-Create have had a particular formula with their mobile games where they cook up simple, nostalgic stories with casts of the usual JRPG suspects, sticking them in games that reuse some assets and range from OK to pretty darn good. You’ll also get a relatively straightforward game on the surface that’s actually hiding a ton of optional content for those willing to grind up hundreds of levels and gain some incredibly powerful skills.

Initially released on mobile back in 2014 and ported to PS3/PS4 and Vita back in May (and now on Switch) Revenant Saga does a pretty fine job of recapturing some of the glory days of the 16-bit era while adding a few modern twists that reflect the game’s mobile origins. While its mix of nicely done sprite art clashes with the polygonal battle scenes, the game works well overall in delivering a decently nostalgic experience. Granted, you’ll really need to work to get to some of the more challenging content. But if grinding appeals to you, there’s a lot to love here.

In the game, you’re Albert, a young man who volunteers for an experimental process that is supposed to help cure a plague that’s run rampant. Unfortunately, the mad doctor passing for helpful doing the treatment turns out to be using humans as hosts for Revenants, powerful demons that are part of a few plans (some of which the not so good doctor is totally unaware of).

Even though Albert dies from the treatment (not a spoiler, as it happens really early in the game), he’s resurrected with a demon inside him and a dark hunger for demon flesh he refuses to satisfy.  Soon, Albert meets up with Esther, a young girl who desires nothing more than to be a Valkyrie for the church out to eliminate the Revenant threat. Naturally, Albert can’t reveal his true nature to his new companion. They’re soon joined by Bruno, a rather pious demon slayer with a dark secret, and Julia, a young girl they rescue from harm with a darker secret or two of her own. Yes, this is a game where secrets come into play quite a lot.

In fact, a good deal of the fun is watching the party members play off each other as the story progresses and the main enemies do the same to their less tentative allies. There’s also a religious element to the story that’s a nice surprise because it involves Albert questioning the fierce belief in a deity that seems to not be doing much to aid suffering people no matter how hard they worship it or fight off the Revenant threat. I’m old enough to remember when JRPGs localized here dumped that sort of stuff or altered it significantly for American audiences, so it’s pretty interesting to see a game embrace it and not pull many punches. 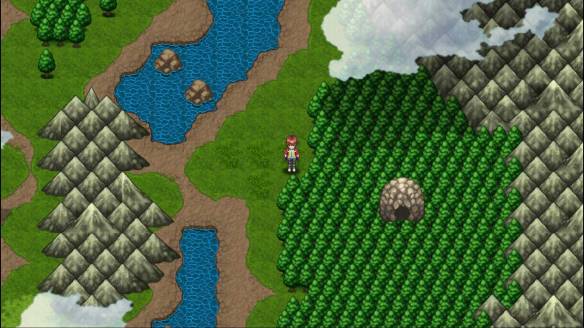 Gameplay-wise, you get the usual random battles you’d expect from a JRPG with the added ability to make the game dole out even more battles using an optional item you can buy that kicks off combat with every step you take. While you won’t need that at all early on, it comes in really handy if you decide to tackle the game’s optional content outside the main quest and numerous side quests. As noted, the overworld and dungeons are presented in clean, sharp 2D sprites while combat is done with somewhat not as pretty 3D art that resembles early Dreamcast/PS2 era stuff. As long as you’re not expecting top-quality animation here, it’s serviceable at best. However, given Exe-Create’s other all-2D work on mobile that’s been ported to consoles, it feels less “nostalgic” and more like a step sideways.

At least the game gives you the option to skip battles if your levels are higher than your enemies and you can also omit battle effects to speed things up even more. I personally tended to watch the different attacks and spells a few times before switching to speedier play, although I also tended to want to see the different spells in action. One caveat to automatic combat is you can get into trouble fast later on when you run into enemies impervious to normal attacks. You can choose to set up tactics for each party member if you like, but this only really comes in handy if you’re fighting a tough foe resistant to certain attacks or spells. There are a few monster types common to Exe-Create’s other games, so expect some challenging variants to the menagerie of creatures you’ll face off against.

Par for the course in an Exe-Create game, the main story really doesn’t take all that long to complete and you can get to the end boss within about 20 hours or so of play. However, once he’s beaten, you get the chance to save your file and go for the game’s true ending as well as unlock content you won’t see if you simply blow through the game for the story alone. That weapon crafting you’ve been doing becomes really important as does figuring out which skills to excel in thanks to a tough battle arena run by a mysterious Maidame Curie where you can fight a seemingly endless supply of monsters popping out of a crate for fun and something called the Kabillion Challenge where you need to try and deal as much damage as possible to Curie in 20 turns. These are not at all easy tasks, by the way.

That weapon crafting is kind of genius in a way as it more or less adds a Diablo-style loot drop/item crafting/enhancing element to the random stuff you’ll receive. Equipping rings that increase drop rarity is a must, as is sailing to some of the unnamed islands that feature tougher monsters than the final boss on the hardest level (yipes!). There’s a level cap of 999 (this is where that one-battle per step ring and some other gear come in really handy) and even then, you’ll still need to play smart to get through that EX crate challenge. It’s also an area where the tougher enemies will wipe your party out if you try and auto-battle your way through.

While the game is a fine and fun time indeed, it’s got a few goofball issues. For starters (and like a few of Kemco’s other console ports), there’s no Cross Save functionality even though it’s an inexpensive Cross Buy game for PS3/PS4 and Vita. Yes, if you’ve a PS Plus account, Trophies are saved as you earn them and uploaded to the cloud (cue angelic-sounding ringtone effect). But you can’t save game progress and restore it across consoles, which is a shame and kind of annoying if you want start on the PS4 and want to continue on the Vita. Load times are a bit lengthy on the portable and PS3 versions, but that’s not any sort of deal-breaker here. The final quirk some will discover is the game’s resolution is fixed on certain widescreen TV so about an inch of top and bottom of the screen is cut off. But this seems to be a matter of what type of TV one has and isn’t the fault of whomever did the port. My current TV won’t let me scale down and even using the PS4’s system settings was no good. The game was still playable and anything stat-related I needed to see was available, so it’s not a big deal.

So, long story short: Revenant Saga is a pretty solid game when all is said and done. It’s worth a buy if you like your JRPG’s old school and can put up with those chunky-looking combat scenes. Kemco’s done a few other mobile to PlayStation family ports I’ll get to in the near future (Asdivine Hearts, Antiquia Lost), as well as a few Nintendo 3DS ports I’ll also cover at some point. Well, as long as the planet doesn’t blow itself up first or I start trying to watch the news again without wanting to remove my eyeballs and brain with a melon baller. Thank goodness for every little escape from reality, I guess.