Warning: This review may be full of rock puns or something. Or not, as I’m writing this on the fly between campaign missions. Rock of Ages II: Bigger & Boulder is a must buy right out of the game if you love your games surreal, physics-based and packed with artistic genius that might roll over the heads of some gamers who won’t “get” the all-out insanity here at all. Granted, developer ACE Team has always gone out of its way to lace their games with stylistic influences that are far from the norm when it comes to pegging them with a particular style. But here, you get the kind of mind-bending overkill that’s constantly making you smile or burst out laughing because pulling off humor so well in a game like this makes it a total blast.

There’s a single player mode as well as co-op and online play for up to four. But at heart this is a spin on a few genres from racing to tower defense, to bowling with a dash of puzzle elements thrown in for good measure than can be fully enjoyed solo. Imagine if Rampart, Super Monkey Ball, and Marble Madness had a child raised on a steady diet of Monty Python animation while reading art history books for fun and you’re about a tenth of the way into what’s going on here. The game is also quite challenging and definitely not a cakewalk on the more difficult settings. That said, prepare to let the good times roll as you rock on with Atlas as he engages in rolling combat with assorted foes in not at all historically accurate settings. 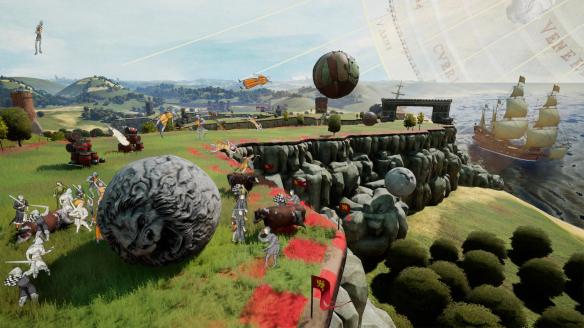 If you’ve never played the first game on PC or PS3, fear not, friends. This game is as the title says, Bigger & Boulder overall. Basically, you simply need to bash through the enemy’s gates as they try to bash through yours with fast planning between rolls required to lay traps and do your best to protect your rock from getting wrecked/ Experimentation is going to be your big key to success as learning which of the many unlockable defenses will work best against the enemy’s boulders. That and the customization options that unlock keep things really amusing when as you defeat assorted historical and mythological figures. 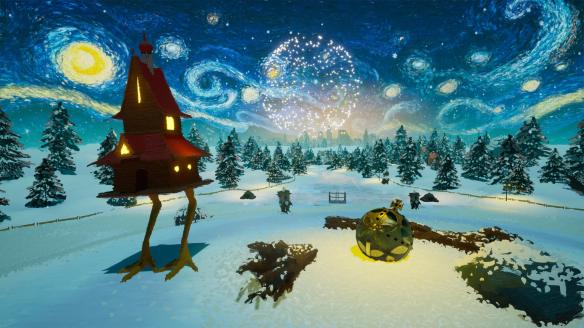 The assorted courses get more and more complex, varying wildly in artistic style but always mixing it up with surreal imagery and wacky humor. If you ever wanted to roll through a stunning version of Van Gogh’s Starry Night, have a bit of a Scream with that famous work or hell, just wreak havoc in the Garden of Eden, this is the game for you. Then again, even if you don’t have a sense of humor or art appreciation, you should still grab this for the crazy amount of Unreal Engine 4 and Nvidia PhysX destruction you can cause with a bit of practice. A minor drawback is the levels blaze by so darn quickly that it’s hard to see every bit of detail ACE has put in. But hey, that’s what “replay value” means and yes, this is a game worth replaying whether you’re besting your best Time Trial times or want to try out new tactics using unlocked gear. 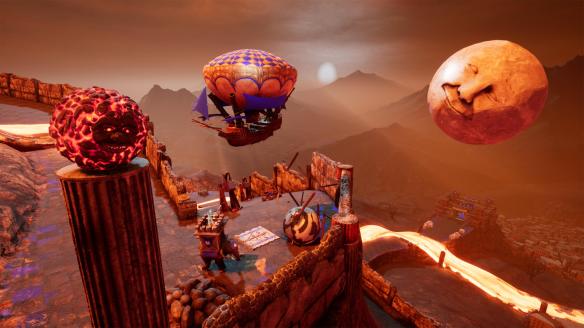 While you can indeed best the AI by replaying levels and mastering them, the co-op and online modes are well worth checking out if you like your opponents more lively and less predictable. I’m not much a a reliable online gamer these days, but the game thankfully allows for split-screen play for two in a few fun competitive modes. This is just the sort of crazy game you’ll want to pop on and introduce to a non-gamer or someone who might not think they’ll like it because between the total absurdity and the sheer thrill of rolling a boulder around makes them not want to stop playing. 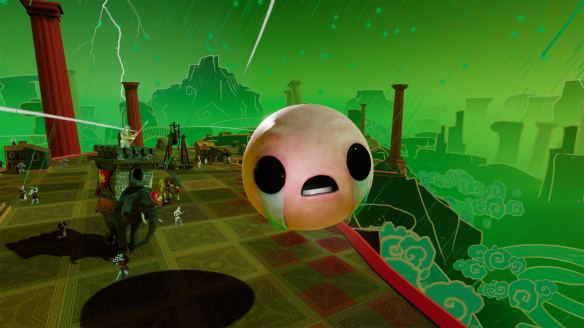 There’s a ton of game here (and yep, there’s The Binding of Issac DLC available for free for the first month of the game’s launch) and despite the seemingly simplistic premise, it’s a game that’s always hilarious and hard to put down. At a measly $14.99 (or $19.99 bundled with DLC and the original game as bonuses), this is one slice of nuttiness that just might stay in your library for a while.You could even say you’ll be rolling in the aisles, but you’d need to be able to bust out those Horatio Caine sunglasses and duck some tossed tomatoes aimed at your forehead. Better tomatoes than boulders, though.

Hey, we all need to roll a big-ass rock at something in life once in a while and this mix and mash-up is probably a perfect stress reliever. Get this. Oh, and yeah, less puns than I thought this time, but considering I was originally planning to rewrite the lyrics to Def Leppard’s classic for this review, you’re all probably better off not reading that at the end of the day. Hey, I don’t want tomatoes or boulders tossed at my head either.