Yeah, yeah. Run ‘n Gun games are RAMPANT on Steam these days, but exactly how many have you playing as a tea-sipping dog in a smoking jacket named Baron von Dogface? One. SOLD! Well, in Retro Dreamer’s spectacular Monsters & Monocles, you can also play as the sharp-dressed Lady Cannonhail, mustachioed Rupert Killingsworth, or the monocle and top hat-sporting Monobot, all solid cartoony killing machines worth taking through this tough twin-sticker.

Snazzy pixel art, bouncy animation and some great tunes drive the action here, and this isn’t a cakewalk you can one-hand through with a cucumber sandwich with the crust cut off in the other. In fact, the tough difficulty makes this a great game to solo and even better with like-minded friends. Local and online co-op keep thinngs rolling along, so if you’re having trouble with a boss or some of the monster packed rooms here, just recruit a pal (well, after you extol the virtues of this gem and they buy it, of course). Fans of the Alien Shooter games and the oldie but goodie toughie Soldiers of Fortune (or The Chaos Engine, for those of you who prefer the better original name) shoul eat this one up, as it packs in the non-stop action while being quite rewarding like a great arcade run ‘n gun should. 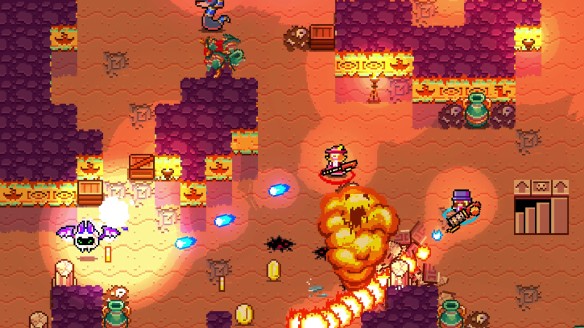 There’s a story here, but it’s pretty much an excellent excuse to go shoot up all sorts of hideously cute, not so cute and always quite deadly as all get-out monsters, which is just fine and dandy. Okay, if you NEED exposition for your extermination purposes, here you go:

A naive occult collector has unknowingly unleashed a great evil that is spreading across the globe, and it’s up to you and a team of quirky paranormal investigators to find the source of this dark energy and blast it back to where it came from.

Happy? GOOD. Now, go grab a controller (if you want to feel as if you’re playing a great 16-bit game) or keyboard and mouse (because you’re stubborn like that – both work great!), pick a hero and get to the running and gunning. There’s a hub area (the team’s dirigible) to poke around in with a map that has three areas you can hop into in any order, with three more areas that unlock after completing the previous maps. While gameplay is indeed simple, the enemy counts are no joke. Assorted minions and mini-bosses pack tiny to large rooms and these pests are all fierce and once alerted, come at you until destroyed. The game’s roster of baddies features teleporting ghosts, a few creatures that spit out smaller versions of themselves, bum-rushing types, a few ranged and annoying beats and more.

There’s a nice Diablo meets Nuclear Throne (or other solid twin stick shooter) thing going on here that makes each room a heavy chunk of challenge. Weapon pickups are random (smash EVERYTHING you can!) and you’ll want to try everything out to see what suits your play style. Unlimited ammo aside, you can’t just hold the fire button down and zip through the game. The better guns all have cooldown periods that leave you open to attack, meaning there’s a balance of timing it right and switching weapons for best results. Power-ups boost certain gear, armor drops help you live longer and other pickups keep the fun going as long as you can survive. Three lives are what you get, but you can extend this if you’re carefully scouring maps and not getting chomped on too much. Dying bounces you out to the lobby, but any relics you’ve found can be re-equipped and yep, you’re back to it before you know.

One interesting thing here is (at least in the current version) maps you’ve cleared to the point you’ve unlocked the exit will have those exits opened, but will also be repopulated. This means you can simply hoof it to the exit (Ha!) or fight your way around, picking up weapons and upgrades. Sadly, you can only pack two types oh heat here. Buy the weapons are all great and have differing strengths and weaknesses. Stake guns, blunderbusses, A few types of multi-shot guns and even good old revolvers are all here to try out, and yes, ALL are worth using to ventilate those wee and not so wee beasties. Those bosses in the game faced so far follow the old school rules of big and annoying, stuck in a room where you have little room for error, and yeah, minion generating for added pain and suffering.

Co-op and online play for up to four are equally great and welcome, so it’s perfect for playing on the couch with the kids or online pals. As the game is being updated, the possibilities for more maps, characters, weapons and more are all here. That’s pretty much all to say about this one other than it’s very likely going to stay in your library for a god long time once you grab it. Oh, and yes, yes… this NEEDS a console release so more folks can play it. I’d certainly buy it at full price twice and gift those codes to friends I want to play with who can’t pop over, popovers or not.

Review copy courtesy of the publisher.