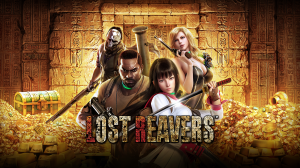 While it hasn’t sold in the numbers Nintendo has liked to have seen, the Wii U isn’t dead just yet. Bandai Namco’s online-only action shooter/RPG-lite exclusive Lost Reavers popped up last Friday as a public beta until April 26 (the final version goes live a day later) and after some extensive playtime, the jury is in on the gameplay (solid and accessible fun), but out on the lack of certain features that make these online games hugely popular and more enjoyable to western audiences. Let’s start with what works before commencing with the constructive criticism, as some things can and should be ironed out once the final release is out.

While the “plot” is thinner than a sheet of rice paper on a recently paved road run over by a dozen brand new steamrollers, it’s not *why* you’ll be playing at all. The game is a throwback to a simpler arcade style of play: Run through maps killing monsters and picking up drops before making to a relic room where that prize is retrieved by a single player and carried to an exit warp while the others protect hm or her. Most maps are relatively short and can be completed in less than five minutes to closer to ten minutes each with a good set of teammates. The Unreal-powered visuals are okay and occasional lag and bug issues (that will hopefully be squashed before launch) aside, the game runs at what looks like 30fps most of the time. While it’s a third-person game, each of the four classes plays differently and the heavy gunner guy has the only optional first-person view. My own preferences are the third person furthest view camera because it allows for seeing more of what’s around you, but there’s also a second third-person view that adds a targeting cursor as well as a lock-on function that should help casual players get used to things quickly.

There’s a brief tutorial that takes about ten minutes or less to complete, but prepare to do it again if or when you switch characters. Initially, the game’s run & gun meets hack & slash simplicity makes the early maps fly by with relative ease. But as you gain experience, things get significantly more challenging. At levels 5, 10, and 15, you unlock bonuses and new menu options such as the ability to gamble Analysis Chips for rare weapons or opening up an upgrade feature for gear you’ve equipped or want to equip later. Skills can (an SHOULD) be upgraded as those not too tough enemies get harder and eventually your character’s basic under-leveled attacks become a lot less effective. Speaking of, that first boss that opens up at Level 15 is no joke and in fact, CAN’T be fought for at least five levels more. I found this out the hard way with a full party of would be boss stompers and after being sorely bested and shown who’s the boss, it was back to the drawing board. 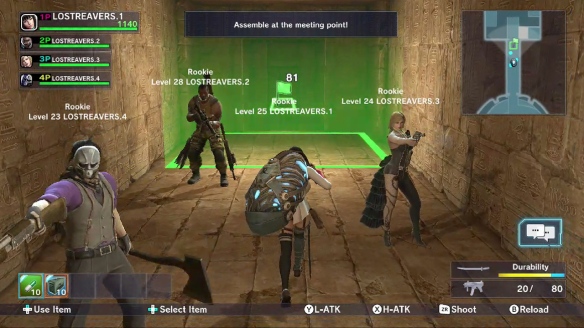 One of the big issues with the game is the rather basic chat system that’s made up of dirt simple commands such as “Wait for me.”, “Yes.”, “No.”, “Let’s go again.” and other plain and too efficient phrases. Nintendo doesn’t want live chat in its games as a means of keeping the cussy cusses from constantly cussing on their family-friendly console. But the trade off is lousy communication and no means to block or ban lousy and/or disruptive players from a match other than disbanding the room or hoping the creep(s) leave on their own at some point. This is unacceptable, but it seems that Japanese gamers playing the game since last December have been making do with those dirt simple chat commands just fine. It’s not a total stereotype to say gamers there are generally more patient and helpful to new players while the “hurry up!” western style of play where people are either TOO talkative or don’t communicate at all rule the roost. 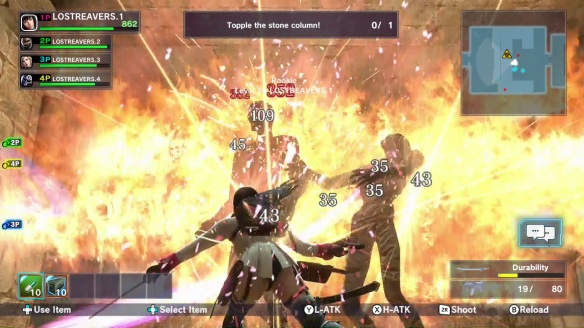 A happier medium would be allowing players to tailor their own chat menus from a list of cleared words and a filter that blocks saucy content from being broadcast to fellow players. Additionally, letting new players now that they need to carry and dispense spare ammo and healing elixirs when necessary would help stop a lot of digital deaths from occurring. As there’s no offline mode (although you’re classified as such when you log in), it’s hard to practice solo for experience and relic collection bonuses even if you set your room to solo play. A solution would be allowing players to “lock” rooms and play at their leisure without people dropping in to pestering about “change the mission” or anything else you don’t want to do because that room was supposed to be PRIVATE.

Another issue is the GamePad-only controls. While the game uses the pad for chat purposes, allowing two players to play some sort of co-op game offline with one using the GamePad and the other a Classic controller would be nice. Granted, only one player would have easy access to chat functions when online. But at home or at a friend’s place, you’re not going to hit up that chat function at all with Player Two an elbow in the ribs away. That’s a big job to tackle, but I’m hoping Bandai Namco at least tries it out and lets players chime in on the results in a future beta test that features a number of player-requested updates from more characters to some sort of level edit feature. 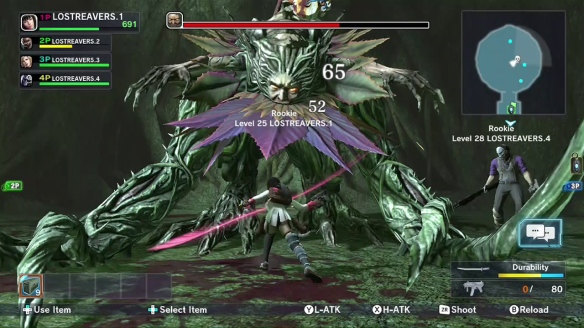 The final game will be “Free to Start” with to be announced micro-transactions available at launch. The Japanese version charges for weapon upgrade chips and other content, but in the beta, ammo is free and there are items and useful Tools that can be bought with medals earned during missions. Those tools (a master key, hacking terminal, power glove, and repair kit) all come in VERY handy during play, by the way. That said, this is a game where both reading the digital manual and practicing alone along with diving into missions with veteran players ends up being the best ways to learn the ropes. Japan is getting expansion content soon that should make it out over here and in Europe at some point if the game is successful. As it is, warts and all, Bandai Namco has a sleeper hit on their hands that needs a few additions so it can be an even better game than it already is.