It I could name my trucks here, I might go with Tonka, Tootsie, and Dinky…

I’d been sleeping on these assorted Simulator games for a while because they take quite a while to play, but thanks to a friend asking about them (he’s getting his kid a Switch and happens to be in the construction field). I finally took the plunge and can report that yes, hours will go by with a well-done sim like this. Astragon’s got a solid game in Construction Simulator 2 on Switch ($19.99), and while it’s a highly complex game that requires quite a bit of precision and patience to play, parents into this sort of game might find it educational if their kid is say, about 12 and wants to get into the business at some point in the future.

That said, the game is pretty daunting even for adults even though it has a wealth of tutorials and tips to get players up and starting a little (and soon to be rather large) construction business. You’ll need to constantly make sure whatever equipment you buy or rent is in the PRECISE position when operating on a job or errors will be made and learning where and the game covers so much ground (ha-ha) that you’ll be working up a real sweat from the level of difficulty as you learn a lot in the process. The game is no joke when it comes to the simulation elements, especially with all the settings up.

You better know how to use that, pal…

Driving most anything in your growing fleet is also a bit perilous, as everything from minor wrecks to a few pileups when bad drivers cross your path can cause your funds to take a financial hit even if you’re the most careful driver. I turned the traffic penalties off in the options after a car hit the bus in front of me and caused some damage I had to pay for thanks to the truck I was driving needing too much room to brake successfully (oops). While there’s a fast travel option, I’m a cheapskate and rather liked learning the roads to and from jobs a lot. Well, that and I found the driving to jobs somewhat relaxing with those penalties shut off. You can also turn traffic off completely if you prefer the thrill of the open traffic-less road over the surprise of a crappy driver messing up your zen-like drive to a job.

As your business grows, more and varied tough jobs will become available, but you can also go back to older tasks and use those to earn a few bucks. The game leaves this up to you to either follow the story path or retry jobs until you can do them with one eye closed. Navigating the assorted control schemes can be a bit overwhelming at first, but that’s where that patience mentioned earlier comes into play. Your guide, Pete, comes in handy for explaining some things, but the game has optional arcade-like controls in addition to more realistic ISO and European ESO controls. The game is pretty customizable on a few fronts, but you can play it with the default options and not touch a single slider if you like.

Visually, the game is pretty solid on Switch, with nicely detailed licensed trucks and structures overall. You might see some odd shadows, a bit of pop-in and some resolution artifacts in either handheld or docked mode, but the level of  immersion is pretty decent other than people vanishing from the streets on occasion (vehicles also tend to pop in and out when they wreck after a few seconds). Sounds are good as well and while generic garden variety elevator rock and sort of easy listening tunes are aboard, they get the job done (and yes, you can turn the music off if you like). My largest complaint here would be the game clock moves too quickly. You can adjust the time in which you make money, but that’s it. Until you master the assorted commands, DAYS will fly by on some simple tasks as if the world’s slowest contractor is working on them. 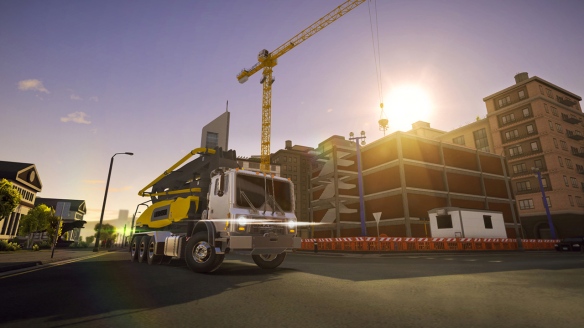 Is it earthquake-proof? I don’t know, but it took me a few hours of work to work on and I got PAID, man.

In terms of time spent, well, expect this one to take some time to complete. I put about 16 or so into this and wasn’t done, but I got a nice way in so far. The game has over 60 missions (I got 49 done) before I sat down to write this. Your mileage will vary based on your own play style and if you just blaze through this one in a few sittings. I found it addictive and tough to put down once I got a few trucks in my company and concentrated on learning how to get them to do what I wanted them to. Money was not too much of an issue once there was no traffic and I spaced out my finances carefully as things grew. But I also learned that carelessness with finances can get too risky if you start a new profile and just get crazy with loans and spending like a drunken sailor with a construction company as an experiment.

At the end of the day, while more of a pure hardcore simulation that’s not for those who dislike reading and some truly demanding precision in operating its various vehicles, I’d recommend Construction Simulator 2 because it’s a pretty complex game where learning is hard, but you also feel quite the sense of accomplishment when you nail things down (and dig things) up as you should. It’s a wee bit much for very young kids, but with a parent along for the ride to help things out, I can see this one for older kids and/or those with a willingness to learn and a lot of patience and practice. 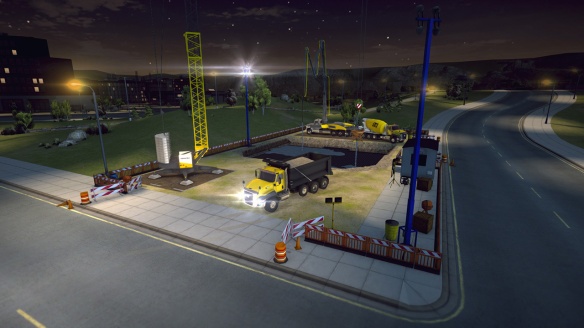 No, Jimmy Hoffa is not in that hole. I think… Look, I just fill the hole, that’s all I’m paid for!