Night Trap tells the story of five teenage girls spending the weekend at the Martin home. As a member of the Special Control Attack Team, your job is to monitor the home and protect the girls using an intricate system of cameras and traps as it is being invaded by vampires.

I am laughing my fool head off writing this, but hey – a happy me is a good thing these days. Screaming Villains, based out of Newport Kentucky, is teaming up with Limited Run Games to bring the classic and at the time of its release 25 years ago, “controversial” Sega CD FMV (Full Motion Video) game Night Trap back as a remastered PS4 and Xbox One title. I’ll be a lazy git and let you read the Wikipedia page so you can see what the fuss was all about, but what was considered an MA-13 (or Mature) rated game back in 1992 is now a Teen-rated experience with not a thing altered. Digital Pictures created what was supposed to be (and is) a campy take on the horror genre, but for years the game has had a hilariously overblown reputation thanks to it being pulled from stores in some areas. 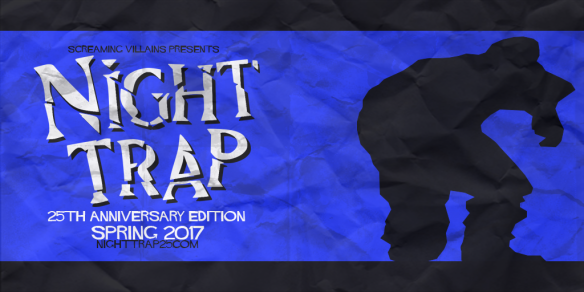 My own memories of it are the game being quite amusing but pretty difficult without a guide of some sort and not at all scary or bloody. The plot has you trying to save a bunch of cute 90’s gals at a slumber party from oddly dressed vampire creeps by setting traps inside the house and activating them before the girls are attacked. It’s all pretty corny, harmless “B” movie fluff that might surprise modern gamers when they see how goofy it all is. As in all that government fuss and bother did was make a so-so game a classic of sorts that still gets people talking. Amusingly enough, the game is about as scary as an empty plastic bottle on a windowsill.

For some reason, during the 90’s and into the early 2000’s a handful of gamers thought the 3DO and PC versions had bits of nudity or actual gore in them despite the fact that no such footage was shot. Coupled with the game’s rarity once pulled from shelves, helped drive prices up considerably. Working in an indie game shop for about five years, I fielded more than a few questions and kicked down as many of those rumors as I could, but you know how some people get when they really believe something that’s clearly untrue. Anyway, go download the super-cheeseball main theme and set your digital clocks for sometime soon, as the game is set for a mysterious “Spring 2017” release.