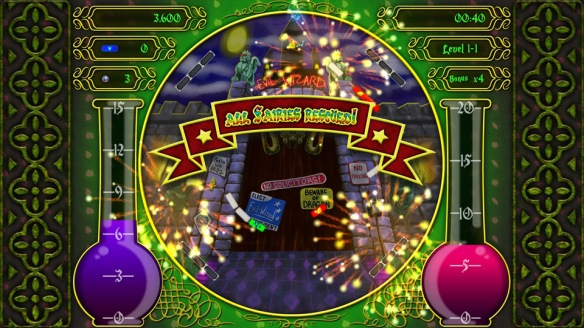 Black Shell Media has been publishing a slew of fun indie games for a while (over 60 titles to date) and as I whittle away at my backlog, I’m finally getting around to playing a bunch of them. Magical Brickout won the coin toss and as a fan of Breakout or Arkanoid-style games, this Early Access game had me at the first ricochet. Indie developer Cunning Force Games has whipped up a fun mix of puzzle and RPG-light gameplay that’s addictive and challenging with a circular play field that may remind a few of the well-aged gamers out there a tiny bit of Star Castle played from the perspective of that game’s titular nemesis.

There’s a basic plot about an evil wizard trapping fairies in magical bricks and using their powers to keep his castle safe while his kingdom domination plans, but you’d like to know how it plays, I’d bet. Pretty darn good, I say. The rotating play field takes a bit of getting used to, but the replayable tutorial does an excellent job of setting up the game and letting you ease into the controls. Using the A and D keys to rotate the play field and SPACE to launch balls (or the right analog stick and X on an Xbox 360 pad), you’re tasked with freeing all the fairies on each board while avoiding bad status bricks and using assorted power-ups to aid in your progress.

From what I’ve played so far, complaints are minimal. Sure, mouse control would be a nice addition to the game because some levels get REALLY hectic. But I think  the rotation speed of the board is set to be intentionally methodical for say, billiards and pinball fans looking to line up shots before launching. That and heck, there’s something to be said for LEARNING how to play a game and not expecting it to play EXACTLY like something familiar, right? Yes, the art direction could be described as “hidden object game rustic” (a friend who popped by noted that with a chuckle), but it’s all good that this game rocks that hand-painted style without apologies.

Updates are hitting this one fast and furiously, so there’s a great deal of content to explore that makes the price point more than a reasonable bargain. Even better, there’s also a big sale on Black Shell’s catalog on Steam even as we speak, so I say click on over and buy a few things to add to your library or gift to friends who need more variety in their own collections. Add some Magical Brickout to your life as well – you look like you need to spin this spinner of a game for a spin anyway.