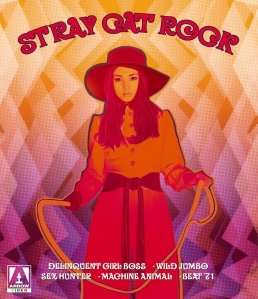 As a slice of Japanese cinema of the early 1970’s, the five films that make up Arrow Video’s Stray Cat Rock Collection make for quite a quintuplet of quickly made flicks influenced by American biker films of the previous decade. Directed by Yasuharu Hasebe and Toshiya Fujita, the films feature the same cast members but are actually mostly unrelated other than in their thematic elements.

“Youth gone wild!” and “Crime Doesn’t Pay!” seem to be the orders of the day here as the series was created by Nikkatsu to compete with rival Toei’s popular Delinquent Boss films. So there’s male and female gangs, exploitative violence, not as much sex or nudity as you’d think (but it’s certainly there), a bit of slapstick, a random concert and more. While there’s plenty of seedy and salacious content, some of the trailers included advertise the films partially as comedies, which is amusing in and of itself. In other words, some viewers will need to approach this set with a wide open mind because what constitutes “comedy” here might seem a bit humorless or just plain strange outside of its home country. This is a good thing at the end of the day as expanding one’s cinematic horizons is a core reason to watch films you’ve never seen previously.

The overall tone of the films will probably seem scattershot to some viewers used to movies that stick to a certain predictable style from start to finish. For all the raging delinquency, drug use, wild dancing, sex and violence on display there’s also a lot of karmic retribution and negative actions leading to more and worse reactions for some characters. This makes the collection a really intriguing set of films that, warts and all make for some pretty cool “B” movie bliss. As usual, some excellent transfers and nice bonus material round out this Arrow Video release and make it a must for collectors.

Opening with Hasebe’s 1970 Delinquent Girl Boss, this first entry is a nicely done tale of girl gangs going at each other with a mix of gleeful abandon and gloomy inevitability. Akiko Wada and Meiko Kaji star as two delinquent gals whose paths cross after Wada’s character gives an assist to Kaji’s gang (The Stray Cats) during a crucial moment. Loads of stylish camerawork (the opening sequence is fantastic stuff), double-crosses and a lengthy dune buggy/motorcycle chase are highlights here. While the violence is pretty tame by today’s standards, a gal getting tortured by a rival gang might get a few weaker stomachs churning for as long as that sequence lasts. Despite the sometimes downbeat elements here, the film has a more or less “hopeful” finale that doesn’t pretend to be a happy ending.

Fujita’s Wild Jumbo is up next and while the cast is the same, everyone is playing a different role and the plot is completely different. This one’s about a small group of wild guys and gals, one of whom (Soichiro Maeno) is madly obsessed with weapons to a fault. This motley crew of happy-go-lucky mugs end up trying to stage a robbery after a woman they encounter lets it be known that the organization she’s part of has money to burn. The gun-obsession on display is pretty over the top with Maeno cuddling up to his precious as if Japan adopted the Second Amendment with even more fervor than some have done here. Of course, finding a stash of old weapons from WWII means things aren’t going to get any less wild for the crew. the pacing here is more languid in spots, but Fujita lays on the style when he wants to make a point.

Despite the saucy title that promises loads of nudity and post-hippie free lovin’, 1970’s Sex Hunter is probably the strongest in terms of story and content. Tackling race relations, more gang-related vengeance and even the search for a missing relative, what’s here is the hands-down best of the five movies. Granted, even though The Stray Cats are back (with Kaji in a totally different role) you’ll have to deal with a racist gang called The Eagles and their evil ways of dealing with people they consider “half-breeds”. The film’s overall tone is darker than the previous entries and returning director Hasebe really knew how to get both his camera and his actors doing exactly what he wanted them to. Sex Hunter has gotten a previous DVD release from another company (probably due to that title and what some expected when they saw it available for sale and threw their money at a copy), but the film looks far better here.

Also made in 1970, the fourth film, Hasebe’s Machine Animal is the story of two guys trying to get a Japanese-American buddy out of the country so he doesn’t have to serve in Vietnam by selling off a cache of drugs in order to afford the boat fare to Sweden. Naturally, things don’t go as planned thanks to a few things like rival gangs wanting those drugs and the results of that getting in the way of things. Meiko Kaji is back again as the leader of a female-only gang and yes, she’s the main reason for watching. As this was the third film in the series directed by Hasebe in under a year, there’s a bit of sameness to some parts that’s probably the director merely sticking to formula out of convenience. While it’s better than Delinquent Girl Boss , it’s also clear that the series was running low on steam.

Fujita’s work on the final film, 1971’s Beat ’71 is decent enough, but the film’s mix of psychedelic school bus antics, a kind of lame plot that’s compelling if you don’t take it too seriously and the usual mix of angry antics already seen in previous entries mean it’s a less interesting film than what came beforehand. Still, for its faults the film has some of that restless energy the series kicked off with working in its favor. Like the other four flicks it clocks in at about an hour and a half and doesn’t wear out its welcome unless you’ve somehow decided to sit through all of the movies in a single sitting. On its own, it feels like a better film. But the vibe seems to have run out on this sort of movie in Japan or at least some genre tastes were evolving into even darker and more exploitative content as Nikkatsu’s output soon showed.

All of the movies look great with digital transfers that aren’t overproduced and show off all those camera tricks and some amazing to downright gritty and grimy Japanese locations. While not intended to be any sort of travelogue, seeing Tokyo and other locations in a raw guerrilla-shot form was somewhat thrilling. These films were shot quickly and some simultaneously, so you’ll be going all over 1970’s Japan at the small cost of $69.95 (or less if you shop around). Extras include trailers for 4 of the 5 films and three interviews (director Hasebe, stars Tatsuya Fuji and Yoshio Harada).

It would have been nice to see and hear more about Nikkatsu Studios here, but that subject was previously covered on Arrow’s releases of Massacre Gun and Retaliation. Which means you’ll need both of those Blu-Rays in your collection and soon. As usual, Arrow scores a hit with another fine set of films you’ll want to check out or even grab as a gift set for a movie lover who likes to walk on the wild side.