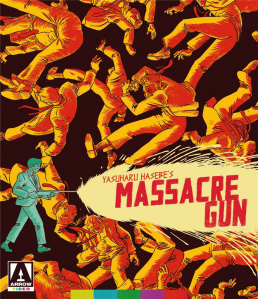 Yasuharu Hasebe’s brooding but action-packed Massacre Gun (Minagoroshi no kenjū) is a great example of the Japanese gangster film that’s well worth a look. Starring chipmunk-cheeked Jô Shishido (he has plastic surgery to look that way), the film packs in plenty of beatings and shootings into its 91 minute running time while maintaining its not so sunny outlook for just out everyone in its cast. Then again, when the “happiest” looking guy in the movie is the angry one with the titular firearm you know you’re in for a wild ride.

Shishodo stars as Kuroda, a hit man who turns on his employers after being sent on a job to kill his girlfriend. Kuroda fires himself after the work and teaming up with his brothers Saburo (Jirô Okazaki)and Eiji (“Tatsuya Fuji”, or director Hasebe’s acting persona) also wronged by the crime boss, set off to take down his empire. This trio of men setting out for vengeance on other men thing is a high risk gig and yes, the film has a very fatalistic tone running throughout that works heavily in its favor. Some Japanese gangster films tend to have running themes about codes of honor and men maimed or dying in as respectful a manner possible (well, given the violent ways in which they meet their ends). There’s a lot of that in Massacre Gun, but Hasebe’s fluid, innovative direction and use of a jazzy score make the film compelling even in its most violent moments. That and the film is amusing when it needs to be. Someone gets a nice surprise in the form of a booby trapped coffin and some of the sudden violence can be funny because it arrives when least expected and lasts longer than you’d think.

Granted, as this film was made back in 1967 the bulk of the violence is mostly bloodless and tame by today’s standards. Yet Hasebe makes the most of whenever someone gets hurt or has to make a sudden or planned out exit from the film’s cast. Some poor sap gets his hand smashed by a barbell (ouch!), sharp objects get used creatively and even a simple fistfight looks really painful for those involved. The final gun battle is super stylish with that expected air of inevitability that kicks the movie off. Everything is shot and edited marvelously and in glorious black and white that looks absolutely beautiful on Blu-Ray. While there is a English dub audio track option, the film works so much better in its original Japanese that I’d recommend skipping the localized version entirely. Subtitles are clear and easy enough to read and it’s clear that the cast was intent on making this the best damn film they worked in that year.

As it’s a relic of the past, don’t expect women to be treated anything close to correctly. They’re either dead girlfriends, half-naked dancers or background ladies of little importance to these gangsters. Then again, this IS a film about a slice of yakuza life and bad men do bad things to women in that life. Hasebe’s follow-up to this film was the excellent and violent 1968 potboiler Retaliation, another yakuza film with less women and a similar fate for one that only briefly affects its main character. Yes, you’re rooting for a very bad man to kill a bunch of very worse men throughout Massacre Gun. But it’s a ride worth taking no matter where your moral compass points to. Hell, if anything the film will let you know that this sort of revenge is a really crap idea because you’ll probably not be around afterward to piss on anyone’s grave once you get your revenge.

As far as special features, there are a few to view with the best being the new interview interview with Jô Shishido where he covers parts off his career and discusses his plastic surgery as well as second surgery to have his cheek implants removed. He reveals that he had saved a great deal of career memorabilia (including a graphic film of his implants being removed shot at his insistence), but everything was destroyed in a fire some years later. There’s also a lengthy discussion by critic and historian Tony Rayns on the history of distributor (and Japan’s oldest film studio) Nikkatsu Corporation. As this was a review disc, no manual or cver sleeve was included. But that’s a great way to keep one’s focus on the film and features themselves and not on anything aesthetic and optional. Anyway, score another one for Arrow Video, right on target.