For too many reasonable to reasonably odd reasons, after all these years, I’d never seen ALL of the Mervyn LeRoy/Busby Berkeley film extravaganza that is Gold Diggers of 1933. I’d seen the fantastic beginning many years back as a kid, but it was late at night and I fell asleep at some point, waking up to some other film playing. Another time, the film was on but I missed about half of it and I hate sitting down to watch half a film, and the back half, as that.

Years later, it was on rotation on TCM by this time, so I figured I’d always catch it at some point. By then, I’d seen 42nd Street, Footlight Parade, and a few other similar musicals, so I thought it would be along the same thematic lines. It is to some extent, very much like the others: a simple plot but elaborately made escapist film for the masses.  With its fantasy of three pretty young ladies in a Depression-era New York City finding love and wealth despite their showgirl roots and assorted shenanigans via a case of mistaken identity that stretches credulity as it should in a film like this, it was gong to be as light and breezy a time as could be, I thought.

He’d buy that for a dollar: Aileen MacMahon, a lucky Guy Kibbee and Ginger Rogers, who. despite her charms, doesn’t get the guy here.

It took me being laid up, exhausted and annoyed this week to finally sit down and see the film to relax and let’s just say I was more than surprised with what I thought was going to be a light and airy pre-code slapstick musical to laugh at and with. Yes, it has plenty of laughs, the women are drop-dead lovely and there’s some great takes on morality and hypocrisy in its tale of a Broadway show funded by a benefactor who happens to be both an ace songster and a guy with a secret (shhh!). I’ll let those of you who’ve not yet seen this discover the plot’s bumps and grinds yourselves, though. I need to go on for a spell about no, not the beautiful women or how they were shot and lit perfectly here, but the film’s finale, which is equal parts phenomenal and depressing in its distillation of the treatment of US war veterans of the era.

It’s also a film where a picture says a thousand words, so I’ll just post some more here:

The film has few echoes of what’s coming, but you’ll know from its dialogue it was made at a time when the world was in trouble. The Great Depression had been the cause of quite a few financial woes and certain happier movies were one escape both poor and rich could enjoy to lighten their spirits. In some cases certain movies made a terrible situation a bit more palatable by embracing and overcoming the darkness outside in the real world. Gold Diggers of 1933 took three of its four leading ladies Polly (Ruby Keeler), Carol (Joan Blondell), and Trixie (Aline MacMahon), placed them in a Depression era New York City setting and lets them have at a few of the male characters. While Powell’s character knows the deal, the other two (Warren William, Guy Kibbee) get put through the wringer and then some.

Interestingly enough, Fay (Ginger Rogers), is the other girl of note here, but she only gets to sing “We’re in the Money” (partially in Pig Latin!), show up in a few key scenes and production numbers and generally, look fantastic throughout before she disappears. Her really big time was ahead, though. This flick was only a small step to a far larger career. 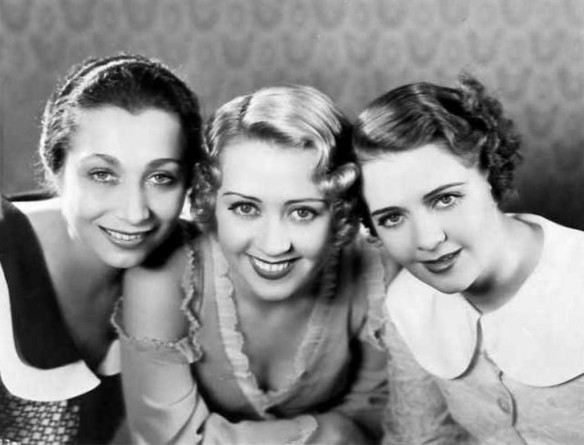 Ginger gets the opening, they get most of the rest: Trixie (Aline MacMahon), Carol (Joan Blondell) and Polly (Ruby Keeler), going gold hunting later.

The film closes with the staged number “Remember My Forgotten Man” with Joan Blondell’s Carol reciting through the song’s opening lines before getting dubbed by well-known singer Etta Moten, who also sings herself in one shot (and would later appear as Bess in Porgy and Bess). It’s an extremely (and literally) moving piece, with many extras as soldiers marching to and from battles, men on soup and bread lines, and the entire song being as realistic a departure from the earlier goings-on as can be. It almost seems to be dropped in from another film, save for one character mentioning it earlier as an idea for a production number. The performance was itself, a tribute to the “Bonus Army” protests and the men who went through them and is a powerful ending that can’t be easily forgotten.

Interestingly enough, the film was supposed to close with the creepy and hilarious “Pettin’ in the Park” number, notorious for Billy Barty, playing a somewhat rambunctious baby, who raises a large curtain as a few dozen women are changing and later, hands a can opener to Powell’s character so he can get into a metal bustier worn by Keeler. Now, That’s Entertainment, folks! Hey, I did say it was pre-code, right? That said, I wonder where the film would have ended up with both sequences placed in a different order, as the more dramatic performance is a total gut-punch and I could see a need for light, sexy fun after all that perfectly choreographed drama.

Is it a protest song, a memorial or both? It’s memorable, that’s for sure.

There’s another number, “The Shadow Waltz” that’s got Powell warbling while ladies playing neon tube enhanced violins glide and spin about. Whatever Busby Berkeley was using for inspiration, it certainly put him at the top of his game in this and the other big performances here, that’s for sure. “Mesmerizing” is pretty much all I can cough up when seeing this sequence. For the record, I’m not at all a superstitious person, but I’ll also use the descriptions “Angelic” and “Ethereal” to describe Berkeley’s work. Or, I can just say, the guy sure as hell could come up with some heavenly, masterful ways to make those gals look stunning.

I did feel much better after watching the film, even though then final performance had me thinking what sort of impact it must have had when it was showed to audiences of the time. It wasn’t taking sides one way or the other, I felt. Instead, the film was asking a valid question while showing a shade of a wisp of what many went through in the Great War, which was still affecting people on a few fronts. There were a few other post-code films in the Gold Diggers series, but this is the best one in my book and it’s still a hot number after all this time. The others are fun, but feel a bit diluted thanks to morals impressed on them in by the new rules forced in place.

Sister, can you spare a dime?

So yeah, go see it on TCM or disc if you must own it. I won’t tell if you check it out via other means, the current economy for some being what it is. Ginger might waggle a finger at you with a curt “no, no, no!”, but I’d bet you’d like that just fine.