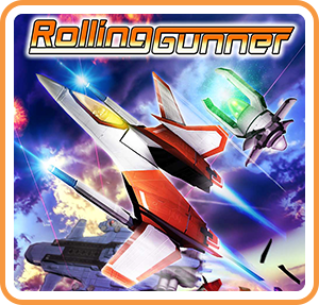 Holy hell, mebius.’ Rolling Gunner ($19.99, buy it!) is completely NUTS, but in the best possible manner. Its very high level of accessibility and four difficulty modes mean you don’t even need to love or be somewhat decent at arcade shooters in order to get the most enjoyment from it.

In fact, the game is programmed to teach you how to play and as a friend who popped by to borrow some movies who also ended watching me play noted, “It’s really hypnotic to watch all that craziness!”, which had me cracking up as I completed the game (on Novice mode with a somewhat low 17,419,459 points) and restarted it as I handed him a controller and let him have a crack at the Training mode. Let’s just say he rather liked the chaos even that short stages offered, but he doesn’t yet own a Switch. Which is okay for now (his kid wants one for his birthday coming up in July, though, so I’m compiling a list of games for his dad).

Anyway, there’s a story here about a big corporation discovering a new element at the bottom of the sea, that element used to create a few initially helpful items and as usual, those items being used for some not so helpful things. Yadda, yadda, yadda, it’s now March 18, 2061 and you’re tasked with rolling out in one of three trusty STORK class warships to destroy the enemy fortress and a few thousand enemy ships, tanks and other robotic doom-throwers along the way. The game of course, notes the following in its helpful digital manual: “This story is fictional. The people, groups, and names that appear are fictional, and have no basis in reality.”

Gameplay is that pure bullet hell (danmaku) bliss that uses a fun risk-reward style of play where the closer you are to enemies (without taking a hit, of course), the more medals and points you’ll accumulate. Your STORK has a Gunner pod that automatically changes firing direction while moving but can be fixed into different positions to take out enemies from different angles while also destroying smaller enemies it comes in contact with. Novice and Casual modes drop bombs automatically one at a time, while Original and Expert modes drop all your stock at once (meaning you’d better be snapping up any new bombs that appear during a level). I found myself laughing more than I expected, particularly after trying Original mode for spell (which upped my score on that mode considerably), and feeling too overconfident, jumping into Expert mode where things got quite busy on the “Holy $#!+, that’s a LOAD of shots coming at my ship!” front (BOOM!).

Some four years of work went into the game and it shows in every area. Visuals are rich and colorful, getting a boost via OPTPiX SpriteStudio that enhances the assorted backgrounds and some snazzy mission end cut scenes. On the audio front, the music is perfect 90’s era arcade brilliance from COSIO and sound FX are appropriately shmup-worthy. There’s one odd and perhaps intentional quirk during a mid-game boss battle where the planet backdrop loops like someone loaded the same slide into a projector, but it’s a case where you’ll be too busy trying not to get blasted into space dust that you may not notice until watching a replay (the game saves up to eight for later viewing).

One element I loved was the bosses expiring in slow motion (nope, that’s NOT the Switch choking up on all that debris on screen) very much like how some fighting games show a final blow as a slower, drawn out hit. It’s a very nice touch that adds emphasis and coupled with the aforementioned level-end cut scenes, makes each of the six stages that much more thrilling. The game looks fantastic in docked or handheld mode, but I ended up playing docked after my first run just so my old eyeballs could take in all those teeny-tiny to ridiculously huge shots and have a few microseconds more to dodge and weave about. Your mileage will vary, as will your score, but I’ll heartily recommend Rolling Gunner to any arcade shmup fan new or vintage because it delivers the goods and then some as a replayable instant classic that will cater to every skill level.