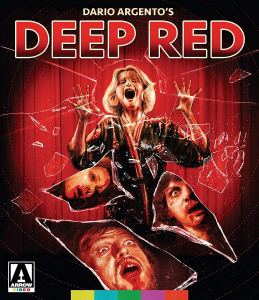 I clearly wasn’t ready for Dario Argento’s Deep Red way back when I saw it on a somewhat beat-up rented VHS tape back around 1990 or ’91. While the 1975 film had some primo scares (such as that freaky clockwork dummy scene and the genuinely gory brilliance in its stylized murders), the story seemed to be a bit chopped up to the point of distracting me a wee bit too much. Hey, I often tend to pay attention to the plot more than the violence in most horror films, so sue me. Flash forward to Arrow’s 2016 UK restoration (finally getting a North American release) which adds back in scenes that were cut and makes one of Argento’s best early films even better. Granted, it’s not going to be for everyone (yes, it’s quite violent), but as with many gialli, you more or less know what you’re getting and you’re going to get it but good (and in both eyes, at that).

David Hemmings plays Marcus Daly, a British jazz pianist who ends up being the target of a killer after he sees said killer killing the hell out of some hapless victim. During the initial police investigation, Daly’s photo is snapped by snippy, snoopy reporter Gianna Brezzi (Daria Nicolodi), who inadvertently puts Marcus in grave danger after posting his handsome mug in the newspaper. As in his earlier The Bird With The Crystal Plumage and The Cat O’ Nine Tails, you get leading men who get in well over their heads once they try to do a bit of extracurricular detective work and yes indeed, Daly gets put through the wringer but good. This is also another Argento film where a woman saves the lead from certain death, with Nicolodi’s Brezzi making a strong impression as a gal who’s no screaming wallflower at all.

Near the height of his creative powers, Argento’s assured direction is so on point that while the mystery and violent horror elements are the hook, the rest of the cast are also top-notch. The restoration adds more bantering between Hemmings and Nicolodi that was missing from the US cut. There’s a whole subplot with Daly and Brezzi more or less doing a version of “Everything You Can Do” verbally and physically that ends up making her rescuing of him somewhat amusing (in a good way). It’s also great seeing Nicolodi play such a fun to watch character while if you think about it, Hemmings is a talkier (but still somewhat of a jerk) version of the character he played in Antonini’s Blow-Up. Granted, Nicolodi is the key here because as in her sexier role in Property is No Longer a Theft, for example, you can’t take your eyes off her antics.

Sexual politics make for sparks between the leads but also make for the interesting casting choice of having a woman (Geraldine Hooper) play a too-brief cameo as Massimo, the lover of Daly’s gay friend Carlo (Gabriele Lavia). Like some of the other characters, even Massimo is a suspect in the murders, but only for the briefest of moments as the actual killer gets to killing after he vanishes from the picture. The film’s reliance on its stylish murders plus cleverly using distraction works throughout as Daly slowly figures out what he saw wasn’t quite what he needed to see. This keeps him in danger right up to the point the killer is revealed (it’s not who you think unless you’ve been playing detective in your head for the bulk of the film).

The nice double disc set has a bunch of special features that should also glue your eyeballs to the screen (er, without the glue, of course):

One thing of note if you’re watching the longer restored US version first: The English audio track on the longer cut has some portions of English audio missing because English audio for these sections was either never recorded or has been lost. You’ll get those parts of the film in Italian with subtitles, which is a far better option than no subtitles or hired actors trying to sound like the actors in the film, I say. Is this a “date” movie? Well, sure… provided either you or your date can handle what’s here or can at least take turns covering each other’s eyes when the killing start. I say brave it through, though or you’ll miss quite an impressive horror film that still has an edge.