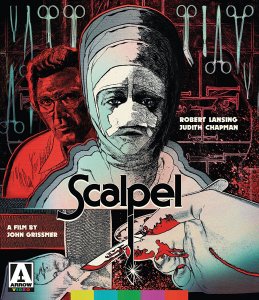 John Grissmer’s 1977 film Scalpel is a pretty neat psychological thriller that also works as an entry level ‘light’ horror flick for those skittish types not quite ready for gore galore, but who won’t mind a tiny bit of depravity in the plot.  Arrow Video has not only put out a stellar restoration, they also got respected cinematographer Edward Lachman to supervise am equally gorgeous second transfer that’s been color corrected back to his original theatrical version.

While there are some flaws in the storytelling, it’s a solid enough film to recommend thanks to the no-nonsense performances and relatively brief 95-minute running time.  Having the choice to see both versions on a single disc along with some very nice bonus features makes this yet another Arrow you’ll want to add to your quiver.

When plastic surgeon Dr. Phillip Reynolds (Richard Lansing) encounters a badly beaten stripper with a completely ruined face, he comes up with a plan to reconstruct her to look exactly like his missing daughter (Judith Chapman) in order to claim the $5,000,000 inheritance denied him, but given to her by her grandfather.  He’s also got more disgusting designs on his mind, but you’ll have to see how that plays out.  After the young woman is out of surgery and healing up, Reynolds takes her out of the hospital and to his home, eventually telling her his plan and offering to split half the money with her.  After some weeks of coaching, the girl is ready for her close up with Reynolds’ extended family.  While their ploy succeeds to some extent, things get a wee bit complicated when Reynolds real daughter (also played by Chapman) shows up shortly thereafter. Oops, and yep, the plot thickens. 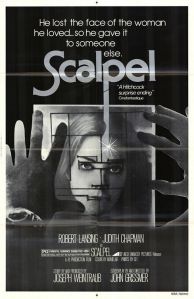 Telling more would spoil the Southern Gothic fun, so I’ll shut up about the story and talk about the film itself. While there as some brief nudity (a body double) and an icky looking but fairly tame surgery scene, this is something that nowadays would be a movie of the week variant on one of those crime channels. Lansing and Chapman do solid work with their parts, but you’ll need to pay close attention to Chapman’ work so you can catch some subtlety between her roles as the not quite “twins”.

The film may remind some viewers a tiny bit of one of Brian De Palma’s Hitchcock homage flicks, Obsession, but the faux unbalanced twins angle found in Sisters doesn’t quite get a side-eye glance here. Actually, Lansing’s twisted doc is the film’s creepy center, as he’s quite a piece of work with his penchant for doing away with people he just doesn’t like much. That said, the ending is a corker, grin worthy, albeit not too unexpected.

In terms of those special features, there’s an excellent set of interviews with Grissmer (who also made 1983’s gory and horrifically amusing Blood Rage), an interview with Lachman on his transfer and why it was a necessary inclusion, and a fun interview with Chapman as she reminisces about everything from getting part, temporarily leaving the soap opera she was a part of, and how the makeup effects ended up being bad for her skin (although she does look great these days). As far as its overall impact, I’d say Scalpel works well for what it is and doesn’t go too far out of bounds despite a few plot holes here and there.

(Review disc provided by the publisher)