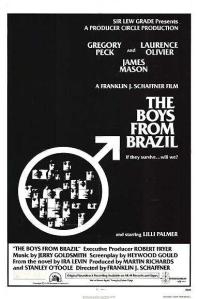 Depending on your frame of mind, The Boys From Brazil will either creep you out of make you laugh a wee bit too much. It will do both if you’re somewhere in the middle on the mental front (or are a first time viewer), but I’ll leave you to let this one settle where it lands. Franklin J. Schaffner’s signature directorial style is on full display here as this semi sci-fi/dramal/horror flick does its thing with some interesting casting choices, dialog ripe with amusing yet nasty situations and a number of creative demises for a few characters.

Granted, the subject matter is a bit touchy to some, what with the book and film positing real-life Nazi war criminal Dr. Josef Mengele (Gregory Peck!) as alive and kicking and still working on a pretty outlandish experiment that involves almost a hundred little Hitlers. But the film pulls you in right from the start and keeps you watching as the bad, mad doctor’s plans slowly but surely come to fruition. Well, sort of… 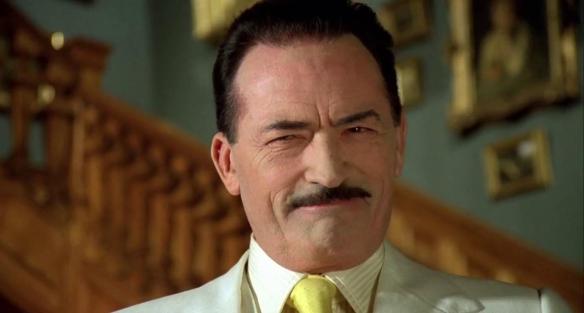 You wouldn’t buy a used car from a guy with this smile, would you?

There’s also what you could call some clever and amusing stunt casting with Steve Guttenberg playing it serious as Barry Kohler, a young Jewish man dinking around Paraguay who accidentally discovers a bunch of former Nazis still kicking around the idea of rebooting the Master Race through a plan they’d set in motion during and after World War II. Just as you’re getting used to seeing Guttenberg as an OK leading man, he’s bumped off (oops), but not before getting the attention of aged Nazi hunter Ezra Lieberman (Sir Lawrence Olivier), Initially Liberman blows Kohler off, but ends up back on the case and hot on the trail of those aforementioned whopping 94 cloned versions of Adolf Hitler. Eeek.

Now, before you get too boiled, these aren’t full grown Heilers from Hell just yet. The plot twists in an interesting manner where these are 94 teenage boys whose parents’ lives mimic that of Hitler’s (the fathers are all civil servants dying at age 65 and the mothers are all aged 42 and spoiling their kids to no end). Lieberman has to contend with not only a few murders happening around him (the civil servants getting bumped off in some kooky manners), but his own life being in danger after Mengele gets wind of him on his case. The mad doctor also has his own problems as his plans are squashed by the powers that be once word gets out that they’re discovered. He plans to keep things going until the bitter end, but he’s betrayed by his superiors and has to hoof it up into America to take matters into his own murderous hands.

(Thanks, robatsea2009!)
This sets up the film’s awesome, hilarious and bloody showdown between Mengele and Lieberman in a little farmhouse in Lebanon, PA that starts with a surprise, a cheery greeting and a gunshot, followed by a knock-down drag out fight interrupted by some very pissed off Dobermans. Ouch and double ouch! It’s here that we meet one of those clones (Jeremy Black, who I actually knew back in the late 80’s and early 90’s) and he’s a cold, mechanical yet curious young chap who’s turning into a pretty creepy teenager with some interesting interests. Mengele gives a pretty amazing and way out there speech that kind of works a wee bit too well (to his dismay, as you’ll see) and the film ends on a nifty little ending that leaves the door wide open to some sort of follow up no one will make (or needs to).

Peck as an evil Nazi with too-black dyed hair is a hoot, but the man carries the menace when necessary. Still, his accent and delivery are going to make you crack up, especially in one scene where he discovers someone he sent out to kill instead attending a big Nazi dance and nearly strangles the poor guy.  As the man’s wife is screaming for a doctor, Peck growls out “I ammm a doc-tor, you ID-I-OT!” before making sure the man isn’t that dead. His lengthy and dramatic (yet also pretty funny) speech near the end, and heck, the entire section with Olivier’s Lieberman is great stuff because both men are bouncing lines off each other like bullets off of Superman’s chest, but Peck wins here because he’s got more to say and does it with gusto. 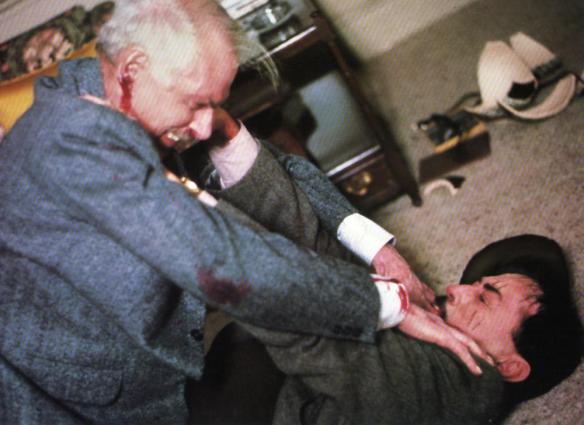 Someone needs to be saying “Is it safe?” right about now…

Toss in a beautiful Jerry Goldsmith score where the great composer gets things off with a banger of a waltz and does a bit of international dread on the move as the film hops around the globe (it’s one of his best scores of the 70’s) and you get grand flick that’s well worth tracking down. Of course, you HAVE to see this on a double feature with Marathon Man just to get Olivier playing a crazed fake Nazi dentist trying to find out if Dustin Hoffman knows anything about those damn diamonds (“Is it safe?”). Yeah, both films are thrillers and very well made, but as I said above, you may find yourself laughing uncontrollably for all the wrong or right (or Reich) reasons.

1 thought on “Random Film of the Week(end): The Boys From Brazil”