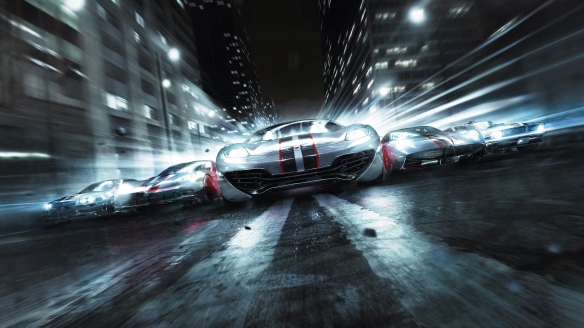 The team at Codemasters has been hard at work making GRID 2 into their best racing game to date and it shows. I’ve been a longtime fan of their racers from the goofy fun of their many Micro Machines games on the Sega Genesis and Mega Drive to the TOCA and Colin McRae Rally and DiRT games, and also love their F1 stuff, so getting to play a bit of this new game was more than a pleasure. It was the PC version up and running on some high-end Intel laptops, but console fans needn’t worry about their versions suffering, as the newly beefed up Ego engine is extremely flexible across multiple platforms. Unlike certain other popular (and great) racers, this isn’t about amassing a gigantic car collection, open-world exploration at one’s own pace or racing for big bucks. The focus and theme of “Be Fast, Be First and Be Famous” along with the interesting use of the ESPN license and assorted in-game “social” features combined with the intense speed and handling should make this a game that’s going to get quite a bit of play when it finally rolls into stores.

I got to watch a few setup movies to each part of the demo, followed by watching live gameplay for each section (Barcelona, Austria’s Red Bull Ring and Chicago) before getting some hands-on time on each of the three courses. Rather than try for another Car/RPG hybrid, this time out players will be set up as an an up and coming race driver who catches the eye of one Patrick Callahan, a self-made multimillionaire and diehard racing fan who dreams of setting up the ultimate racing series as a new form of motorsports. Determined to find the best drivers around the world from multiple disciplines and pit them against each other in a series of races set around the globe, you find your driving skills put to the test in a series of challenging races. While I only got to try street courses in Barcelona and Chicago plus one road course in Austria, there will also be drifting challenges in Asia to tackle (which should be amazing).

What works well here is the streamlining out of certain elements that slowed the Pro Race Driver and DiRT games down between races. You start out in a basic garage and as your fame grows, your garage changes accordingly. Since the goals are clear, you’re not out earning money for upgrades or new cars in the usual progression. Fame is the game’s currency this time out as your wins help propel Callahan’s World Series Racing League into the televisions of virtual fans who start turning up in larger amounts as the game progresses. You’ll also attract more sponsors for future events, which means flashier looking venues and ESPN coverage, here portrayed in video and voice segments with  actual anchorman Kevin Connors and Motorsports Analyst Toby Moody helping spread the word. These sections add to the immersion, provided you’re all in on the game’s idea of a new racing league and don’t mind playing along.

In solo play, cars are grouped into four Tiers and you’ll be racing in certain cars in each Tier as the game progresses. This should help in mastering each car, but the dev team has done some incredible things with the new Truefeel handling, damage modeling and AI that have to be experienced. On one beautiful road course I tried out a few times, I saw a multi-car wreck at a corner ahead that I managed to avoid by braking and swerving around debris, while another attempt saw a car spin out as I passed it, taking another car out that clipped mine and sent it off the track. The damage modeling is fantastic, as now carbon fiber bodies crack as bits fall or fly away, as opposed to the metal cars here denting and eventually losing damaged parts. It’s entirely possible to hit debris on the track that, combined with AI drivers taking advantage of your misfortune, can send you from first to last within seconds. Conversely, should you see an opportunity to blow past a driver that’s had a slip-up, you’ll be pleased to see the AI isn’t going to rubber-band itself to you and has to fight equally as hard to regain position.

The balance between arcade racing and simulation is a tricky beast indeed, particularly among certain groups of racing fans that demand one over the other, every frame locked in at 60 or bust, complete, working dashboards and the ability to use a steering wheel and pedal setup and on and on. On the other hand, the team wants as many players from novice to veteran to be able to jump in and PLAY their game with as little fuss as possible. While I do miss the dashboard viewpoint from older Codies games, the fact that GRID 2’s gameplay is rocket fast with no margin for error in the faster cars no matter which view was selected is a nice tradeoff. Sure, some really cranky fans won’t be convinced of this at all, but I say once you try the game out, it’ll be very hard to put down thanks to that handling and the intensity of driving on the courses the team as modeled from real-life locales.

As noted, on PC, the visuals are quite mind-blowing and I know I wrecked a few too amny times because I was checking out backgrounds, car damage effects, smoke and other stuff when I should have been focusing on the road. I also never sleep much before big press events, so that could have also had something to do with my performance issues. I did complete that twisty Chicago course after a few close calls and coming in second on that Red Bull Ring after the AI wiped out on one curve was pretty exhilarating. I had trouble with the Elimination race in Barcelona mostly because I hate those types of events and also because the AI slammed me around something fierce on some of the turns as I was trying to learn the track. Ah well – I always do better at home after spending time practicing.

While I can’t say anything about Multiplayer (hey, I only got to do some fun solo driving against some really fierce AI), Codemasters is promising a revolution in that area as well. I’m keeping my eyes peeled for videos to drop (soon enough, I’m betting). I think the game may even support split screen play as well as a bunch of online modes, but I’ll wait for the official press release before I speak too much (or too soon). In any event, set your clocks and calendars, racing fans – May 28, 2013 is when the next road racing revolution begins…

1 thought on “GRID 2 PC Hands-On: Codemasters Is Hitting The Road With a Superior Sequel”