Don’t get pushy. mister. It looks bad to the hired help. 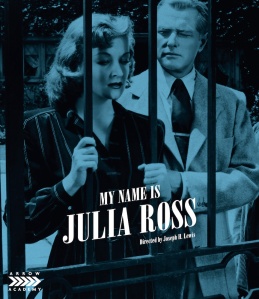 Clocking in at a taut 65 minutes 2 seconds, Joseph H. Lewis’ (Gun Crazy, The Big Combo) excellent low-budget sort of gothic noir My Name is Julia Ross will keep you guessing until its very end. There’s a feeling of immediate regret for its lowly heroine (played by Nina Foch) as the down on her luck expatriate ends up taking a secretarial job that puts her life at risk as as she’s taken in by a crooked family that means to do the poor girl in. Why this is happening to her is a little mystery the film will have you wrapped up in for its entire running time and the conclusion closes a tight thriller in just about perfect form.

Julia wakes up with a new name and location wondering what the heck is happening and why she’s wearing monogrammed clothing with someone’s initials. We previously see all her items being trashed by her new “family”, so it’s a case of dread for her fate a few minutes in. Her sole out is perhaps a local gal who works in the mansion she’s trapped in who works as a maid, but even she’s not as sharp as Julia turns out to be at the end. Julia is initially a bit addled from the “medicine” forced into her tea every morning, but her determination keeps her from losing it despite her “mother” (Dame May Whitty), “husband” (George Macready) and a few others making her life a living (albeit luxurious) hell. Living there isn’t the worst thing for Julia… except for the dying part her kidnappers want her to play for real.

The film excels in it moody settings (it’s very carefully shot throughout), but that sunny town Julia wakes up near is also unsettling when she finally gets out for air under duress and her only hope is the letter she mails off after it’s thought to have been switched out with blank paper. Even then, the film has a few surprises in store. Everyone’s on point as far as the acting goes and while the plot has a few holes in it, it’s still a jam-packed with thrills good time overall. Plus, it’s short and tells a tale you can get into right from it’s beginning and stick with until the very end without too much suspension of disbelief. About the only thing “wrong” is the ending where a now free captive jumps headlong into a legitimate marriage without a second thought. But hey, that’s Hollywood in 1945 for you.

Arrow’s transfer to Blu-Ray is lovely overall and you get a solid commentary track from film noir expert Alan K. Rode as well as an excellent bit of on Joseph H. Lewis at Columbia Studios from the Nitrate Diva herself. If you want to, you can also look up the 1987 semi-remake Dead of Winter as well. but I like what’s here a lot better. Overall, it’s a solid and surprising film from Lewis, a journeyman director who made a number of low budget films including a few classics in assorted genres. Very highly recommended.

Ooh. evil! Dame Mae Whitty and George Macready have plans for poor Julia she wants no part of. You’ll see..

3 thoughts on “Review: My Name is Julia Ross (Blu-Ray)”