How do you say “bleak as hell” in French? 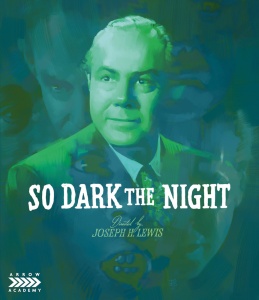 Deceptively beginning as a charming budget flick, Joseph H. White’s 1946 film noir So Dark The Night becomes so much its name as it devolves into sheer bleakness despite a fairly cliché-filled script. Without spoiling too much, its tale of a defective detective is a lot less Clouseau and a lot more Hitchcock as time goes on. But on a second viewing, it’s clear that the cheery tone the film begins with is a perfect setup to what’s to come.

When happy go lucky but weary Parisian detective Henri Cassin (Steven Geray) takes a much-needed vacation to a peaceful French village, a series of murders occur that has him using his years of well-honed skills to solve the crimes, but a proper solution escapes him until he realizes the shocking truth.

This corker of a thriller is expertly directed and shot, clocking in at a tidy 71 minutes has a few issues, but considering them in a film that looks so polished when judged in today’s terms, it’s a hidden gem that deserves a second look. Yes, some of the “Frenchiness” is stereotypical Hollywood and parts of the third act seem as if they come out of thin air. But when you realize what’s taking place earlier may be the results of a deluded mind (and excellent score), it all makes sense.

Yes, the smartest fan in the room can figure out the plot before the downbeat finale. But that change in tone is indeed an interesting one White takes a chance with thanks to a neat lighting trick and a few unusual camera angles at key moments during the film that show a distressed mind at work. While shot entirely in the US, the film still has enough flair to feel as if it’s a foreign production at times, albeit one on a tight budget. About the only thing “off” here is Micheline Cheirel’s portrayal of Nanette Michaud. She’s absolutely fine in the part, but looks a bit older than the sweet but too easily swayed teenager that falls for an older man and has a jealous boyfriend with potentially murderous intentions.

The film guides you down one path where you think it’s headed before a switch to a psychological thriller where a modern rewind feature will come in handy for those that are missing the boat. Amusingly, there’s a hunchback character who’s one of the film’s smarter characters in terms of the investigations, but his screen time is limited because in the grand scheme of things, our detective is more of a focus. Speaking of focus, Arrow’s transfer is lovely work overall, and you get added commentary from critics Glenn Kenny and Farran Smith Nehme as well as a nifty featurette titled So Dark… Joseph H. Lewis at Columbia from film critic Imogen Sara Smith.

Overall. it’s another winner from Arrow worth looking into picking up if you’re into odd noirs of any sort.

4 thoughts on “Review: So Dark the Night (Blu-Ray)”