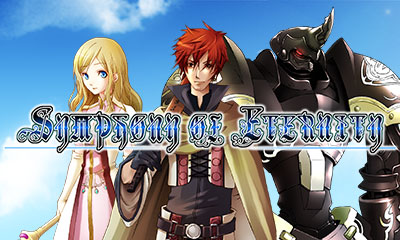 Grrr. I like a few of Kemco’s old-school style JRPGs, but I avoid the mobile versions because I hate playing games on a phone and having ads pop up every five minutes because I’m a complete cheapskate who doesn’t like buying additional content if a game says it’s free to play or has a budget price point.

Amusingly enough, I’ve picked up a few of their PSP, Vita and Nintendo 3DS releases over the years and for the most part, like what I’ve played. That said, their latest Nintendo 3DS/2DS game, Symphony of Eternity, ($7.99, Nintendo eShop) is making me go cuckoo because while I like it so far, warts and all… it’s hard to see the darn game thanks to a kooky design choice.

For some reason, the game (initially released as a mobile game in 2013) uses at least FIVE static camera viewpoints and three of them are atrociously tiny bird’s eye views where everything on the top screen is too small except the text in dialog scenes. 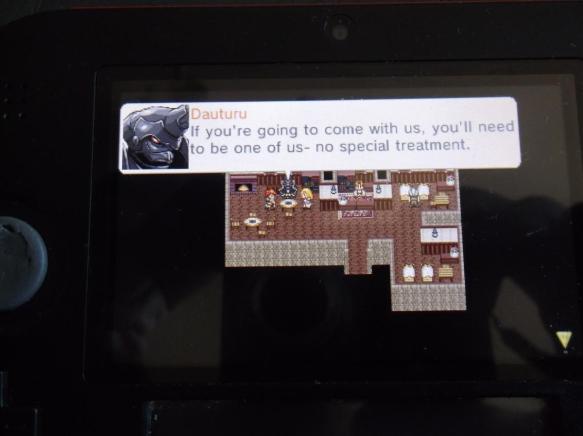 If you think that’s bad, here’s an early dungeon map. Note the knife-twisting injury to the eye a la a Lucio Fulci film that is the SMALLER map on the lower screen:

Here’s the third viewpoint the game uses and it makes the most sense because it’s the full screen overworld stuff you’d expect. Easier to see on the small screen and nicely nostalgic, although you run into no random battles (from what I’ve played so far): 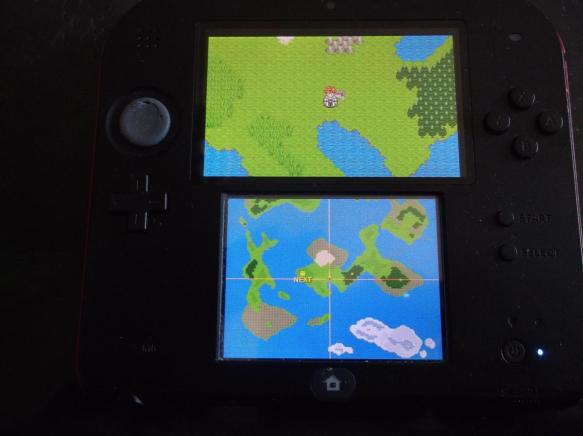 On the other hand… walk into a town and look at the not at all clever misuse of top screen real estate (and a too tiny lower screen map, again): 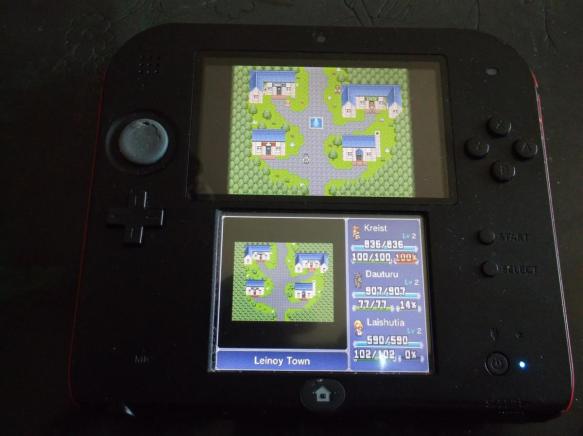 That said, I like the overall vintage look here quite a bit right down to the Final Fantasy-style artwork. But wow, the visuals should have been scaled up or redone for those of us who have an older 2DS. Well, at least the battle scenes default to full top screen glory, tiny characters and all: 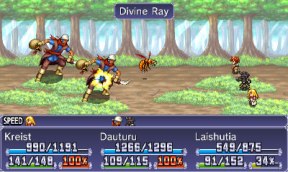 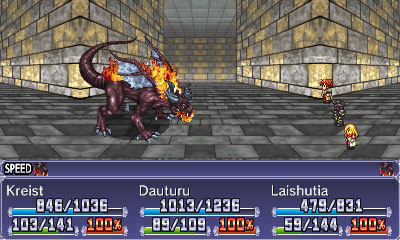 Hmmm. Yep, tough love here because I like these games enough to be critical without being a total jerk about it. Okay, mostly. Anyway, I’m going to finish this game and post a review once that’s done, but my eyes are going to kick me in the head all the way through this one, folks.

Back in a bit. I’m going to need a good magnifying glass for this one. Hey, it’s cheaper than a New 3DS XL (which, note to self would be a great gift idea for someone as ancient as I am).

2 thoughts on “Symphony of Eternity VS My Old Eyes”