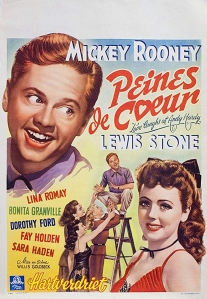 This French poster looks as it was started in 1909 and completed a few dozen years later.

“Well, I certainly wasn’t going to laugh…”  is what I immediately thought after viewing this tepid 1946 film on TCM a few evenings ago. To be fair, I’d seen a few Andy Hardy films in the past and found them to be drolly amusing light comedies and as fluffy as could ever be possible, especially the three with a young Judy Garland as Mickey Rooney‘s co-star. This effort, however just left me cold and in a few parts, rubbed me the wrong way save for one performance that steals the show.

The absolutely drop-dead gorgeous Dorothy Ford was actually 5′ 11″, but played her too brief part as Coffy Smith at well over six feet in heels and yes, steals the film from Mickey Rooney’s tired but competent shenanigans. She also turns out to be the “wisest” character in this film, offering up some sage relationship advice and dealing with having to dance with Rooney in a lively, but paradoxically strangely dull sequence where her height is the butt of a few jokes. Andy being about breast high being one none too subtle bit, but that’s actually funny for a few seconds.

Then again, the film very likely will be loved by the comfort flick crowd for a lot of the usual things the franchise was known for. You get that long Andy and Judge Hardy (Lewis Stone) talk with morality and choices as the center, and yes, the family Hardy is as wholesome as Instant Ralston with Jam, and cream mixed in (ewww). There are some amusing moments like the homecoming sequence when Andy comes back from his service in WWII, and a few of the college scenes are cute and chuckle-worthy. Still, for me, the film was a chore to sit through because of the “Poor Andy Hardy” scent emanating from the plot. 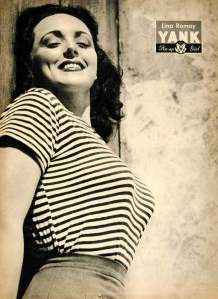 From a magazine with very simple and direct instructions.

After getting home safely from the war (Rooney was actually enlisted in real life, served as an entertainer for the troops and was awarded the Bronze Star for his tireless efforts), Andy is back at school studying for his law degree and he’s got one girl om his mind this time, the lovely Kay Wilson (Bonita Granville), returning champ from 1944’s Andy Hardy’s Blonde Trouble. He’s so smitten with Kay’s perfection that he ignores absolute and even more of a knockout Isobel Gonzales (Lina Romay) when they’re introduced, but that’s dedication for you, right?

Or sheer stupidity, as we’ll soon see. I mean, it’s LINA ROMAY, people (look left, please). Get a hold of yourself! Or don’t get a hold of yourself, as it’s what, 1946 and that sort of stuff didn’t happen then (he said, sarcastically). Andy Hardy’s None Too Bright, But He’s A REALLY Moral Guy, is the new title I’ve chosen at this point. 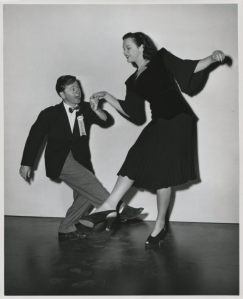 Kay needs to go out of town on a sort of emergency to see her guardian, so a schoolmate of Andy, Duke Johnson (Hal Hackett), hooks him up with Coffy and yes, you get all sorts of too expected and a bit insulting height gags crammed into a few minutes. Andy actually survives the incident and dance sequence and becomes Coffy’s platonic pal, and later she goes from tall student to tall student entrepreneur after she gets a figure-revealing leotard and it seems all the other girls in the dorm want to own one for themselves.

The Kay Wilson stuff is annoying for me because (spoiler!) she goes away to see her guardian and comes back, then after a very safe and chaste date with Andy, she tells him she’s marrying her guardian the next day (what?) and wants a floored Andy to be the best man at the wedding (WHAT?!!). Of course, Andy is too nice to say no, so he agrees and Kay gets wed to Dane Kittridge (Dick Simmons), an older man (well, he’s only 36, but he’s got a touch of gray hair and its taller and more handsome and successful than Andy) with Andy and a local priest as sole witnesses. After the wedding, Andy runs into Coffy and whines to her about Kay’s physical faults and basically turns into a jerk of a person (well, MORE jerky of a person). I think my brain was semi-soft by then, but the film wasn’t over. 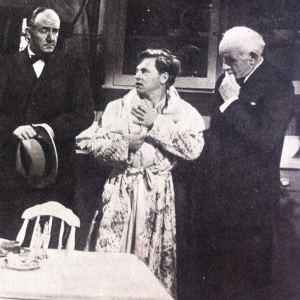 Andy goes into full-on “woe is me” mode for a bit as the plot kicks his fate around in some fitting ways, but yes, he gets a happy ending (quiet, you in the back!) when there’s a cycling back to earlier events and all is well. I did laugh out loud at the point he gets wired back a reply to job opportunity to become an engineer, though. Andy Hardy Can’t Get a Break, was now my new title for the film.

To tell you the truth, I personally wanted to see Andy Hardy get the film noir treatment here, with him going after Kay and Duane with a vengeance and turning into a short guy with a shorter fuse like Richard Widmark in Kiss of Death or Robert Ryan in On Dangerous Ground. Imagine this film ending with Andy, stalking off to do his dirty deed, only to get followed up with Andy Hardy, JUDGED, with him getting arrested for his heinous crimes and having to sit in front of Judge Hardy at the trial? Heck, if it were Pre-Code, the Judge would drop dead from the stress before he would be removed from the bench for being too close to the suspect and Andy would need to deal with that grief. Heck, maybe we’d see his mother, Emily (Fay Holden) get her revenge on Andy courtesy of a sudden dose of lead to his diet, but let’s not get ahead of ourselves here.

Anyway, I didn’t like this one much, but your mileage may vary and I’m fine with that because stopping anyone from watching a film isn’t my thing when all is said and done. Rooney made one final Andy Hardy film, but it was in 1958 and I haven’t yet seen it. I heard from a friend when we talked about this particular film that it’s more or less an example of the law of diminishing returns getting what he called “the devil grin seal of approval”,  but that certainly wasn’t a glowing hot (hee) recommendation to watch it at all.

In fact, I was told to avoid it and maybe watch Rooney in a terrifically bad horror film he later made, but I’d already seen it (a few times). Man, that guy had a very long and very varied career, didn’t he? Still, if TCM ever shows it and I’m around… well, that’s a maybe slice of devil’s food of a watch for me, then.

As usual, we shall see.