Go get that popcorn going, this one’s quite a doozy.

While it’s not that much of an “obscure” film these days thanks to a few DVD and Blu-Ray disc releases over the years, J. Lee Thompson’s wild fantasy/horror western The White Buffalo goes way the hell out of its way to be as surreal as possible (well, within the confines of a Hollywood studio film, circa 1977). If you’re allergic to allegory and go in expecting it to be a more typical manly-man weekend special Charles Bronson flick, it may likely baffle you with its mystical and more surreal elements even though it definitely delivers the goods on the action front.

If anything, this Dino De Laurentis produced follow up to 1976’s (not quite as classic as the true classic) remake of King Kong suffers from too little scope due in part to a lower budget that, combined with a script that’s not fully fleshed out in spots, doomed it to death by a thousand critics slicing away with pen-knives and audiences who likely were expecting a more commercial flick. Today, it’s a different story as the film has garnered a bit of a cult following, warts and all.

One of these hairy dudes is Bronson, the other looks more like a hippie jackalope. Uh, wait. a sec…

Still, it’s an excellent showcase for Bronson, as he completely inhabits the role of an ailing James Butler “Wild Bill” Hickok (or, James Otis as his alias here), who, after having recurrent nightmares about the titular creature terrorizing his mind, sets out to kill the beast but good. His competition for the prize: Crazy Horse (Will Sampson), whose infant daughter has been killed along with many of his tribe after a bloody rampage by the seemingly unstoppable, mountain wrecking, avalanche-causing monster.

In a kooky way, it’s more or less Ahab (from Moby Dick) meets Quint (from JAWS), but I don’t want to get too far with the literary or cinematic references even though the film is based off the novel by Richard Sale (who also wrote the screenplay). Let’s just say not every idea gels here, and to quote the late Milton Arbogast,

“You see, if it doesn’t jell, it isn’t aspic, and this ain’t jelling.”

That said, when it does gel, it’s like that time you used three boxes of gelatin and too little water and got something sweet you could bounce a silver dollar off of and have it hit you in the eye (ouch). Painfully palatable is a good description.

The film drops in a miniature who’s who of western stalwarts (Slim Pickens, John Carradine, Stuart Whitman, Clint Walker) and other surprises (well, if you consider Jack Warden and Ed Lauter “surprises” – both are excellent here, by the way) in small to large roles where you get a range of solid to decent to “where’s my check?” performances. Surprisingly, this sort of thing works to the film’s credit in the strangest manner. Between the stage play quality of the obvious sets and limited outdoor shots that together give the film a dreamlike quality, it’s hard to take your eyes of this spectacle (little joke there, folks… very little). 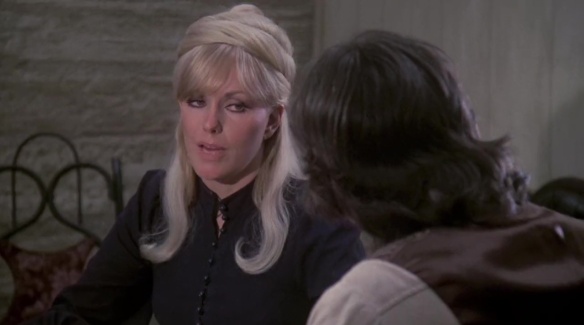 Kim Novak, gathering her part is somewhat for The Birds. Sorry, I couldn’t think of any Vertigo jokes, heh. Exits, stage left (right out the Rear Window, oops).

Perhaps the oddest bit of main casting is Kim Novak’s role as Mrs. Poker Jenny Schermerhorn, the lady of the evening with the auric aorta (is that less offensive or more than using “hooker with a heart of gold”? More, probably. But you’re not supposed to take this review too seriously). She’s fine in the small part she has, mind you (hey, it’s Kim Novak!). But given the stagey nature of the production, you half expect to hear a quiet disembodied voice noting “Unfortunately, ladies and gentlemen, Jill Ireland is ill, so tonight, the role of Mrs. Poker Jenny Schermerhorn will be portrayed by Miss Kim Novak.” right as you hit PLAY on your disc player of choice.

Well, unless you’re watching this with your eyes closed, some of the text on this poster is kinda true.  Oh, and buffalo aren’t bison, but yeah, that title as presented sounds better rolling off the tongue.

Although the film shows its white furry whale right at the beginning, Curse of the Demon/Night of the Demon style (and yes, I know Jacques Tourneur hated the monster forced on his film by Columbia Studios), the quick cuts during the film never let you get a really decent look at the Carlo Rambaldi-created beast, which is both a blessing and a curse. Thank goodness for that pause button, right? Or perhaps not, but it’s quite fun to see a good ol’ practical effect doing its mechanical thing. That iffy rear projection and other old school techniques made me wonder how someone like Albert Whitlock would have handled stuff his more carefully honed skills lent to even the cheapest of  films he worked on. But as noted, the dreamlike quality of the film aids in passing those FX off well enough.

Still, I can just imagine the excitement just boiling over (BOILING!) in the De Laurentis offices during pre-production*:

CR (grins broadly, as buffalo, er, BISON wobbles a bit on its mount like one of those cheap dog bobbleheads you often see in the back of a gypsy cab, circa 1975 or so)

DDL (suddenly loudly kisses Carlo on cheek, then gleefully slaps him on the shoulders a few times, before picking up the cigar and putting it in his shirt pocket): Carlo! Sei un genio!! (Dino snaps his fingers twice. A secretary appears “come per magia”): Ehi! Ehi! Qualcuno prende Bronson al telefono!

Or something like that *(events above completely fabricated. Maybe. I hope).

Will Sampson getting all “I’m not CRAZY, but I am a little bit more than pissed off, man!” to Bronson’s ailing Wild Bill Hickok.

While the editing is a tad choppy during the buffalo (er, bison) attacks, the violence is certainly there. But the quick cutting and super-brief shots of carnage aren’t all that shocking compared to Thompson’s later work or even his original cut of Conquest of the Planet of the Apes (which is worth a look for the restored version’s less than family friendly brutality). Still, you’ll likely feel sorry for Crazy Horse as he’s told he’s suddenly less of a man for weeping after his child is killed and is forced to hunt that bleached beastie in order to regain his status. Amusingly enough, he’s both a dead-eye killer to a few people on the way to his encounter with Hickok, but a lousy shot when they face off. Still, that ends up serving the plot because you want to see which man bags the dang thing and how they deal with the others out to send them to Boot Hill.

The film also manages to a bit of a still functioning timepiece if you peep past the genre stereotypes with a wry eye towards today’s headlines. You’re not going to get a true history lesson from this gloomy flick at all, but you may get a chuckle or knowing self-nod going in a few instances when you’ll see things from a few perspectives from the two leads and Warden’s they banter with each other during their trek. That said, between the grim atmosphere, genre blending and overall tone overcome some of the shortcomings and make this at the very least a film worth watching at least once if you’ve never seen it or revisiting a few times if one hasn’t seen it in a while. Oh, and the closing credits add a bit of a poignant touch in reminding you that reality does a number on fantasy every single time. 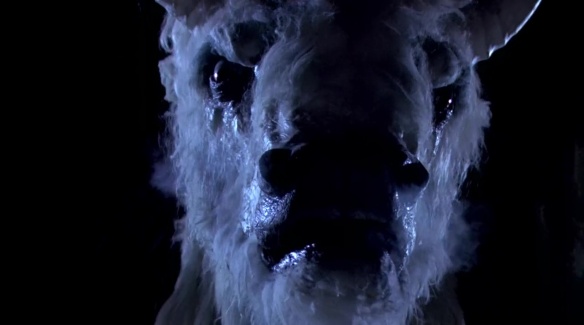 So, it’s kinda glum, yet campy  in a way but not as terrible as one would think? Weird, but that’s no bull. Um, It’s a buffalo, (er, BISON, for the last time!)

Far from Bronson’s worst film, The White Buffalo (Bison!) manages to be a unique take on the western that keeled over at the box office. Maybe too experimental and humorless to some (although there are a few amusing bits if you’re looking for them). but I found it one of those films where you’re wanting every weird idea to work despite the film tripping itself up on occasion by not being epic enough in its ambitions. Eh, give it a rent if you do the streaming thing and see for yourself.

10 thoughts on “(Not So) Random Film of the Week: The White Buffalo”