(thanks, Batman on Film!)

Hoo boy. Based on the internet collapsing in on itself yesterday and today, you’d think someone ran around kneecapping old ladies walking cute puppies or something across all 50 states and in too many countries around the world to count. It seems that this new age of short attention spanned, easily “outraged” fanboys and girls are forgetting their film history a few too many times, so let’s play Time Machine for a bit. Back in 1987 or ’88 when there was NO internet (well, not what we call the internet these days), I can distinctly recall Batman fans I knew flying far off the handle when the Batman movie was announced with a director they’d barely heard of and a guy playing Bruce Wayne/Batman who’d only been known for being a comedian with not so big a movie resume.

I remember reading the news and thinking one word: DISASTER…

Yep, I’ll admit I was really skeptical of the Burton/Keaton combo and some of the other stunt casting. Jack Nicholson as the Joker? Kim Basinger as Vicky Vale? Robert Wuhl (another comedian!) playing an intrepid reporter? Hell, they even roped in Jack Palance to play a mob boss! And wait… Prince was doing songs for the film?? Holy Double-U Tee Eff, Batman! Up until the film opened, I and the folks I hung out with had one eyebrow locked into place in a “Hmmmmm…” mode, even as stills and news from the sets popped up in newspapers, magazines and on TV. Still, we all went on the first day, excited to see the final result and the film had us all from the moment Danny Elfman’s classic theme rumbled through the speakers and sent the chills down everyone’s spines. 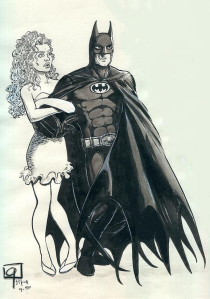 Let’s just say that by the time the film was over, I didn’t hear a single complaint in the theater and I think we even tried to hang around for the final showing of the evening, but got booted out because the lines were stretching around the block even at that hour (we caught an 8PM showing, I believe) and the theater needed to fill up those seats with paying customers. I think I saw the film six or seven more times in a theater, then bought it on VHS and definitely caught it on cable too many times to count since.

Granted, I didn’t like everything about it (the production design outstripped the acting by far and some of the animated effects looked cheap), it hasn’t held up as well over time and Batman Returns was a better and much darker (and very underrated) film. But I definitely had a lot of respect for Micheal Keaton after that and actually had the opportunity to briefly meet the man when of all the crazy things, he was shooting One Good Cop on the block where I was living at the time. A few weeks previously, a small pack of people had descended onto the block and started cleaning out a set of abandoned brownstones and the street around them, making me think there someone had purchased the buildings to convert into housing. It turns out that this was a bit of pre-production for the film shoot, which was pretty cool to see all the way up on 112th Street in Harlem.

The shooting took about four or five days I believe, but Keaton was only there for two, if memory serves me well. I did that artwork above (it’s actually much larger) with intent to give it to him, but thanks to my erratic work schedule, I missed my chance to even leave it with someone minding his small trailer (which was parked across the street from my apartment). That ended up being a good thing in a way, as I didn’t have time to make a copy of the art, so it’s still here and you’re looking at it now. Anyway, I’m rambling on here, so I’ll shut up in a second. I just wanted to make the point that knocking Ben Affleck around and thinking about YEARS after he played a character you didn’t like (not realizing the man has gotten better as an actor and has even directed some stellar films recently – go check out The Town and Argo) is just plain idiot box stuff when all is said and done.

If you want to get mad at something, get mad at REAL world stuff. The increasingly radioactive ocean around Japan (and that’s a BIG deal, kids), the North Pole melting away (BIG deal), all sorts of genocide and wars so forth (not small deals) and so on are stuff you can mass tweet and rant about with the same passion if you prefer to activate more of those brain cells OUTSIDE the fan bubble. Actors ACT. GOOD actors don’t act the same in every part them play. Gigli jokes aside (trust me, I thought up a few when I heard the news, gobble, gobble!). Let the man play the part as best he can and see what happens when the film is done. I’m betting most of you going in whining (or not thinking of going in at all) will come out singing. Or at least ready for a fresh slice of crow pie.