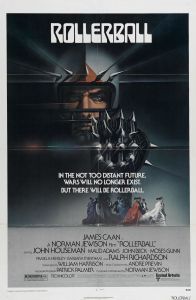 So, I’m looking over the notes for my Prometheus plot dissection (which probably won’t be as critical as my picking apart of The Thing from a few months ago), and that fun GE robot ad pops up. While writing up that last post about it, I got to thinking about a few of my sci-fi flicks that had evil corporations running things unto the ground for the purposes of profit and proving class struggle is a useless pursuit.Oh, what a fun time that was (he said, depressingly).

Norman Jewison’s excellent Rollerball was one of the first films that popped into my head (along with Soylent Green and Logan’s Run in case you’re interested) and amusingly enough, it just so happens to have popped up on cable recently. For the younger crowd out there, stay FAR away from the truly terrible 2001 remake and check out the darker, more violent and surprisingly deep 1975 original. 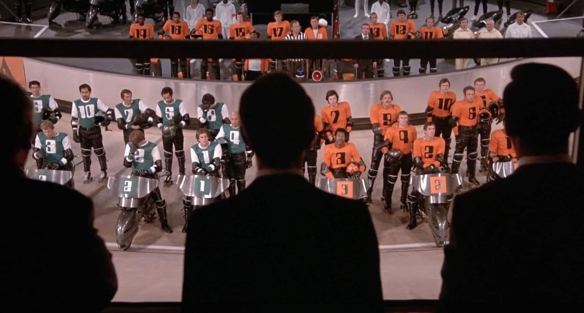 Sure, on the surface it’s a well made action flick that takes the old sport of roller derby, adds spiked gloves, a solid metal ball, motorcycles and a lot of broken bodies to the mix, but pay attention and the film reveals much more. In the movie, Rollerball is a corporate funded sport that’s broadcast worldwide and as the ONLY televised conflict, it also takes the place of armed conflict while doing a great job of pacifying the billions who watch the matches.

James Caan’s Johnathan E. has somehow survived too long in his career as a top Rollerballer for Houston, so it’s decided by the corporation running the sport to edge him into retirement. Of course, Mr. E. has no plans to quit, but the corporation sees him as a threat because of his longevity in a sport designed to have a rather high turnover rate. Let’s just say things go downhill as the game’s rules are changed and things get increasingly brutal until the final match where no penalties and no time limit are in place. 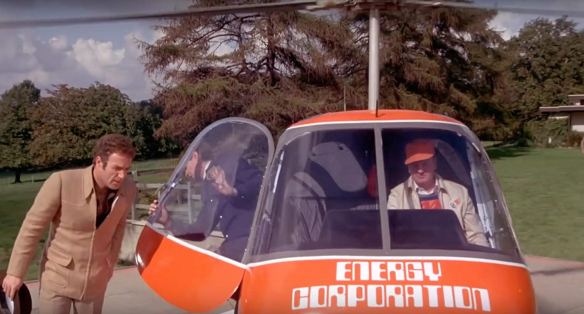 If you’ve only seen the remake (poor you, I say), you know more or less what happens, but of course, the original ends up far superior because the ending manages to be thought provoking, ambiguous and slightly surprising. All the performances here are superb, with Caan’s Johnathan a sort of immoral centerpiece who doesn’t want to quit because he’s too good at the game he loves and knows it. He’s also a bit blind to the real reasons surrounding his forced retirement, but a few nice dialog sequences educate him a bit more fully before the film reaches its conclusion.

John Houseman is stuffy and wonderful as the corporate head, smiling and sharing his pill supply with the Houston players on one hand while plotting to do whatever it takes to have Johnathan die on camera during that final match. John Beck and Moses Gunn also do well here in their roles, but as in Soylent Green, Logan’s Run and a few other of these bleak future flicks, women are basically slinky and decorative objects with not much to do. 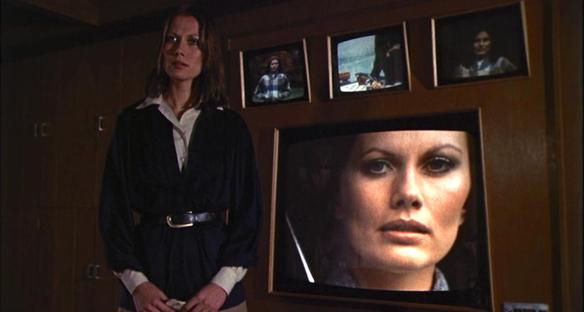 The lone exception is Maud Adams as Ella, who has a past with Johnathan I won’t reveal here as it’s slightly integral to one of the key plot points. The direction and cinematography here is outstanding overall. While all of the violence against other people is presented during the well-shot Rollerball matches (the stuntmen are actually given screen credit), some poor trees are set afire during a party scene that shows how great wealth combined boredom and pharmaceuticals is a pretty lousy combination. Still, those flaming trees represent another key scene in a film packed with memorable moments where the future of sports, war and the mentality of a massive corporate society that considers itself above even the laws it creates to control blend near perfectly. Definitely check it out (and yes, once more – avoid that remake at all costs).

1 thought on “Random Film of the Week (Corporate Edition): Rollerball”