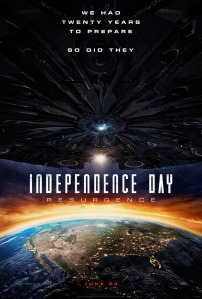 We really didn’t need a sequel to Roland Emmerich’s Independence Day, but one got made anyway. The first film was a big, loud and (at the time) expensive chunk of mindless summer fun that grossed over $800 million at the box office and paved the way for even more mindless blockbusters that featured cardboard characters, paper-thin plots, and more (and questionably “better”) computer generated effects. I liked it enough to see it four times (hey, those visual effects were pretty stunning back then) and later bought it on VHS, lenticular insert card and all.

The 20 years too late sequel, Independence Day: Resurgence ups the ante considerably by making everything bigger, dumber, faster and louder to the point that it’s a mind-numbing, confusing mess from start to finish. Hey, if you like your popcorn movies quite popcorn-y and don’t mind two solid hours of a simplistic yet convoluted plot, by the numbers acting and countless millions (or billions, it’s hard to tell) killed before the end credits, I’m not here to poop on your parade at all.

On the other hand, I want some actual science back in my science fiction. And physics. And something resembling a comprehensible plot that doesn’t insult what little intelligence I have left. None of those are here and the film’s way too cheery ending promising an even bigger and more bombastic third entry ends up dooming this “franchise” to maybe network TV movie or limited series status at best (that is, if someone at Fox has the brains to even think of going that safer route).

Nearly everything in this movie is pretty much a rehash of the original but with far more emphasis on scale on outrageous levels. 20 years after the first film, Earth has unified and rebuilt using the aliens technology to create super weapons used around the planet and in space as defense against a future invasion. Yadda, yadda, yadda… the aliens return, we accidentally shoot down a friendly alien ship with the solution to our troubles and millions (or billions, it’s hard to tell) die as the aliens get to their dirty work. Oddly enough, the film is pretty boring despite all the explosions, chase scenes and visual overkill at every turn.

Instead of a fleet of ships sent around the world, it’s just one too damn big mothership (3000 miles wide or something insane like that) that’s so massive it’s got its own gravitational pull. As shown, the the mere act of entering the atmosphere causes the destruction of what looks like all of Europe as buildings in Asia are yanked up and dropped once movie gravity does its thing. The aliens decide to go the Planet Eater (TM) route this time, using their tech to dig into and leech the earth’s core to fuel their ship or something like that. Meanwhile, the planet’s fate is left to the remains of the earth’s defense forces, a modern day “pirate” ship that happens to be in the right place, some old military equipment and few of the cast of the first film returning for an easy paycheck.

Ugh. As noted, the film dumps so much on your eyes and brain at such a rapid pace that it’s all aural and digital Novocaine. For what it’s worth, the effects are indeed great stuff and while I haven’t seen this in 3D or IMAX (I caught it on HBO on Demand on the 4th), you can see even as a “flat” film it’s made to emphasize both to the fullest. Every big chase or action scene has a last second escape complete with cliffhanger moments where you’re led to think the heroes are in danger. Worse, not even the deaths of certain characters from the original hold an ounce of weight because there’s another big action scene coming right up like a fast food meal eaten too quickly. You’ll figure out fast that anyone not coming back clearly didn’t want to be involved in another sequel most likely because they have better things to do than be stuck in front of a green screen for 9 hours a day.

Hey, I love my occasional big, dumb disaster flicks, but this one’s not very good at all when all is said and done. Irwin Allen movies I can watch all day long and still have room for a bunch of 1950’s “B” invasion classics with room for dessert. Thanks to overkill on a few fronts, most of today’s CG-fueled throwaway films just get on my nerves. Again, I won’t begrudge you of your guilty pleasures, but sometimes a film is so big and bad that it makes one want to wish for that time spent watching it to be returned in some form or another. As awful as Independence Day: Resurgence is, the ending just stinks to high heaven and makes the film worse because we’re told the next movie will take us to that alien planet to finish the fight using all sorts of tech thanks to our new alien pals. Wonderful.

No more for me, thanks – I’ll just stay home and hit myself in the head with a stick or something.