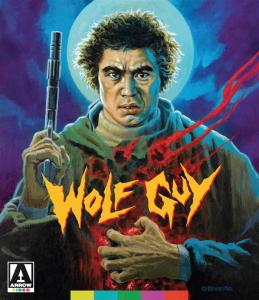 While comic book movies are a dime a dozen these days, it’s a pretty damn expensive enterprise launching one of those overblown popcorn flicks to an increasingly jaded audience. The funny thing is, sometimes the el cheapo route works best in delivering pure bang for a lot less bucks. But of course, we’re stuck in the era of major studios refusing to do anything on a small scale without wrecking it with interference of some sort by throwing either too much or not enough money into marketing depending on the project’s potential.

Which is kind of why Wolf Guy makes for such a stupidly thrilling alternative to the current Hollywood template. Japanese film studios had been adapting all sorts of manga for years, so Kazuhiko Yamaguchi’s 1975 film isn’t all that special. In fact, it never rises above pure exploitation fodder where you flip your brain off and hang on for dear life. But the over the top (in-camera) gore effects, copious nudity, and totally bizarre plot make it a crazed breath of fresh air that’s worth a look. Granted, you’ll want to watch the special features just to get your money’s worth as this film isn’t going to win any awards for making much sense.

That said, this is precisely why this needs to be seen. Shinichi “Sonny” Chiba (The Street Fighter) stars as Akira Inugami, last survivor of an ancient wolf clan (!) who ends up as a modern day detective (!) solving crimes with the aid of his lycanthropic talents (!!!). While your head is spinning around from that, you’ll need to know his current case is one where an invisible tiger spirit called forth by a vengeful singer is literally ripping men to shreds. In the midst of all this, Inugami needs to watch out for government spies who want to experiment on him in order to tap into his werewolf skills for no good.

What follows is 86 minutes of crazed camerawork and crazier somewhat bloody action. Chiba’s trademark Kung Fu gets a workout, there are shootings galore, actual surgical footage gets slapped into a scene, and everything’s just so cheesy that you may find yourself laughing even when the film takes a few dives into melodramatic territory. The reasoning for the singer’s revenge trip (no spoilers here, but it’s a nasty bit of business) is pretty serious stuff. Then again, the film’s general sense of topping itself is almost a relief. Inugami’s run-ins with the J-CIA are pretty intense stuff, particularly when they finally get him in their hands and make with the weird science.

Fortunately, Inugami is invincible under a full moon and even government henchmen bleed cheap stage blood on cue. Or: you can guess what happens for a finale. Yep, this one’s a lightweight and not as stylish as Chiba’s other exploitation film from 1977 (that just so happens to be a new Arrow release). As for those special features, there’s half of an interview with Chiba that’s pretty cool beans, but the one-two punch of director Kazuhiko Yamaguchi and director Kazuhiko Yamaguchi make for two of the more frank features I can recall. Or: don’t expect wistful nostalgia from these two old guys as they really didn’t care much for what’s here.

Is it horror? Sci-fi? the worst Columbo episode ever? A Bizarro World version of Deadpool without the Marvel license? Who cares? It just works. Yeah, yeah, I know, I know. We still have modern indie exploitation flicks galore out there including a lot I’ve seen and liked. But my own nostalgic waxing leans more to this kind of earlier silliness where you don’t even need to pretend you’re going to get anything “important” out of what you’re about to watch and you laugh all the more because of it. Wolf Guy is just pulpy, gory and great, dumb fun as it needs to be.