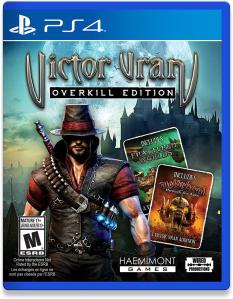 As I’m still in recovery mode after my hospitalization, I’ll be brief with this review/recommendation. In short, Haemimont Games has done an absolutely spectacular job in bringing over its action/RPG Victor Vran to consoles and yes, you should pick this one up if you’re a like-minded chase & chop fanatic. The game’s enhanced content gets it re-titled Victor Vran: Overkill Edition with good reason.

Between the lengthy main quest to save the cursed city of Zagoravia, the randomly generated Fractured Worlds and quirky as hell Motörhead Through the Ages expansions, there’s a LOT of game here for a mere $40. And that doesn’t include the 2-player local co-op, 4-player online co-op, PvP mode or (optional) daily challenges that extend the fun for those who want to dive into a bit of competitive action.

Running at a super smooth 60fps, the game might not look as gloriously detailed as the mighty Diablo III: Reaper of Souls, but Victor’s more action-centric and weapon swapping-based moves make the game stand out. Jumping and wall jumping are in play, as are Destiny Cards that can be equipped in order to enhance skills. While you only get to play as the titular hero, Vic gets some cool unlockable outfits that determine his capabilities. These and many other differences from Diablo III make the game well worth a look. And yes, if you liked The Incredible Adventures of Van Helsing: Extended Edition, you’ll very likely like this even more as despite some similarities, they’re vastly different on the customization and overall sense of humor front.

In terms of the main game’s story, the mix of dramatic and humorous elements thanks to the lead (Doug Cockle) playing it mostly dead serious as The Voice (Andrew Wincott) guides him through assorted perilous territory with a few quips for every occasion. If you rush through the main game, you can expect about 25 or more hours on the easiest difficulty, but this isn’t a walk in the park by any stretch. For example, timed Challenges await in each area that you’ll fail at lower levels, but ace once you’ve earned experience and better gear. You eventually earn that gear as loot drops as the game opens up and you gain access to more gold and cooler weapons, cards and powers.

The Fractured Worlds expansion adds a series of replayable maps that may be described as a take on the sprawling Adventure mode found in Diablo III. It’s more or less a bunch of super-tough maps not for the faint of will. The regular game is hard as hell with packs of enemies charging you from all sides, but things are somewhat manageable if you play smart. That said, the Fractured Worlds maps are meant to kill your character from the get go. Fortunately, you can shift over levels and gear to both this and the Motörhead Through the Ages DLC with no hassles. Or, HINT: go earn some killer gear in the Motörhead DLC and bring it into the main game and FW content.

Speaking of Motörhead, I’m still going through that kooky chunk of DLC, but the mix of offbeat topical political humor from the bizarre (but timely) plot, Troma’s Lloyd Kaufman adding his comedy stylings to the mix (he sounds like a mid-80’s era Mel Brooks as he delivers his lines) and the hard rockin’ tunes all work surprisingly well. I was concerned that it wasn’t going to for a hot minute, but my fears were unjustified. It might not work for some, but anything that makes me chuckle and eye-roll with a smile works for my lowbrow tastes. So yeah, this bonus was (and is) a true thrill. If anything, the job done “porting” this to consoles should be seen as a great example of how this sort of game needs to be done. In other words, go grab a copy when you get the chance.