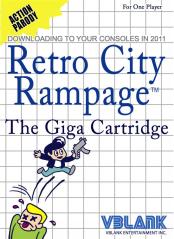 Ironically, one of the best games of the year is a completely retro throwback that would have been one of the best 8-bit games ever made had it been slapped into a cartridge. But it’s not even available on any physical media at all – it’s a download-only game that’s currently a PC and PSN exclusive (that’s also coming to other console platforms soon enough). If you’re well versed in classic gaming and plenty of 80’s and 90’s pop culture history, Retro City Rampage will be one of the best gifts you can give yourself or someone else who’s going to appreciate the megaton count of in-jokes, references and completely off the wall humor the game delivers. The first five minutes will have you hooked, but the amazing thing about RCR is how much it crams into each cut scene and the resulting gameplay chaos that often ensues from the act of merely trying to progress in the often hilarious story mode.

In the game, you’re Player (or The Player), a tough guy looking to make a name for himself in the sprawling city of Theftopolis. Yes, it’s a Grand Theft Auto parody on the surface, but as you’ll soon find out, developer/programmer/artist Brian Provinciano and a small team of about four others (mostly assisting on art and music chores) have made something a lot more special. After a bank heist (modeled after the one in The Dark Knight) goes haywire, you’re booted through a series of fast-paced action set pieces and end up in the home of one Doc Choc (a riff on Doc Brown from the Back to the Future films) who just so happens to need a bit of assistance in collecting parts to get his Delorean time machine running. There’s a lot more here, but the open world allows each player to tackle things at their own pace, so I won’t spoil the fun other than saying you’ll probably be laughing quite a lot (and even more so the better you’re into game history).

When the Solid Snake-like guy sends you on a multi-part mission that plays like parts of Metal Gear, Contra, Jackal and Front Line (among other games) and later, you’re running into the game’s version of the A-Team, the Teenage Mutant Ninja Turtles and other heroes and villains (usually while you’re very much in the middle of doing something else), you have to acknowledge pure genius when you’re seeing it in action. What’s great about the game is it wants you to have as much fun and cause as much mayhem as possible without much in the way of penalties. Raise enough hell by mowing down civilians and the police will rush in guns blazing while trying to run you over with their cars and motorcycles. The nice thing is the game is never frustrating when things go haywire because even if you go out in a blaze of glory, you’ll die laughing.

In addition to Story Mode, you can whip through the timed Arcade Challenges you’ll unlock as you play through the main campaign or tackle Free Roaming Mode, where you can’t save at all, but you can have a total blast raising all sorts of hell. While the elephant in the room is of course, the surface similarities to Rockstar’s GTA games, Provinciano has done such an awesome job of making his game much more than a simple parody that there’s always something hidden (a ton of unlockable character skins, for example) under the surface of even the briefest mission. Controls are excellent on the Vita or PS3, but I played through the game twice on my Vita before touching it on my PS3 because I was having such a blast with the handheld version. If you’re not used to top-down driving, it may take a bit of learning and crashing into things (and cops. And pedestrians), but you’ll get it soon enough.

As you can see from the video, the game looks like a super-colorful NES or Sega Master System game (or like one of those amazing Codemasters Micro Machines J-Carts from the mid-90’s), but you can tweak the video setting to a great degree. Want to play with a Commodore 64 color scheme, that old sickly green Game Boy colors or even on a simulated black & white TV? It’s all here and more. It’s also here where the game deepens its history lesson, as I’m betting there will be plenty of gamers playing this who’ve never heard of half or more of the game consoles and home computers whose visual palettes are emulated here. That quality and dedication to obsessive detail extends to the killer soundtrack which will also keep you grinning if you’re a retro game fanatic.Yes, there IS a soundtrack available and yes indeed, you NEED to be listening to it outside of this fantastic game.

Sure, the lack of a co-op mode in favor of online leaderboards makes this something you can only share with friends through connecting to PSN or checking out the game’s official site. But that’s the only minor complaint I have here. Overall, this is hands-down one of the most fun games I’ve played this year because it’s packed with nostalgia, solid gameplay and manages to be funny as hell. So yeah, if you consider yourself a gamer… GET THIS GAME, as it’s available on a few platforms already (PC, PS3, Vita) and coming to more (Xbox 360, WiiWare) soon enough. Play it once and you’ll be back again and again for more. I think some sort of sequel is in order, but how do you top a game that has too much going for it already? Now, that’s a question I sort of don’t want to know the answer to as the playable results would be even more insanely great than what’s here. Your move, Brian…