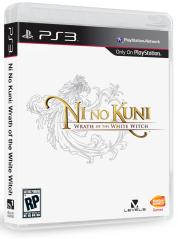 As much as I’m not so crazy about pricey collector’s editions these days, this one’s actually a nice buy for the sole reason it’s got an ACTUAL 300-page hardbound book as part of the deal. Namco Bandai’s Club Namco online shop is the first to offer up this $99.99 pre-order, so definitely book it on over there if you want one, as I expect these to sell out FAST.  The other stuff in the package is pretty cool as well, but it’s absolutely awesome to see Namco Bandai doing a limited edition that has something players can actually use as they play the game that gives them a bit more of an attachment to the main character.

OK, it’s worth a hundred bucks, but it’s still not a PERFECT package for some people. If I had to complain about something, it would be the addition of DLC characters in a single player RPG (what if a gamer doesn’t have/want a PSN account or lives in an area where they can’t access broadband?) and the plain US package art which actually manages to make the import version’s lovely but dull cover look absolutely thrilling in comparison. Anyway, start saving up those pennies or if you have them saved, go grab yourself one of these sets ASAP.