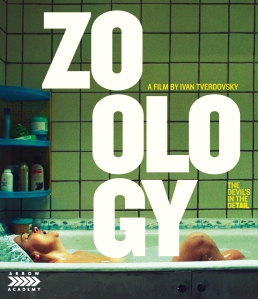 Sometimes, being way, way out of the loop on a film is the best thing that can happen because when you miss all that buzzing and screeching, you get to go in totally cold and be nicely surprised by the results. This is exactly what happened when I finally sat down to watch Ivan I. Tverdovsky’s wonderful, bleak deadpan fantasy Zoology, another solid Arrow Academy release (also available on DVD). This is one of those films with a standout role for a “woman of a certain age” that’s somewhat remarkable until you realize your going into the film with that sort of prejudice might also make you not enjoy it if you think too hard about stuff like that.

Anyway, right off the bat, you’re made to feel sorry for poor Natasha (Natalya Pavlenkova), a sad-looking middle-aged put-upon employee at a dreary Russian zoo. Her somewhat nasty co-workers openly make fun of her frumpy looks and lack of a social life, she lives with her elderly mother and a dying old cat and just as you’re about to throw yourself out the window from the gloom of her daily routine, she faints at work one day and later finds out she’s grown a tail. The doctor she sees sends her off to get an X-ray and Natasha meets radiologist Peter (Dmitriy Groshev), who initially seems nonplussed about her extra appendage. The pair strike up a fast friendship which leads to more, but that’s (almost) all you’re going to get out of me because you kind of need to see how this one plays out.

Tverdovsky shoots in a documentary-like style that lends the film a great sense of reality throughout. Outside of Pavlenkova’s stellar performance, the other main visual effect is Natasha’s tail (which seems to be a prosthetic enhanced with a bit of CGI and/or puppetry in a few shots). Natasha finding her sexy side at her age leads to a few major changes in her formerly drab life, but even at its best, the small seaside town she lives in offers some fairly mundane entertainment options. The great thing about these interludes is the director shows how something as goofy as sliding down a concrete dish in a metal pan can be somewhat of an incredible experience for a woman who’s up until that point had nothing fun happen to her.

Of course, you get the balancing out of things as Natasha ends up on the bad side of her awful employer and fellow workers simply by getting her hair done and some better looking clothes. The irony in these scenes is somewhat priceless because a her co-workers aren’t exactly traffic stoppers – it’s just that Natasha to them is an easy harmless target. She also starts hearing rumors of a devil woman with a tail roaming around the village who can kill with a stare (among other things) and in two fun scenes, wryly engages in conversation with some gabby superstitious ladies while waiting for a doctor’s appointment. The film also pokes fun at medical care run-arounds that never quite solve problems as Natasha keeps getting told she needs more X-rays because one doctor has trouble seeing something he seems not willing to deal with.

While there are some happy moments here, the film also has a steady sense of crushing reality once Natasha’s secret is revealed a few times in public places. The final section is somewhat painful on a few fronts as Natasha’s life as a formerly normal person becomes a burden thanks to her deformity and a decision is made that abruptly ends things. I didn’t find it ambiguous at all because it’s like most acts of desperation and heartbreak where a choice is made for clear reasons that some may not gather as sane. While it’s not the ending you might prefer, it makes perfect sense if you see the bigger picture. In other words, have a nice comedy handy if you need one as a backup plan. I was going to recommend Mark Palansky’s 2006 film Penelope, but that’s a film I didn’t like all that much outside of the makeup work and a few of the performances. But hey, it’s an interesting counterpoint.

That said, I wouldn’t be at all surprised if this gets a Hollywood remake at some point (featuring a few “women of a certain age” in key roles), but we’ll see what happens I guess. For now, stick with the original and keep an eye on whatever Tverdovsky has planned for the future.

Review disc provided by the publisher.