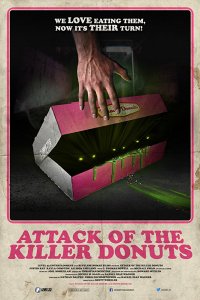 Some of the more jaded folks who whine online about every film they see needing to be some form of “great” won’t appreciate that films like Attack of the Killer Donuts exist at all. But if you’re alright with campy high-calorie horror  packed with intentionally eyeball-rolling humor and the occasional (mild) gross-out gag, this one’s for you, sprinkles and all. That and this is a film that clearly knows its place in the cinematic food chain. You’re getting a well made for its super low budget flick with a cast that’s all in for what it throws at them, a mix of practical and CG effects that get the job done and an overall 80’s vibe that works pretty well despite a few flaws.

Then again, you can’t expect a film that cheerfully rips off elements from Re-Animator and Attack of the Killer Tomatoes to be perfect. But you’ll laugh in the right places for sure if you’re into that sort of gleeful (yet necessary) thievery. Dandy Donuts is already a pretty crappy joint to get terrifically terrible coffee and donuts of reliably questionable quality from. But when their fryer oil is accidentally tainted by a reanimation serum created by a not all there mad scientist, it’s up to Dandy’s two hardest workers, a friend and that mad scientist to put a stop to the murderous pastries. 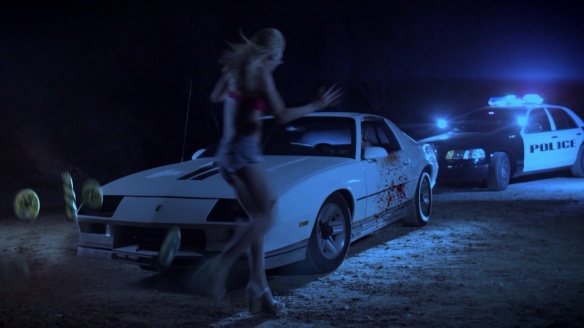 Johnny Wentworth (Justin Ray) lives with his rather hot mom Emma (Kassandra Voyagis) and kind of crazy mad scientist Uncle Luther (Michael Swan). Running late for work one day, Johnny has to retrieve his laptop from his uncle’s clutches, as it’s somehow the same laptop used by the donut shop. Yeah, it’s weird and silly B-movie logic (and Johnny keeps calling it a tablet when it’s not at all), but you have to roll with this flick to get the most out of it. Meanwhile, while working on a reanimation serum in his basement lab, Luther injects a dead rat with it, who springs to life and bites him on the shoulder before briefly escaping. Oddly enough, the film never does anything with this subplot until Luther bursts into Dandy Donuts to get the “tablet” back and gets into a fight with the manager, Cliff (Chris DeChristopher) and a sample of the formula shoots out of his lab coat and lands in that fryer.

Needless to say, Johnny and his co-worker Michelle (Kayla Compton), who secretly has a crush on him, end up making a few batches of tainted treats and even give a few boxes away to a number of victims. One unfortunate is Mrs. Scolari (Alison England) who does a hilariously sexy night at home with the donuts dance when she gets home with her gift. Of course, those donuts take a bite out of her before she can chow down (ouch!). Two cops (C. Thomas Howell, Frederick Burns) get another box, but they offer a prisoner (Vince Royale) in their patrol car one and he ends up turning into a farting, wide-eyed freak that knocks out the two cops and makes good his escape, albeit temporarily. Howell totally chews the scenery here and seems to have enjoyed his part, by the way. 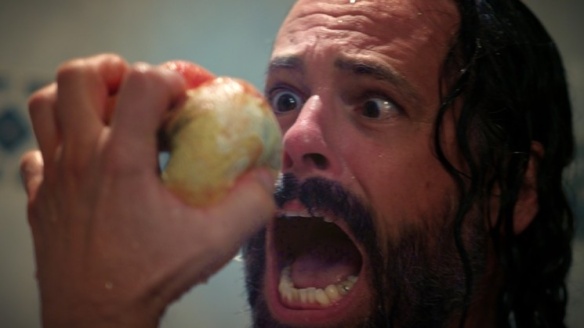 There are also amusing bits set up around a rival donut maven (Michael Rene Walton) and Johnny’s would-be dream girlfriend Veronica (Lauren Compton) who he thinks is in love with him (but is just playing him for the cash he borrows from his mom). But these are more victims set up for the mostly digital donut-related homicides. If you’re a cable TV hound with a sharp eye for character actors, you’ll want to keep an eye peeled for Christine Nguyen and Michael Gaglio in too-brief cameos as a kinky couple who get their just desserts while the husband is spying on Mrs Scolari’s house. There’s a lot of CG used here along with some practical effects, and for the most part they’re fine in a straight to DVD or cable manner.

As far as nudity and gore go, it’s nope on the former and low on the latter. I’m gathering there’s a longer cut with extra effects because some shots cut away from makeup after effects or limit violence to a few blood splatters you can see on a network TV show. But I’d gather director Scott Wheeler is going to potentially get a somewhat splashier sequel of sorts prepped if this does well on VOD and during its limited theatrical release. So, here we are, full circle at the end of this review and craving a nice (and non-killer) donut with freshly brewed coffee. As noted, this isn’t a going to be a major award-winning flick at all. But it does what it does well enough to rate at least a rental if you’re in the mood for a light snack and don’t mind pairing it up with a little more cinematic cheese as an appetizer.

Review screener provided by the distributor