Get ready for one of the most fun games you’ll ever play, folks… 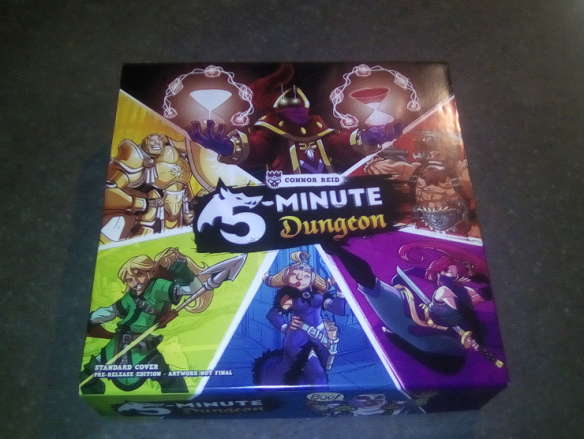 You know a card or board game is going to be a big hit when the only non-gamer who shows up to play wants it as a prize for being the one who “had the MOST fun”. That was one of the hilarious results of my evening with Connor Reid’s wonderfully fun 5-Minute Dungeon, an upcoming Kickstarter project from Ontario, Canada-based game company and two-time Mensa Award winner Wiggles3D scheduled to launch November 1st.

If you’re into any sort of RPG, board games, card games, family fun, and/or friendly all-out mayhem happening on game night (or any night and hey, who said you HAVE to play at night?), keep an eye peeled for this and yep, go drop some cash on your own copy. 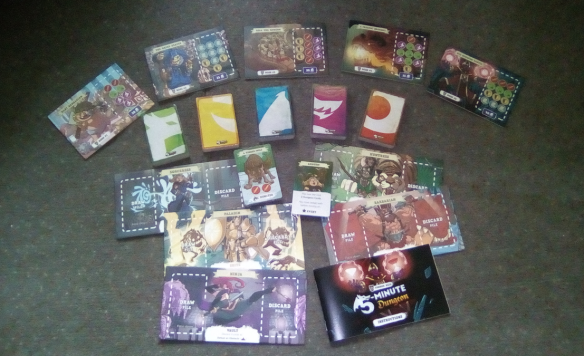 Made for 2-5 players and yes, you can (and NEED to) complete a match in five minutes, 5MD can get pretty frantic as players cooperate to blaze though a dungeon to defeat enemies and take down a boss before time expires. No waiting for turns means each match is a speed-run of attempted coordination as enemies and obstacles are taken down on the way to that big, bad boss waiting at the end. 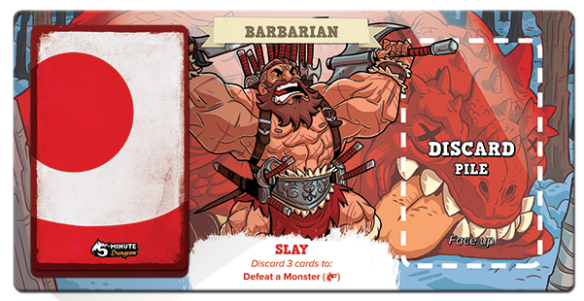 There are ten characters to choose from on five reversible cards (Barbarian/Gladiator, Ranger/Huntress, Wizard/Sorceress, Paladin/Valkyrie, Thief/Ninja) and five bosses total. With no lore, backstory or tons of reading required, 5MD is meant to be dove into without fuss and blazed through until you need to boot people from your place until the next time you set up a session. 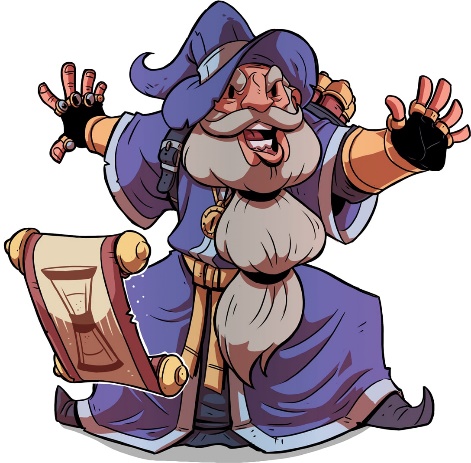 While you can use any old timer from an eggy minute-glass to any old phone counter, the game’s app timer is highly recommended as it’s narrated (your choice of male or female voices) and adds to the fun. 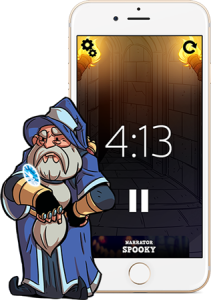 The great things about the game are EASY to pick up and play and it’s not a competitive play deal where you’re going to have people getting annoyed that they got less turns or got beaten by more skilled players. As everyone’s working towards the same goal, the race against the clock is the true test here. Things do get loud and I can very safely say that when it’s a room full of adults, you’ll probably hear some creative swearing every so often as time ticks close to the few seconds left mark.

The most amusing thing about that almost three hour test session was the non-gamer (who was a last-minute addition) who said he wasn’t at all into card games having too much fun and yes, being the loudest guy in the room when all was said and done. No, he didn’t get to take the game home, but he did get a look at part of the press release below after he asked where he could buy the game:

Kickstarter pledges begin at $5, as follows:

Thank you & a print-and-play copy of the game.

Get the game for $10 less than anyone else. Only 500 copies available!

Includes the game, plus all stretch goals unlocked by the campaign

Get both versions of the game for only $50. Keep a copy for yourself and give one away, or keep the collector’s edition wrapped up and play the base game.

I think he’s leaning towards the $25 tier, but I’ll bug him in a few days with a link to the Kickstarter page once it goes live. I don’t think I need to bug any of YOU out there about thus, as it’s a no-brainer that a few of you are excited and want to take this for a spin. Yeah, you know what to do, right? I’ll pop up a fresh post when the campaign starts, but go bookmark the 5MD game page yourself so you get a double reminder to grab this one ASAP.

1 thought on “5-Minute Dungeon: Success Is In The Cards For This Great Hybrid Game”