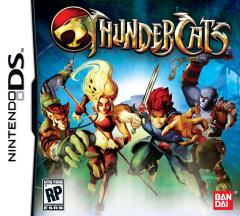 There’s a decidedly old-school mentality to Aspect Digital Entertainment’s Thundercats that makes it somewhat compelling despite its flaws. It’s not innovative in any respect, but doesn’t need to be because it works well enough for what it’s aiming for. Then again, if you’re only looking for a side-scrolling beat-em up with timed stages, colorful but straightforward visuals and a ton of unlockable artwork and music, you’ll appreciate what’s here a great deal more than some snooty critic who demands innovation in every modern game they play. What’s here is fairly simple, definitely not for casual players (trust me, it’s a total ball-buster in parts) and packed with plenty of cheap enemies and bosses. while far from gaming perfection, it’s very reminiscent of plenty of quarter muncher beat-em-ups that crowded arcades in their heyday.

The plot plays things seriously with Lion-O out to avenge a few deaths as he whittles his way to the evil Mumm-Ra (and yes, more than once you must face him), but you’re not buying this for a gripping tale of revenge. If you’ve played any side-scrolling action game in the arcades or on consoles from Altered Beast, Castlevania, Shinobi, Rastan, and so forth and so on, you know the drill: Move left to right, beat up on enemies with a limited move set before that timer runs out unleashing a special attack (“Thundercats, HOOOOOOOO!”) when necessary. Rinse and repeat, but try not to die because you get no mid-game saves nor checkpoints. Thundercats works this formula well enough throughout, but it’s too bad Aspect didn’t copy some of the better arcade beat ’em ups when it came to animating Lion-O.

Sure, he’s got five combat moves, a sliding evade deal that comes in handy when you’re swarmed, and can eventually summon some of his comrades to unleash assorted power or buffing moves (provided you’ve collected at least one Thundercats icon). But the character animation is a bit stiff and jumping can be a pain when ranged enemies join the party. Unlike games with floaty jumping mechanics or those that require pinpoint landings. In Thundercats, you have to kind of guide Lion-O’s vertical lift, which is problematic when there’s a power-up on a ledge. In almost any other side-scrolling platfomer or action game, that double jump you just did would have nabbed it. Here, it feels like extra work to grab an item above you, which is only recommended if there are no enemies within striking distance.

Those Lizardmen and other creatures do a great job of giving you little breathing room and show no mercy at all. Granted, it doesn’t take much work at all to dispatch standard enemies, but snipers, archers and heck, anyone with a ranged attack can whittle Lion-O’s life bar to zero before you even get him close to them because you’ll be juggled while being shot full of lead, lasers, lightning and arrows.  Bosses are all dirty fighters with somewhat predictable patterns that can be slightly frustrating when they take a few hits and start calling in backup while they pop off the screen (for a quick snack or something? I never figured out why).  In most cases, saving up a special attack or ally summon is the best thing to do, but learning how to work that slide move and when to jump over some enemies is a big key to survival.

The nice thing is the game almost constantly rewards you with bonuses (mostly unlockable artwork cards, alternate title screens and such) that are cumulative. So even if you get a Game Over screen, all you’ve earned is saved to the game card’s memory. In terms of presentation, the game looks and sounds fine throughout – again, not “innovative” but nice and solid art and tunes that give off a nostalgic vibe. There are maybe two oddball music tracks that seem out of place at first, but the more you replay these stages, the more they grow on you. There are some still shots from the new cartoon used in brief intro portions to some areas, but the game isn’t trying to be a perfect emulation of the series at all.Of course, in a perfect world, we’d see this game expanded in an HD format, tightened up even more and released on PSN for the Vita, but that’s big fat wishful thinking on my part, especially given a few factors such as development costs and risks involved with a niche genre (and a licensed game at that)..

At the end of the day, Thundercats is an OK game that’s going to appeal to a certain type of gamer and/or die-hard fan of the show  and probably not too many others. It is what it is – a modern licensed game trying to be an older classic (or not so classic) game. Some of what was tried works, some doesn’t. That’s the way it goes with all games and I rather appreciated that Aspect ended up making a game that’s going to be enjoyed by those who happen to like stuff like this. Hey, your reflexes will certainly get a hardcore workout, that’s for sure…