Here’s the simple but effective cover art for DmC on the PS3 and Xbox 360 plus a fun little surprise you’ll never ever see as an actual product unless someone invents time travel. Or maybe thinks of this stuff BEFORE a game gets made. In the blog post over at Capcom Unity, there’s a joke picture of a Sega Genesis version of the game labeled “coming never” (ha, ha) that, while hilarious for a hot minute, got me thinking a bit creatively (and yes, I’m here to help, Capcom). Make it so, guys! Hell, you should have thought of this funky idea while the game was in development as it would have been an AWESOME bonus on the disc (or, as a bit of {ugh} free DLC or pre-order content over PSN or XBLA).

In a perfect world, you’d have gotten WayForward Technologies or some other developer who loves doing quality 2D side-scrollers to come up with a side-story for the game (with an assist from Ninja Theory, of course) and made a nice retro-style instant classic that could have had at least two playable characters (I’ll leave it to you to guess who). It didn’t need to be a long game by any stretch of the imagination (five, maybe six stages with a few bosses), but imagine how much better that new look for Dante would have gone over had you planned a nice little treat for fans like this? 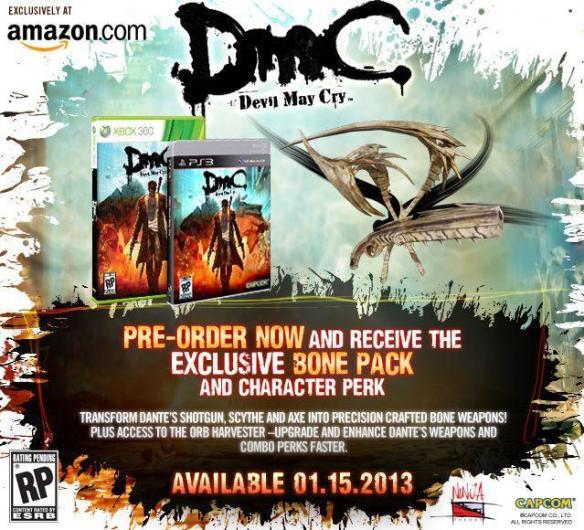 Anyway, here’s the pre-order info from Amazon (weapons and a character perk) if you want it. You can also grab the game directly from Capcom’s online shop if you want to chop out the middleman and support the company a bit more directly. The game itself hits retail on January 15, 2013. You also may want to buy an extra controller or two, as it’s definitely quite hardcore in a few very welcome spots.