So, it was my birthday last month, but I don’t celebrate it these days like “normal” people do. I tend to just wake up and be thrilled to be breathing, move on and let a new year pass hopefully without any bad stuff occurring. Cake is optional these days (Hey, diet? You doing OK?). I also don’t do presents unless I get surprised with one, but this year, I decided to pick up a few things for myself with a bit of extra money I had left over. A little retail therapy, if you like. It’s been quite a year or few years, is all I’ll say about that. Anyway, here’s a small list of what I got myself: 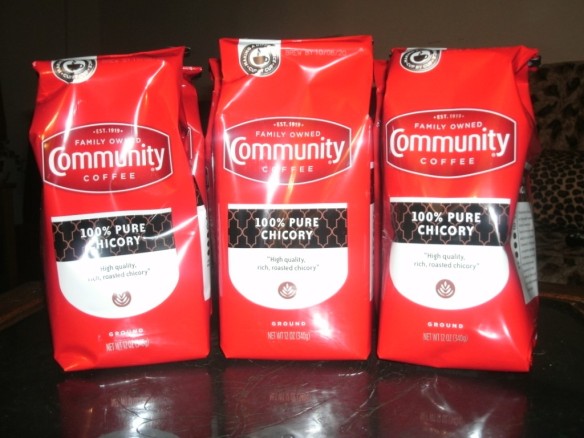 “I can stop anytime I want to…”

I wanted to cut back on the caffeine and someone suggested trying mixing chicory with coffee, so I went with Community’s 100% chicory, as I have a few large canisters of coffee here and I like experimenting when I get the chance to do so. Finding the correct mixture for my tastes was an interesting thing as well, but I did try a pot of pure chicory first but found it a bit too strong. Well, that was my fault, but it did remind me of some of my first attempts to make coffee some decades back where one person liked it and another had her eyeballs practically leave her skull. Let’s just say I got a lot better at the making coffee thing since then. 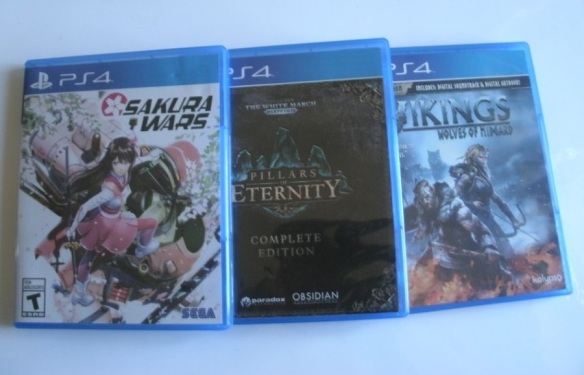 My backlog got a bit larger, and that’s just a few of the physical titles added to the long list.

Sometimes I’ll buy a game outright and not wait for a review code or buy an older game when its dropped in price if it’s a gene I like but never got to review it. For me, a few games have an “evergreen” quality that exists past a review state where a sort of blockbuster weekend seems to be the way a few reviews seem focuses more than a “Hey, does this game still hold up?” after a set period of time has passed. Anyway, I bought Sakura Wars outright because I really wanted a physical version over a review code. Pillars of Eternity and Vikings – Wolves of Midgard were older games I’ve wanted to play for a while and finally as new/sealed inexpensive versions.

I also picked up a few digital only titles like the brutal indie Kings of Lorn: The Fall of Ebris (review incoming!), a few Kemco RPGs that were on sale on PSN (I’ll get to those soon as well). I may get Katana Kami as well, as a physical edition wasn’t released in the US, but I accidentally downloaded the free DLC last month and don’t want it to go to waste. Well, that and it’s a fresh take on an old series I liked and I want to see how this new one plays out.

Not a bad controller for the price, if you search around and get it cheaper than retail.

I like wired controllers because they don’t need charging and sometimes you just want to play a game and NOT need to worry about misplaced cables or a controller giving up the ghost at the most inopportune moments. I was poking around on eBay and saw this Mpow Wired Gaming Controller and for about $30 and bought one to try out. It’s got more of an Xbox-style offset stick layout, but is a very decent gamepad overall, working on PS4, PS3 and Android devices, complete with a headphone jack and turbo functions if needed. The caveats for the lazy are the HOME button won’t turn the console on like the stock Sony controller will and the lighted buttons don’t match the colors of the PS4 pad (if you use those colors to identify buttons, this may be an issue). 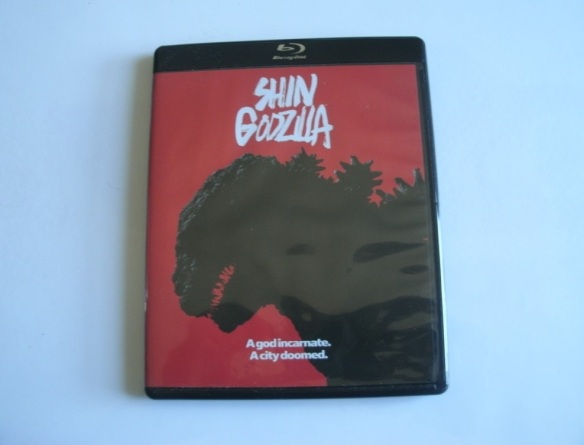 This one’s quite the hybrid film…

As for movies, I only bought one (er, so far): 2016’s Shin Godzilla, as I’d not seen it before and it’s been a film I’d wanted to see for a while. Well, that and the US-made films have been just OK even though they’re building up steam to a sort of major showdown that seems to be heading to a Destroy All Monsters! style update with a few tens of millions dollars of CGI effects in the future. Meanwhile, Hideaki Anno and Shinji Higuchi cooked up a disturbing yet somewhat amusing satire/psuedo documentary that takes the classic kaiju character and reintroduces it as a constantly mutating creature that’s too powerful, yet it needs to rest in order to recharge its power. We see government bureaucracy and power-jockeying in action through the constant meetings held as Godzilla slowly rampages and recharges, and the film often resembles a live-action anime in that some scenes feel as if they’re composed of manga panels that tell the narrative. The film is paced to be talky, yet urgent as the Japan tries to deal with 400 feet of nuclear-powered doom, and that ending manages to ask some pretty burning questions if Toho ever gets the chance to to a proper follow up.