I rather liked science class as lot as a kid despite running into a few bumps in the road, literal warts and all. I recall almost no one wanting to dissect those pickled frogs that the teacher placed on each lab table one fine day, save for two guys in the back (why are the shady ones always in the back and equipped with sharp knives now?) who I guess either turned out later to be really good doctors or even better serial killers later on in life. That and there were a couple of too gleeful girls who obviously didn’t believe that kissing a very dead frog would generate a very dead prince or a live one, for that matter. They just wanted to gross out those that spied them doing it, Ewww.

The more amusing thing here was those girls otherwise hated the class except for this one time and a few other incidents where mayhem was a potential outcome. There was the one time they (about a year later), along with one of the two boys from the back ‘accidentally’ created ammonia gas in the lab that cleared the whole floor, eventually leading to school being dismissed for the day, whee. Uh, don’t try that trick at home, by the way. It’ll the be the perfect cure for everything that ails you with the very obnoxious little side effect of a bit of invisible but acrid smelling poisonous death (and neither a fine nor noble death at that).

Eventually, during the two days, I caved into the learning process and with a fellow equally skittish student (we were all paired up in the class – less dead frogs means a sharing moment for all), we took the plunge. Yes, I thought of all those company-farmed frogs taking a plunge one fine day for a final swim they didn’t know would have them a few hundred miles away dead, well-preserved and soon to be splayed out like ghastly centerfolds courtesy of class-provided scissors and scalpels. My partner in (non) crime was a girl who mentioned before we cut into the preserved formerly ribbiting animal that she had frog once for dinner and yes, it tasted like chicken.

At that point, I was probably even more terrified of her mentioning this than the poor dead frog on its tray waiting to be dissected, double X’s for eyes and all. But many years later, well, I found out that taste part was kind of true. Hey, it was a professional culinary experiment and when you get that opportunity, well, you jump at the chance. Er, so to speak. I also had eel and alligator that same meal, and if I must go under the heat lamps for a spell, everything was pretty tasty, sorry! I passed on the snails, by the way. 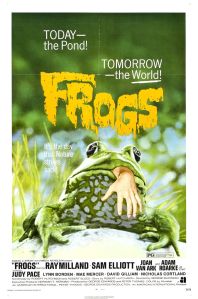 The scariest thing for the shortest time in 1972 for a hot second.

Meanwhile, back at the original memory, I recall the clean chemical smell (was it formaldehyde?) and how hard it was to get into the project initially. But one’s curiosity goes a longer way (as it should), so the deed was done. If there was and is an amphibian afterlife, maybe some froggy deities would either be mostly pleased or purely, inexorably and terribly angered at this and appear (Cthulhu like, now that I think about it), then doom us all to the terrifying cosmic rage of Thl’tepathath or some-thing like that. “Be afraid. Be very afraid.“

When I think back to it, after the experience, I was a bit more upset than usual, scientific approach or not. So much so that when the horror movie FROGS popped up in theaters way back when, its poster made me a tad (pole)… jumpy. Granted, when it landed on TV a few years later, I finally saw it and pretty much laughed through the entire experience, despite the ending creeping my younger self out. Gooseflesh from all those warts I guess. Or maybe it was too many closeups of Ray Milland? There’s a Lost Weekend in figuring that out, I suppose.

Speaking of formaldehyde and old people, let’s talk about coffee for a second. Weird segue, but roll with it, please. Back in the 80’s there was a rumor that Sanka decaffeinated coffee was made with the chemical and some at the time were making the odd connection that old people were imbibing a beverage that was slowly killing them or some such folderol (sorry, it’s an old people word like poppycock and sheep-dip* and the like, and I like old people words, being somewhat older now and closer to old people territory). Interestingly enough, an applied bit of science shows the rumor was a teeny-tiny bit true, but only that the chemical was used in the processing of the product and not the idiotic conspiracy theory part about old people (or anyone else) slowly being intentionally killed and all.

Still, the process isn’t without its risks, especially in one buys those budget brands on the shelves over more pricey water decafs. But such are the risks one calculates against one’s budget, I suppose. Nevertheless, I do need to quit drinking coffee and move to chicory as a substitute by the way. But as you hardcore coffee fiends can imagine, that talented monkey on the horse kicks me in the head hard a few times and I get all Brokeback Mountain for the legal bean. That said, the old blood pressure may be tapping me on the shoulder here with a big megaphone in hand, so I’ll stick with listening to the internal science happening more than the monkey on my back.

Then again, pretty much everything that’s good or bad for us seems has its helps and hazards when you look at things closely enough.  After all this time on this ball, that’s turning into less of a ball, I’d say the key to enjoyment lies with more moderation and less paranoia. However, a touch of “Pusherman“ is the will of the day for most of us stuck on something that frankly speaking, just feels like the best thing in the world, or feels like the worst, but still feels best because we’re too human and all.

To Be Continued (as the internet is very sloooooow today and I need to explain the part of the title in commas, as I bet there’s some scratching of heads going on)…

(*When I was a kid, the term “sheep dip” was used by some older folks as another term for BS, but I also recall Log Gossett, Jr. using it in a TV movie I forget the name of as a nifty substitute for that word as well.)