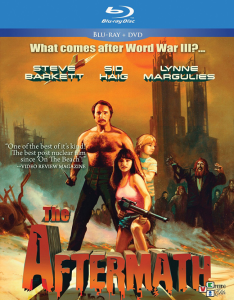 There’s a great bonus on the BR/DVD version of The Aftermath that’s well worth watching before you see the main event. That would be the 1973 student film, The Night Caller, directed by Dan Gilbert and inspired by Ray Bradbury’s short story, Night Call, Collect. The same guy who co-wrote and stars in that main event, Steve Burkett, also plays the lead in this short and it seems the plot is something of an expansion of a few ideas from the short as well as some of Burkett and co-writer Stanley Livingston’s own work.

That said, this shot in 1978/released in 1982 film was also something of a passion project for Burkett, as it was made for not a whole lot of money (and it shows), features a few of Burkett’s friends and family members along with the always fun to watch Sid Haig as the film’s main, mean villain. On one hand, it’s not the greatest action film you’ll ever see. However, it’s a case of a killer “B” flick with an oddly effective sting that happens to wear its battered heart on its bloody sleeve.

Burkett plays Newman, an astronaut returning to Earth after a lengthy journey with two others, Mathews (Larry Latham) and Williams (Jim Danforth!). They can’t contact anyone on the planet and after an explosion, the ship crash lands in the water somewhere near Los Angeles. Williams is killed and initially, Newman thinks he’s the sole survivor until Mathews washes up shortly thereafter. The men spend a harsh night outdoors where they’re attacked by crazed and somewhat violent (zombie-like?) mutated savages and it’s only when the dawn breaks they find out there’s been a big ol’ nuclear war while the men were away that’s wiped out a good chunk of humanity.  So much for that homecoming parade, right?

We soon find out that there’s a crew of very evil (and non-mutated) men led by Cutter (Haig) who round up survivors only to kill the men and boys and keep the women for their pleasure. Newman and Mathews find shelter in a mansion they fix up and although Mathews wants to stay put, Newman’s sense of exploration kicks in and he decides to hit the destroyed city for supplies and just to walkabout and check out the sights (well, sort of). He ends up finding shelter in a museum as an acid rain storm strikes and it’s here he meets the curator (Forrest J. Ackerman!) and a kid named Chris (Christopher Barkett, the director’s son). The curator dies shortly afterward from what seems to be radiation poisoning, so Newman adopts Chris and starts teaching him survival skills.

The pair eventually meet up with Sarah (Lynne Marguiles), who’s escaped from Cutter’s clutches and initially thinks Newman is one of his men. That turns out to not be true and yes indeed, the former spaceman shoots and scores with Sarah. Just when you think you’re getting a post-nuclear family vibe, it’s up to Newman, Sarah, and Mathews to try and free a few more survivors from Cutter’s men. The film’s got a few pacing and logic flaws that kick it around a bit such as the decision not to go after Cutter after his camp is decimated and the rather silly means on non-security at the mansion. But on a purely “look what I made!” level of pride, there’s something to be said for the hand-crafted physical effects from gore to matte paintings to fake museum pieces shot to look much larger than they actually were.

As awkward as it comes off, I actually found  myself enjoying the film even when I was chuckling at its mistakes. Warts and all, Burkett made the film he wanted to make the way he wanted to make it and on that level it actually works. Granted, the back of the case referencing both Planet of the Apes and The Road Warrior is eyebrow-raising at best. But you can see the slight similarities if you’re willing to look for them. Burkett’s everyman ‘dad body’ and circa 1978 ‘stache won’t make you toss aside that copy of Conan the Barbarian, but he gets props for going all out. Hell, the man did his own stunts and you have to appreciate that sort of gung-ho attitude. Hey, I stub my toe on a chair here and I’m curled up in a fetal position for the better part of a week. Of course I’d say my best stunt work involves waking up still living each morning, so there’s that.

Anyway, VCI’s 2K transfer is solid and if you get the Blu-Ray/DVD combo, you can slide one version to a friend and see what happens. Hopefully, the intended recipient won’t sling it back like a Frisbee (or something out of I Come in Peace or Without Warning). You’ll also get a director’s commentary, the Laserdisc version’s special features, the John Morgan soundtrack and a few other goodies on the discs. Granted, the more jaded readers or those who solely rely on tomato sites and other internet driven popularity scenesters might not like what’s here much if at all. But, I’d bet dime if it came to put up or shut up time, some of these wags wouldn’t even dare to make their own movie and if they did, it might not be as memorably offbeat as what’s here.

Review discs provided by the publisher

1 thought on “Blu-Ray/DVD Review: The Aftermath”