Yeah, yeah. I’m still alive. I’ve been in a bit of a personal and creative funk for a few key reasons, some of which are health related with the rest fall squarely into the Nunya Bizness section of the classifieds. In any event, watching the news has been detrimental to my mental, but it’s a case of not knowing what’s going on is far worse than shoving one’s head into the sand. The problem here is the too smart for their own good “political junkies” posing as journalists tend to treat this all as a big, fun horse race crossed with story time and it’s a failure of  insane proportions because no one seems to want to interrupt that yakky daily narrative and let all the shoes that need to drop do so when the appropriate truths are revealed.

In the meantime, I’ve been dipping into my Blu-Ray and DVD backlog when I’m not gaming or too depressed after watching the latest soliloquy from some news show hosts who’d make perfect babysitters because after 20 minutes of them blathering away on some otherwise well-written preamble, I’m ready for a nap. Anyway, enough perambulating around myself – let’s go to the movies! 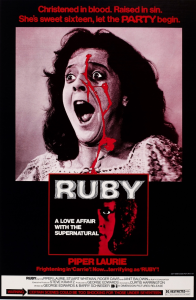 Ruby – Not to be confused with Abby (which NEEDS a full on restoration one of these days!), this interesting but flawed Piper Laurie vehicle is an odd bird that combines supernatural revenge horror elements. mild gore and a bit of demonic possession lifted from The Exorcist, albeit not all that well. Curtis Harrington’s 1977 flick does have its moments, but you’ll need to tap yourself on the skull with a small hammer when the film starts going off the rails with the plot contrivances.

VCI’s restoration job is decent but not flawless (kind of like the film) and the Blu-Ray/DVD combo means you can keep one disc in that old player you’ve kept around just in case you need it. What, you don’t own a second disc player? Eh, whatever. Just pretend you do for my sake. Or hell, you can give a friend one and keep the other unless you just buy the plain DVD release if you’re that stingy.  Either way, VCI will be happy. 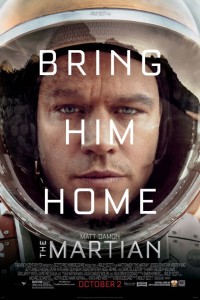 The Martian – We’re NOT going to Mars, folks. Well, at least we’re not going to be sending people up there within the next century who’ll come back alive. As much as I liked the book and this well-made Ridley Scott film, both place so much faith in the perfect coincidence of horrible accidents happening that can be rectified with duct tape, fire and creative use of human waste that one’s suspension of disbelief gets dislocated if one happens to know a lucky streak as shown here is somewhat unlikely (on Mars, at least). Still, it’s a fairly thrilling mainstream movie with a likable cast if you like your sci-fi filled with pretty people making grimace faces when they make big decisions.

That said, as I saw this on disc after the wretched mess that was Alien Covenant, I certainly laughed my fool ass off when Astronaut Mark Watney (Matt Damon) said he was going to “science the shit” out of of a particularly potato-y problem. Dude would have been too damn smart to be on the Covenant, that’s for sure. That film was riddled with stupid people doing stupid things for the sake of plot advancement, even besting the dumb pair of Fifield and Milburn in the less flawed Prometheus. I still think one tiny whiny reason Blade Runner 2049 didn’t do so well at the box office was perhaps some viewers thought Scott having a small hand in that big pie meant it was going to be as flawed and janky as that Alien flick. But I’m probably overthinking this. Still, we’re not going to Mars anytime soon, no matter how much some wealthy folks with money to burn on sending their own rockets up want us to. I’ll bet a shiny new penny on this. 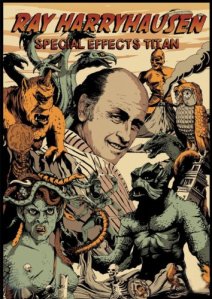 Ray Harryhausen: Special Effects Titan – Very straightforward look at the stop motion master and a fantastic companion piece to the absolutely splendid (but UK-only) Ray Harryhausen: The Early Years Collection. While this documentary does a bit of time jumping in its presentation, it’s a solid look at the man and his life’s work. Also, getting to hear snippets of Bernard Herrman’s scores to some of these films is always a plus.

I’m of the mind that Ray’s work isn’t much appreciated these days by the younger CGI-reared generation who doesn’t watch TCM or have adults around to fansplain their love for his hand-made hard work. Thankfully, his films always seem to be getting back in circulation thanks to a few fine publishers. I don’t have a personal favorite Harryhausen film, but if pressed, either The 7th Voyage of Sinbad, Jason and the Argonauts, Earth vs The Flying Saucers or 20 Million Miles to Earth pop up as must-see essentials. Then again, The Beast From 20,000 Fathoms, Mysterious Island and The Valley of Gwangi are also fun and man, I hate making “best” lists, grrrr! 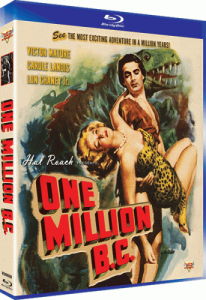 One Million B.C. – Not to be confused with One Million Years B.C.(which, co-ink-i-den-tally also has visual effects by Ray Harryhausen), this 1940 film is a weird watch on a few fronts. You’ll have to try and see it with a fresh eye as if you’ve time traveled to that year and don’t mind the not having a cellphone handy to brag to your pals about how cheap your movie ticket and concession food were. In context, this film is a total hoot because it tries to take itself too seriously and it’s clear that directors Hal Roach and Hal Roach Jr. wanted to make a spectacle of epic proportions (and in fact, did).

Well, that may have worked back in 1940, but the film has not much of a leg to stand on today as anything other than a former TV staple turned into a semi-obscurity that’s gotten a nice Blu-Ray release. As a kid, this was thrilling stuff each time it aired, but seeing it now mind of made my skin crawl thanks to the lizard abuse scenes where dolled up faux dinosaurs get mutilated in the name of selling tickets to the rubes. Sure, it’s a case of “Well, that’s showbiz, pal!” taken to extremes, but it’s also a case of like it or hate it entertainment that sort of reminded me of how otherwise good intentions in the past can make some films almost too hard to watch today. Eh, it is what it is and that’s the unfortunate manner of most history, isn’t it? 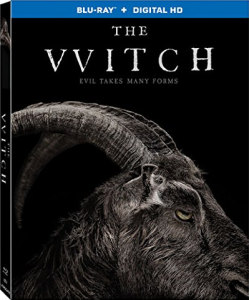 The VVitch – Speaking of unfortunate, this absolutely terrifying masterwork of a film from 2015 got slammed hard by some who either didn’t get it at all or just see modern horror films as generic yet gimmicky chase and chop jump-scare filled pablum with the usual cast of assorted victim cypher types going through the “see all the film in the trailer” motions.

Writer/Director Robert Eggers is having none of that, thank you much. His New England Folktale works brilliantly from the first shot until the last, effectively setting a time and place so well that once you’re dialed in, you’ll be under a blanket, eyes glued to the screen. Yes, the authentic accents and dialog may be too much for some (a reason to re-watch, I say), but the film makes the most of both simplicity and complexity in equal measure. If you’re young-ish, watch it with someone older for perspective, or at least have someone around to discuss anything you didn’t “get” (although everything you need to know is presented right in your face).  Yes, I’m recommending you watch a scary film with an open mind (because it makes it more frightening… who’da thunk it?). 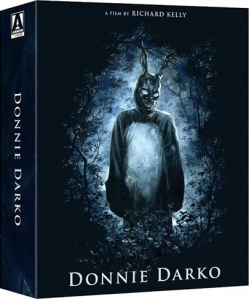 Donnie Darko – After watching both versions of this film in the Limited Edition set and yes, getting the lore and such, I’m still not convinced I liked this sci–fi/mystery/horror(?) film all that much. I don’t know exactly why, but it’s probably my having not so nostalgic thoughts of the 80’s (having lived through them) and this film trying its level best to recreate that feeling and doing a decent job of it. Too decent, in my opinion. It’s certainly one of the most impressive debut films of the 90’s – a Citizen Kane of strangeness, if you will. It’s also a great “pay attention” flick, and works as a very odd superhero film if you look at the big picture.

Still, it’s not for all tastes, but try telling that to those obsessed with it and its somewhat offshoot kissing cousin, Stranger Things and its even more referential treatment of the era. That said, if you want a set packed with bonus features to choke a horse or a guy in a rabbit suit on, Arrow Video want and pulled out all the stops with one of its best sets this year.  The funny thing here is the lousy sequel makes for a poor follow up, but I can imagine a sort of mash-up where M. Night Shyamalan takes elements of this and drops it into his own superhero universe kicked off with Unbreakable and reborn in the quirky, crazy quasi-horror flick from last year, Split. Well, one can dream, can’t one?

Okay, let me shut up here and post this with the promise to pop back in at some point (let’s say Friday) with a few more flicks that kept me company (and sane, I guess) while things were getting bumpy outside.