My big-ass backlog has kept me from updating these Arrow release lists, but the next few months of Blu-Ray/DVD’s coming are looking really phenomenal. A few reviews of the October lineup are incoming here, so stay tuned. In the meantime, check out what’s coming soon to empty out your wallet:

From the mind of celebrated horror author Stephen King, the man behind such classic terror tales as The Shining, Carrie and It, comes one of his most chilling offerings yet – Children of the Corn.

A young couple on a road trip find themselves lost in the back roads of rural Nebraska, eventually winding up in the seemingly abandoned town of Gatlin. But the town is far from empty – as the pair soon discover, it’s inhabited by a twisted cult of murderous children thirsty for another blood sacrifice…

Adapted from King’s eponymous short story first published in 1977 and starring Linda Hamilton (The Terminator), Children of the Corn has gone on to spawn one of the most enduring horror franchises of all time.

In the wake of the success of Dario Argento’s ground-breaking giallo The Bird with the Crystal Plumage, numerous other directors stepped forward to try their hand at these lurid murder-mysteries. At the forefront was Sergio Martino (The Strange Vice of Mrs. Wardh, Torso), whose sensual 70s thrillers starring Edwige Fenech and George Hilton are widely celebrated as some of the best the genre has to offer.

The final of Martino’s six gialli, The Suspicious Death of a Minor combines conventional giallo trappings with elements of the then flourishing ‘poliziotteschi’ crime thrillers. Claudio Cassinelli (What Have They Done to Your Daughters?) stars as undercover cop Paolo Germi, on the trail of a Milanese criminal outfit following the brutal murder of an underage prostitute. But a killer-for-hire is also on the prowl, bumping off witnesses before they have a chance to talk…

Also starring Mel Ferrer (Nightmare City), Barbara Magnolfi (Suspiria) and Jenny Tamburi (The Psychic), and featuring a script by veteran giallo writer Ernesto Gastaldi (All the Colors of the Dark, Death Walks at Midnight), this unique and lesser-known entry in Martino’s filmography serves as an essential link between two different movements in Italian popular cinema. 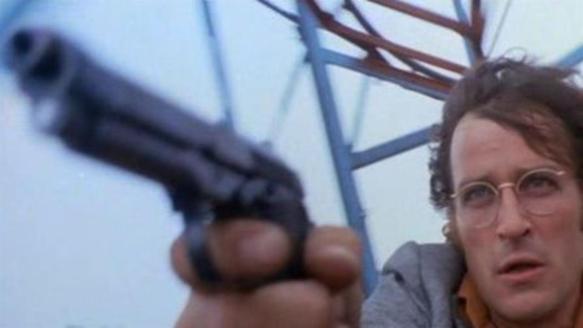 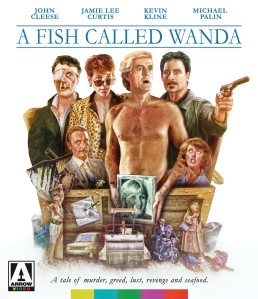 In 1988, John Cleese, former Python and the mastermind behind Fawlty Towers, teamed up with the veteran Ealing Comedy director Charles Crichton (The Lavender Hill Mob) to produce another classic of British comedy.

Cleese plays Archie Leach, a weak-willed barrister who finds himself embroiled with a quartet of ill-matched jewel thieves – two American con artists played by Jamie Lee Curtis and Kevin Kline, Michael Palin’s animal-loving hitman and London gangster Tom Georgeson – when Georgeson is arrested. Only he and Palin know the whereabouts of the diamonds, prompting plenty of farce and in-fighting as well as some embarrassing nudity and the unfortunate demise of some innocent pooches…

Nominated for three Academy Awards and winning one for Kline’s outstanding supporting turn as the psychopathic Otto, A Fish Called Wanda has stood the test of time, earning its rightful place among its creators’ remarkable comedy pedigree.

FIRST PRESSING ONLY: Booklet featuring writing on the film by Sophie Monks Kaufman 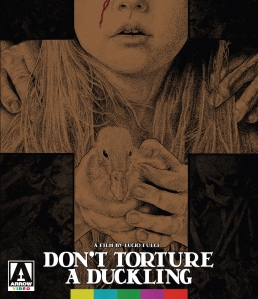 From Lucio Fulci, the “godfather of gore“ (The Psychic, The Beyond), comes one of the most powerful and unsettling giallo thrillers ever produced: his 1972 masterpiece Don’t Torture a Duckling.

When the sleepy rural village of Accendura is rocked by a series of murders of young boys, the superstitious locals are quick to apportion blame, with the suspects including the local “witch”, Maciara (Florinda Bolkan, A Lizard in a Woman’s Skin). With the bodies piling up and the community gripped by panic and a thirst for bloody vengeance, two outsiders – city journalist Andrea (Tomas Milian, The Four of the Apocalypse) and spoiled rich girl Patrizia (Barbara Bouchet, The Red Queen Kills Seven Times) – team up to crack the case. But before the mystery is solved, more blood will have been spilled, and not all of it belonging to innocents…

Deemed shocking at the time for its brutal violence, depiction of the Catholic Church and themes of child murder and pedophilia, Don’t Torture a Duckling is widely regarded today as Fulci’s greatest film, rivaling the best of his close rival Dario Argento. Arrow Video is proud to present this uniquely chilling film in its North American high definition debut.

The filmography of late movie maverick Herschell Gordon Lewis brims with the mad, macabre, and just downright bizarre. But perhaps the most unhinged of all his directorial efforts, and certainly the most influential, must surely be his original gore-fest Blood Feast – the first ever splatter movie.

Dorothy Fremont is looking to throw a party unlike any other, and she gets just that when she hires the decidedly sinister Fuad Ramses to cater the event. Promising to provide her guests with an authentic Egyptian feast, Ramses promptly sets about acquiring the necessary ingredients – the body parts of nubile young women!

Featuring a host of stomach-churning gore gags including the infamous tongue sequence and much more nastiness besides, Herschell Gordon Lewis’ Blood Feast more than lives up to its name and remains essential viewing for any self-respecting splatter fan. 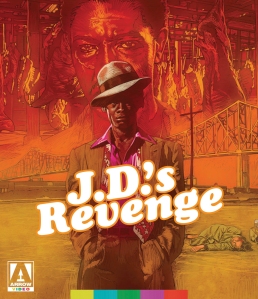 It wasn’t long before the Blaxploitation boom moved into the horror market, bringing the world Blacula, Blackenstein, Abby (Blaxploitation’s The Exorcist) and cult favorite J.D.’s Revenge.

Law student Ike is enjoying a night on the town with his friends when his life changes dramatically. Taking part in a nightclub hypnosis act, he becomes possessed with the spirit of a violent gangster murdered in the 1940s. Believing himself to be the reincarnation of murderous J.D., Ike launches a revenge campaign against those who had done ‘him’ wrong all those years ago…

Directed by Arthur Marks (Bucktown, Friday Foster) and starring Glynn Turman (Cooley High) and Academy Award-winner Louis Gossett Jr. (An Officer and a Gentleman), J.D.’s Revenge is a alternately tough and terrifying – a Blaxploitation gem waiting to be rediscovered!

The swansong of the great Italian filmmaker Federico Fellini (La dolce vita, 8½), The Voice of the Moon emerged without fanfare: it played the Cannes Film Festival out of competition after its Italian premiere and failed to secure distribution in North America and the UK. This new restoration from the original negative seeks to right that wrong and provide the film with a second chance…

Adapted from a novel by Ermano Cavazzoni, The Voice of the Moon concerns itself with Ivo Salvini (Roberto Benigni, Life Is Beautiful), recently released from a mental hospital and in love with Aldini (Nadia Ottaviani). As he attempts to win her heart, he wanders a strange, dreamlike landscape and encounters various oddball characters, including Gonnella (Paolo Villagio, Fantozzi), a paranoid old man prone to conspiracy theories.

Concluding a career that had stretched back more than fifty years, The Voice of the Moon combines the nostalgia of Amarcord (the film is set in Emilia-Romagna countryside of the director’s youth), the surreal satire of City of Women and the naïf-adrift-in-a-brutal-world structure of La strada. Plenty for Fellini fans to get their teeth into.

So, three horror flicks, two gialli, the return of a great comedy AND a Fellini film I’ve never heard of until now? Yep, I’m in. Back with a few reviews shortly as I have three screeners here to get to.