VCI Entertainment has been around for decades (I’ll let you read their “About Us” page at your leisure) and with a library of over 5000 titles from vintage to modern in nearly every genre available in physical, download, or digital rental format, you’ll very likely find something to watch.

The company’s fall 2017 lineup is a small but nice one with a bit of horror, history and a little rock ‘n roll to get the neighbors out of bed and pounding on your door late at night if your TV is up too loud. Hmmm… perhaps they’re all bringing over some popcorn and beverages so they can join in on the fun at that hour… as they’re not getting in otherwise. Anyway, let’s take a peek at what’s coming below the jump. 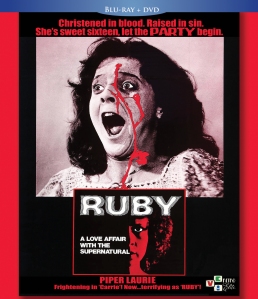 Ruby is a horror film with the emphasis on atmosphere and suspense, but it also contains enough creepy special effects and blood and gore to satisfy the most demanding genre fans. Directed by cult-film director Curtis Harrington (Night Tide, Queen of Blood, Voyage to the Prehistoric Planet, Games, What’s the Matter with Helen? Whoever Slew Auntie Roo?) and featuring an impressive cast including Piper Laurie as Ruby, and Stuart Whitman (Those Magnificent Men in Their Flying Machines, 1965).

The movie begins in 1935, Ruby Clair, beautiful hostess of a Florida gambling house, watches in horror as her gangster boyfriend is gunned down, his bullet-riddled body sinking slowly into a dark, foggy bayou. That same night Ruby’s baby is born. Fast forward to 1951. Ruby now owns a drive-in movie operated by a crew of ex-convicts she has befriended. Her beautiful daughter has never uttered a sound since she was born. One by one her theater employees are savagely murdered. Could it be the work of a rival criminal settling an old score? Or could it be an evil wreaking vengeance from beyond the grave? A psychologist from the state prison tries to find out – and what he discovers is not for the squeamish.

This special BD/DVD combo is the definitive original theatrical version of Ruby, with a 2K restoration, 2 commentary tracks and over 2 hours of video interviews and special features!

One Million B.C. (also available on DVD) is a 1940 American “historical” epic fantasy film produced by Hal Roach Studios and released by United Artists. Boy meets girl – prehistoric style, in this classic of man’s battle to survive against the terrors of the prehistoric world. Dinosaurs, savage nature and man and a gigantic erupting volcano are part of the camp adventure classic.

Big-chested Victor Mature stars as protagonist Tumak, a young caveman who strives to unite the uncivilized Rock Tribe and the peaceful Shell Tribe, Carole Landis as Loana, daughter of the Shell Tribe chief and Tumak’s love interest, and Lon Chaney, Jr. as Tumak’s stern father and leader of the Rock Tribe. Chaney’s billing differs from that of his home studio Universal Pictures in that Hal Roach elected to retain the “Jr.” instead of billing him under his father’s name, possibly because Roach was co-directing the film with his own son Hal Roach, Jr. The film was the top grossing movie of 1940 and was nominated for two Academy Awards for its special effects and musical score. (cr. excerpts from Wikipedia)

You know you want to see a trailer for this 1959 gem, so go grab the kids if you have them and let them check it out and maybe watch their jaws drop right before they tell you you’re old and go back to their cell phones (darn kids!).

Mussolini: The Untold Story Ha! I’d forgotten all about this 1985 NBC mini-series (I saw it back when it was first aired), but it’s back and at the perfect time on a few fronts.

The rise and fall of the Italian fascist dictator… He was powerful–arrogant–mesmerizing. He dreamed of a new Roman Empire–and himself as its new emperor. As Italy’s leader he was at first revered…then feared…and ultimately despised. But at the height of his power, the crowd would roar “Il Duce”–and the man who would step forward to receive the accolades was Benito Mussolini. But the head of the country was also the head of a family–a devoted husband, father and godfather. Now the story of that man–a gripping, original, seven-hour NBC miniseries starring superb actor George C. Scott, giving his most magnificent portrayal ever as the infamous dictator……Mussolini.

Satan’s Cheerleaders Written and Directed by cult favorite Greydon Clark (Joysticks, Without Warning, The Forbidden Dance) and featuring an all-star cast that includes John Ireland (Spartacus), Yvonne De Carlo (The Munsters), John Carradine (The Grapes of Wrath) and Jack Kruschen (The Apartment), I’d call this a guilty pleasure you’ll enjoy with a smirk or three.

Benedict High School’s cheerleaders aren’t shy and sweet. The football team knows them well – and Billy, the school’s disturbed janitor, would like to. In the locker room, the girl’s shower and dress, unaware of the evil eyes which secretly watch them. They don’t know that a curse has been placed on their clothes. And they don’t know that their trip to the first big game of the season might sideline them for eternity. Will the cheerleaders succumb to the dark ritual of sexual sacrifice and death that’s been plotted for them? Only those who dare watch will know!

The Aftermath  This sounds like a doozy: A spaceship returns from deep space to find the Earth in “The Aftermath” of a nuclear and biological war. The streets are filled with mutated survivors feeding off the weak and a Manson-like figure called Cutter, Sid Haig, (The Devil’s Rejects, House of 1000 Corpses) is reigning terror down on all others.

Cutter and his gang of mercenary thugs are systematically murdering all the male survivors and enslaving women and children. Most of his targets are easy, but all that changes when Cutter confronts astronaut Newman (Steve Barkett, Empire of the Dark, Dinosaur Island, Dark Universe), and the woman Sarah (Lynn Margulies) he finds and falls in love with, and the young child Chris (Christopher Barkett). What follows is a cat and mouse game of violent and spectacular proportions with no less than Earth’s survival in the balance.

I haven’t seen all of these and it’s been decades since on at least one, so yep, my bucket list just got a few more additions.