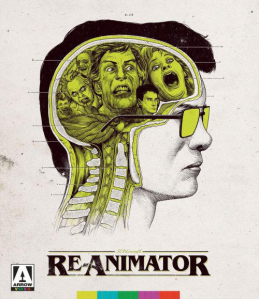 Well, wow. As someone who’d missed out on the film during its theatrical run, I’ve always wanted to catch Re-Animator to see what all the fuss was about. Well, Arrow Video has just released an outstanding 4K transfer of both the theatrical cut and much longer Integral version that’s not not only a must-buy, it’s one of their best releases to date.

Amusingly enough, I’d gotten a copy of Bride of Re-Animator a while back, but stayed away from watching it because I wanted to see the first film before the sequels. Yep, I’m crazy like that. Anyway, yep. This movie is pretty damn great stuff and oh yeah, it’s not for the kiddies at all.

In a nutshell, through experimentation in Europe, Dr. Herbert West has discovered the process of re-animating a dead body (with mixed results) and has come to Miskatonic University in Arkham to continue his work. Quickly finding a room and basement space with fellow med student Dan Cain (Bruce Abbott), the not-so-good doctor gets cracking on “perfecting” his reagent. Complicating matters is Dan’s romance with Megan Halsey (Barbara Crampton), who just so happens to be the daughter of the school dean (Robert Sampson). Add in very creepy doctor Carl Hill (David Gale) West dismisses as inadequate who has icky designs on Megan and stir well. Expect that pot to blow through the roof before the end credits, by the way.

Director Stuart Gordon gets major mileage from his gung-ho cast to the point that it’s the best work some of them are the most well known for. What also makes the film work is the amount of comic relief on display. Even the most serious or gory moment has some sort of punchline that quickly moves you on to what’s next. West’s reanimating a dead cat and later, a muscular cadaver both have hilarious payoffs that might be painful to watch, but you’ll be chuckling nonetheless. 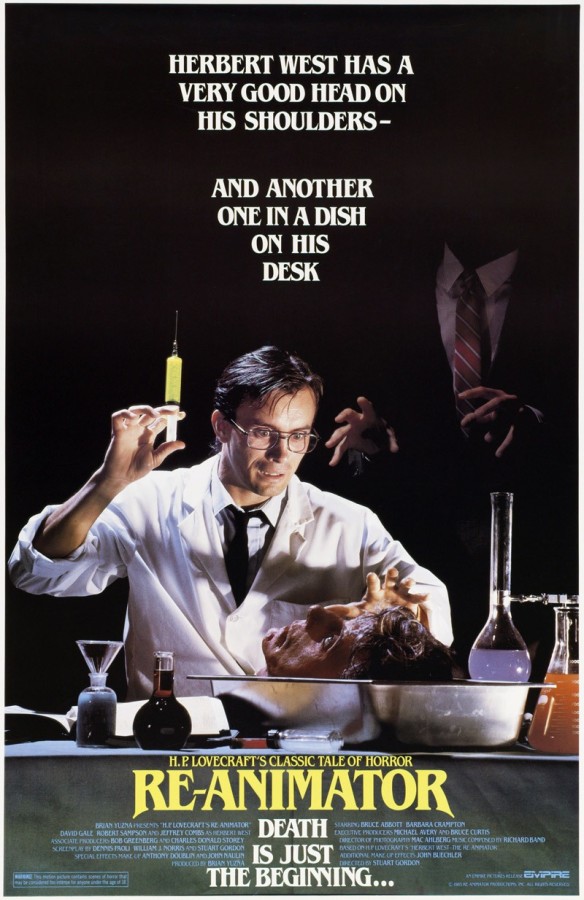 Both the Unrated US cut (86 minutes) and the international Integral Cut (105 minutes) are here for your perusal along with a wealth of special features well wroth checking out. The big differences between the two versions is the addition of a weird plot element in the longer version where Dr. Hill exhibits the power of hypnotic suggestion on a few characters. It chugs the Integral version to a crawl and comes off as unnecessary given his already strange behavior towards Megan as well as his designs on stealing West’s thunder.

There’s a boatload of special features to skim or just jump in and discover including a reprint of the 1991 comic book adapting the film, Digipak packaging featuring newly commissioned artwork by Justin Erickson, and a Collector’s booklet featuring new writing on the film by writer Michael Gingold. As for what else is on those discs:

Amusingly enough, while the Lovecraftian Cimema guide was a fun watch, clearly the guy doing the piece hadn’t seen a few not so classic films that share a similar vibe such as Equinox or maybe Phantasm. But hey, at least Alien, The Evil Dead and In The Mouth of Madness all get mentions.

As for Bride of Re-Animator… Okay, I watched the special features a while back and I know it’s not going to be as killer a film. That said, the more over-the-top practical effects work is something to behold. I’ll get to that review in a bit, though.